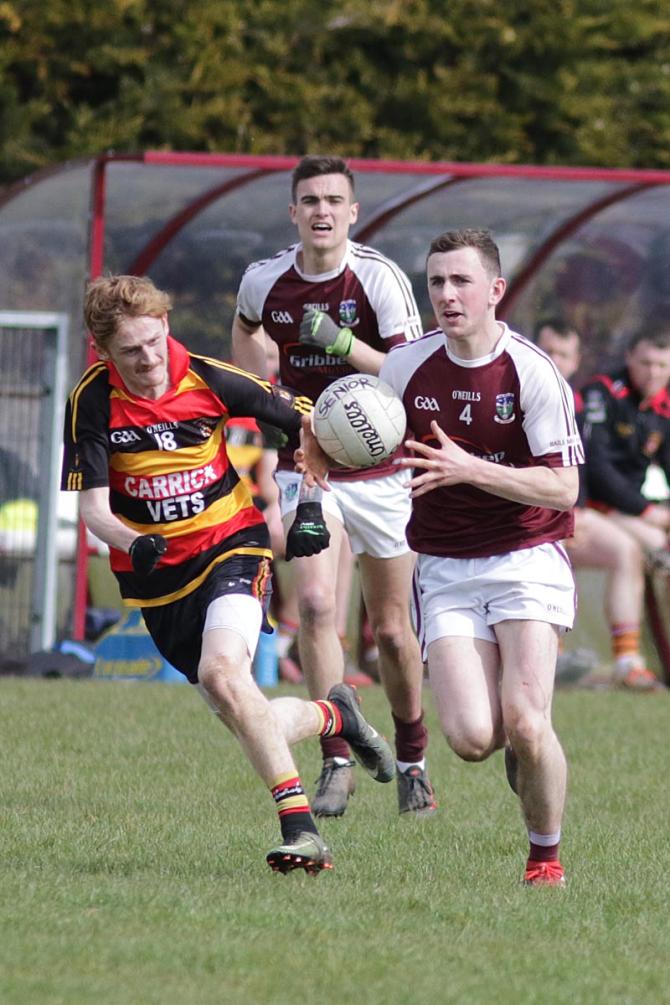 Ballymacnab beat St Patrick’s, Cullyhanna by the narrowest of margins on a 4-11 to 3-13 scoreline. Pictures by VINCY LOUGHRAN

A DETERMINED   'Nab overcame by a single point a 'Saints' team who were one of the form teams in Senior A for the last four years. It was a very close 'end-to-end' very entertaining, absorbing and competitive game.

Saints entered the game showing a high degree of intent and were soon three ahead through Kieran Hoey, Conor and Aidan Nugent points. The 'Nab were having 'none of this' and duly conjured up two snap goals for a two point lead via a Gavin McParland penalty and a Kieran Hughes goal after good approach work by Tony McKee and James Gray.

The pace intensified as Aidan Nugent and Rory Grugan exchanged before Saints made another bid for likely victory with an opportunist Malachy Mackin goal and a following brace of Aidan Nugent points.

Saints were now two up but 'Nab were in no mood to let them out of sight and by the interval Rory Grugan had landed a quartet of points for a narrow interval lead at 2-5 to 1-6.

Saints hit the start of the second half with blistering pressure and penetration, hitting a goal and three points inside six minutes for a four point lead through three Aidan Nugent points (2 frees) and a 'palmed' Shea Hoey goal.

Inside the next four minutes the 'Nab replicated the Saints pressure and penetration with a goal and three points of their own through Jack and Rory Grugan (2, 1 free) points and a typical Gavin McParland poacher's goal.

It was now the 'Nab who were two up but after Aidan Nugent and Ryan Watters had exchanged points, a bout of sustained play saw Saints go four points up again via three Aidan Nugent points (2 frees) and a forcefully hit Gary McCooey goal when the full back surged soloing forward. The 'Nab had give so much energy and effort to the game that they refused to give up so late in the game. They literally overwhelmed a stunned Saints with Gavin McParland's opportunist goal and Rory Grugan's pointed free taking the sides on level terms into injury time.

In the first minute of injury time Rory Grugan posted the winning point from an exquisite Brian McCone pass.

The 'Nab will be confident and resolute after a stirring victory with the imperious Rory Grugan, Ryan Kennedy, Mickey Beagan, Gavin McParland and Kieran Hughes best in an excellent performance.