Andrew is UGAAWA Player of the Month 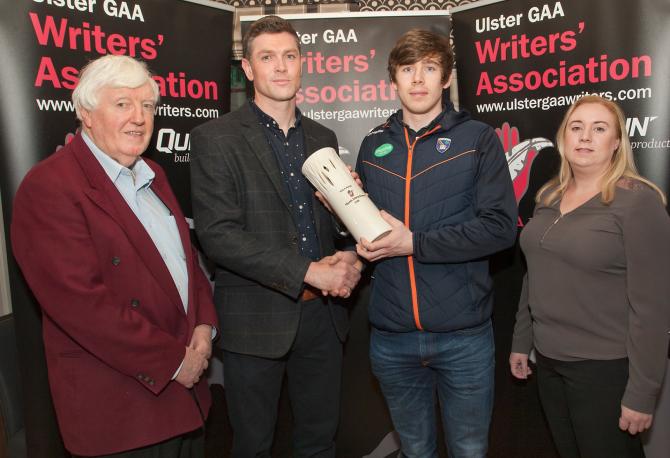 ARMAGH  and St Paul’s player, Andrew Murnin, was recently declared as the Ulster GAA Writers Association ‘Player of the Month’ for March, 2018.

Andrew now a cultured and potent full-forward, after switching from his earlier career position of midfield because of several hamstring injuries was Armagh’s most effective and influential player of Armagh’s promotion gaining National League campaign.

In the subsequent NFL Division Three final, Andrew was declared ‘man of the match’. Andrew earned the coveted monthly award against some stiff opposition viz. Monaghan’s Kieran Hughes and goalkeeper Rory Beggan, Slaughtneil’s Tina Hannon from camogie and the in-form Tyrone player, Lee Brennan. Andrew won an All-Ireland medal with Armagh minors in 2009, as well as an Armagh Intermediate Championship medal with his club plus now two NFL medals.

Andrew is looking forward to the Ulster Championship clash with Fermanagh and expects it to be a fiercely tight and close game.
Andrew was presented with his much sought after Belleek pottery vase by Mark Lunney, sales manager of the UGAANA’s sponsor, Quinn’s Building Products. A fitting and much deserved award for Andrew, given the high quality performances he’s delivered for Armagh to date this season.