Armagh up for a 'Ferm' victory 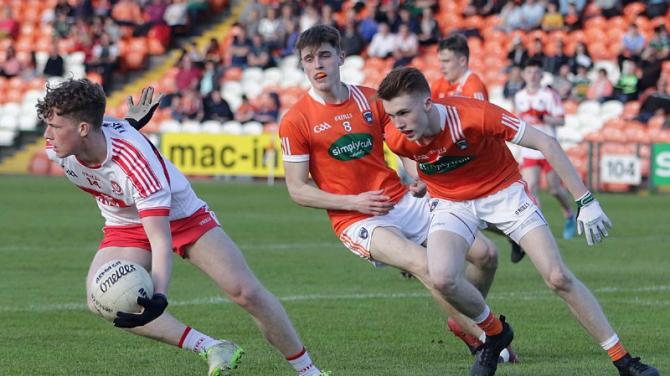 IN a recent provincial newspaper article, 11 former legends of the GAA county championship scene, picked Tyrone, Donegal and Fermanagh to be the most likely to win the Ulster Championship - three neighbouring counties who can be aggressive as well as stylish with Armagh meeting one of them in the Ulster quarter final this Saturday evening at 7pm in Brewster Park, Enniskillen.

In that same article, six of the 11 legends tipped Fermanagh to beat Armagh in Saturday’s opening tie and with seasoned ex-players, Rory Gallagher and Ryan McMenamin managing the ‘Ernemen’ they will expect to beat the ‘Orchard’ on home ground this Saturday.

To add spice to the challenge, it’s rumoured that Fermanagh’s management have used Armagh’s recent sojourn at a training camp in Portugal as a motivational tool, perhaps ‘the world and its mother is against us’ attitude to inspire their team.

I’ve no doubt Rory and Ryan will expect their team to win and that perception can quickly be accepted by their team. Perhaps not yet though as in a recent newspaper article, Ryan Jones, Fermanagh’s midfielder, suggested that the ‘Ernemen’ will need a good start if they are to beat Armagh. Is there a danger that Fermanagh could suffer from complacency because of all the optimism about their chances of winning.

Armagh will certainly not be complacent against Fermanagh as games between them have always been tight, close and attritional and I expect this week’s encounter on the tight pitch that is Brewster Park will be even more aggressive this time.

It is worth pointing out that, despite all the positivity towards Fermanagh, the Ernemen have never beaten Armagh in the four years of Kieran McGeeney’s reign as the Orchard County manager.

They did not meet in 2017 but as luck would have it, Down were relegated back to Division Three, while Armagh failed to gain promotion out of Division Three, largely through conceding three goals against Tipperary in their final league game with ‘Tipp’ promoted with Louth.

Both are back in Division Three in 2018 which saw them draw their league game, 0-7 each, in Brewster Park. Armagh were crowned Division Three champions later in the year as by the same total scores, 17 each, the Orchard eclipsed Fermanagh by 1-16 to 0-17, with Andrew Murnin scoring the crucial goal in the 53rd minute, after a deft pass by Gregory McCabe.

Fermanagh are a team that always look capable of causing an upset - a bit like Donegal they’ve always produced good players, eg, this year the Jones’ brothers, the Quigley and Corrigan brothers and the Cullen brothers making a total of 10 possible starters bearing in mind that a ‘brotherly bond’ can be inspiring. Good players, yes, but it’s regularly perceived that a lack of discipline, (Sean Quigley sent off after two minutes in this year’s league encounter) and commitment has been their downfall.

Fermanagh have always essentially been a defensive team and this season they have largely relied on the free-taking expertise of Seamus Quigley to win games.

They will thus want an attritional game with Armagh as they won’t be able to win a ‘shoot-out’ with McGeeney’s men, endorsed by Armagh’s ‘score difference’ in the 2018 league being ‘33’ as opposed to Fermanagh ‘19’ even though they both had the same ‘games record’ of five wins, one draw and one defeat in the 2018 National League campaign. If Saturday’s game develops into a counter-attacking game, I feel the Ernemen have a chance of victory.

This year, Armagh experienced a shift in attitude, I feel, with noises coming out of the camp very positive including a total ‘buy-in’ into management’s approach and with an excellent and rewarding National League campaign this year, Armagh are capable of securing an Ulster title once again.

Given rumours of ‘fake’ information coming from many county camps this summer, predicting a starting team for both counties would be a foolish thing to do. What I can do is name the respective teams which faced each other in the National League Division Three final and let readers speculate on any changes they feel will be to these teams come this Saturday evening.

The teams in the Division Three final were:

The only changes perhaps for that Armagh side for Saturday’s game would see Ryan McShane, Gavin McParland and possibly Kevin Dyas starting.

Mulrone and McCusker are fast raiding wing backs capable of scores while James McMahon is an effective ‘sweeper’ in their rigid defensive system.

Tom Clarke and Aidan Breen are excellent play makers and the Quigleys, Sean and Seamus, Conall Jones and Tomas Corrigan are proven and prolific scorers while Eoin Donnelly and Ryan Jones will be seen as the more dominant midfield.

Armagh tend to play better on the larger, wider pitches but Fermanagh will relish playing on their tight narrow pitch of Brewster Park. It will be a battle.

Fermanagh beat Armagh in an All-Ireland quarter-final (the Orchard were reigning Ulster champions) by 0-12 to 0-11 in Croke Park with Tom Brewster pointing a superb point from way out on the left wing in the final moments. That’s all in the past.

On Saturday, I expect Armagh to win no matter what the score is. Good luck, Armagh.