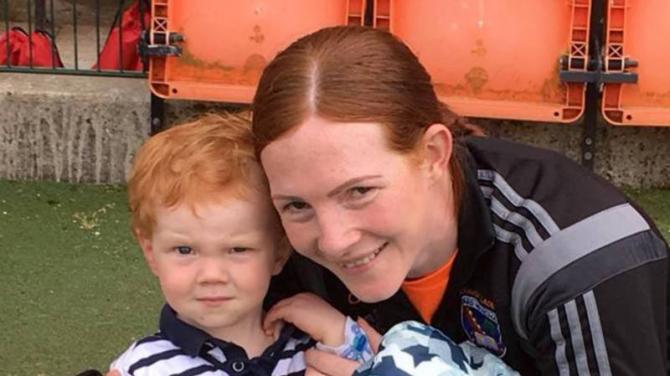 WHEN  Armagh’s adult teams from the two female codes shared a National League double bill in the Athletic Grounds back in February, one fascinating footnote was the age gap between the two Orchard captains.

Ladies football skipper Caoimhe Morgan was a remarkable 15 years and 50 days older than her camogie counterpart Leah McGoldrick, but both are formidable leaders who happily put their bodies on the line for the Orchard cause.Although she turns 35 this summer, the footballing fire in Morgan’s belly burns as brightly as ever while McGoldrick’s maturity, mental toughness and physicality set her apart from typical teenagers tentatively making their way in the game.

Whatever about the age gap, the two Orchard captains share admirable qualities like resilience, character, hunger and determination and are manifestations of the old adage about being old enough or young enough if you’re good enough.As a prominent rugby player and avid rugby fan respectively, it won’t have been lost on McGoldrick and Morgan that the two Ulstermen who started each of Ireland’s Grand Slam matches this spring, captain Rory Best and record-breaking try-scorer Jacob Stockdale, were the team’s oldest and youngest players respectively.

McGoldrick has the distinction of having represented her province at adult level in two separate sports, rugby and camogie, while still at school and Morgan is Armagh gaelic’s longest-serving player of all time.When Morgan started her first spell as skipper of Armagh, McGoldrick was aged just 10 and in fact the last time anyone under 30 captained the Orchard county’s footballers was when O’Hanlon led them to that unforgettable Ulster title triumph in Clones in July 2014.O’Hanlon had turned 30 the day before leading them to a comprehensive victory in the following month’s All Ireland quarter-final while her successors Tennyson and Morgan are both older, though the current captain isn’t showing her age and injuries can happen to anyone.

Last summer Morgan had a significant scare with a knee injury but what was initially feared to be a cruciate rupture in April proved less drastic and she was back in the orange jersey for Armagh’s All Ireland qualifier against Westmeath in July.

This time McGoldrick was left sweating after feeling something go in her knee at training in March but an MRI scan which confirmed cartilage damage means she hopes to return to action sometime in June.Although not as serious as perhaps feared, McGoldrick is set to miss Armagh’s provincial championship semi-final against neighbours Down later this month and the injury also cost her the chance to represent Ulster in this weekend’s interpro tournament.While McGoldrick’s injury kept her out of the second half of Armagh’s NCL programme, Morgan by contrast is one of only four players to have been on the field for every minute of the Orchard’s campaign in this spring’s NFL.

Armagh’s promotion bid ended with an agonising one-point defeat to Tipperary in last month’s semi-final but the captain’s impressive personal performances at full back have been among the positives of this first phase of the season.Always a ferocious competitor, Morgan’s speed off the mark remains a great attribute and that turn of pace allied to her shrewd reading of the game as a hugely experienced player and undeniable bravery have led to countless blocks, intercepts and other turnovers.

Based on current form never mind reputation and standing in the sport, Armagh’s most experienced campaigner would have appeared the obvious choice to captain Ulster had their attempt to win a magnificent seventh interpro title on the trot gone ahead this Saturday as scheduled.Unfortunately for the in-form Orchard defender, the tournament has been postponed until October but if Armagh have a good summer she should still be firmly in the frame for a provincial leadership role then.Indeed if the Orchard can secure Ulster Championship success followed by a good All Ireland run, Armagh’s representation in the provincial panel should be boosted significantly compared to what might have been expected now.

With O’Hanlon set to miss her first series in over a decade due to a clashing British SuperLeague netball game, Aimee Mackin, Aoife McCoy and Morgan appeared to be the only three Orchard certainties for an Ulster squad at this stage of the season.Several other Orchard hopefuls may have suffered from Armagh being behind top flight sides Donegal and Monaghan plus second division finalists Cavan in the National League pecking order.

That could have counted against provincial call-ups for the likes of Fionnuala McKenna, Kelly Mallon, Lauren McConville, Clodagh McCambridge and even veteran Sharon Reel, who has been so consistent in the orange jersey over recent seasons.McKenna, McCambridge, captain Morgan and her sister Sarah Marley are the quartet who have been on the field for every minute of Armagh’s matches so far this season with Aimee Mackin and McCoy the other two to have started all eight games.Sharon Reel didn’t start the opening game after back spasms during the week prevented her training, Mallon was rested against Laois after fresh achilles concerns while Carrickcruppen pair Marian McGuinness and Rebecca O’Reilly have been in the initial line-up for all but the Cavan clash.F

our players have had six starts with former captain Tennyson and Blaithin Mackin each coming back in via the bench after being unavailable for one match, with McConville left out of the team for the first two matches after a late start to pre-season.Caroline O’Hare has been in nets for the last six games after initially asking to be considered in her club position of forward, so Armagh have 14 players who have started the vast majority of fixtures so far in 2018.The other core regular would be O’Hanlon though the triple All Star was away with the Northern Ireland netball team at the Commonwealth Games in Australia for the last three regular league games and then brought back off the bench in the semi-final against Tipperary.

Beyond what has emerged as the core starting team, Megan Sheridan from Forkhill has had four starts as did St Peter’s prospect Tiarna Grimes before suffering a dislocated shoulder during the Waterford defeat on Easter Sunday.Anna Carr was in nets for the first two games of the season while Louise Kenny had two starts before her latest serious knee injury and Dromintee’s Shauna Grey has also been in the initial line-up on two occasions.Newcomer Niamh Murphy from Mullaghbawn and Silverbridge schoolgirl Niamh Reel have had a single start apiece making 22 starters in total for Armagh during the first phase of the season, with Aoibhean Jones and Ellen McVerry also seeing some action off the bench.Although listed as squad members, siblings Niamh and Catherine Marley are recovering from major knee operations so haven’t featured this season, while Maebh Moriarty, Caoimhe Murray and Tanya McCoy were unused subs in the semi-final after recently being added to the panel.

Diminutive Shane O’Neills forward Jones, the only player other than Murphy to have made her first Armagh appearance this spring, has come off the bench on four occasions as has Grey, with Niamh Reel introduced three times.Still on statistics, Aimee Mackin predictably leads the way in terms of the Orchard charts and has actually top scored in all eight games so far this season in accumulating an aggregate tally of 13-40, including two penalties and nine frees, out of Armagh’s 28-102.Aoife McCoy has scored 4-13 with 4-7 for McConville and McKenna kicking 2-13 including three frees.

Fifth on the list is Blaithin Mackin with 3-5 followed by Mallon’s 1-8 which includes a single right-footed free.O’Hanlon’s scoreboard contribution has been seven points with her clubmate McGuinness chipping in with a very useful 1-3 while Grimes and Niamh Reel are the other Armagh scorers with three points each.