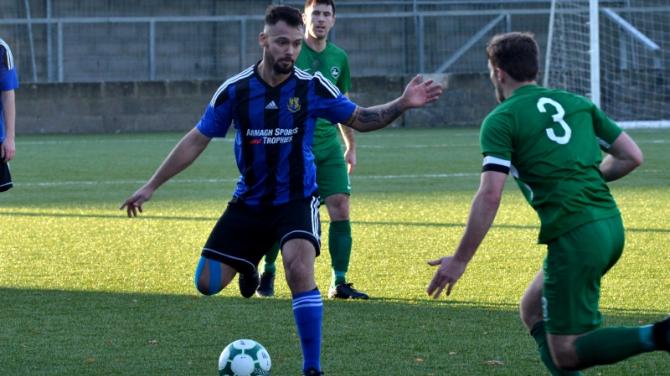 ARMAGH City welcomed back Reece McInearney after long term injury and Joe Kerr decided to make a few positional changes for their match against Newington.

Andy Wilson moved into the centre and Daniel Courtney to left midfield, with Stefan McKenna still out injured, although he trained during the week so should be available for selection for the next game, which unbelievably is on December 8, to Portstewart, which means that out of eight Saturdays City only will have played ONE game!

The match started with both sides trying to gain an advantage over the other but as play ebbed from end to end neither could dominate, but on 20 minutes Armagh went ahead after the ball was played out to the right side of the box and Wilson fastened onto it, strode forward and calmly slotted home.

The rest of the opening half was similar to the early part with both sides cancelling each other out, but the visitors were guilty of several badly timed tackles resulting in City players having to receive attention, but Danny Devine in the City goal was relatively untroubled in the opening half with McInearney, Wilson and Courtney, aided by Ryan Corrigan, always posing a threat up front. Luke Grimley and Paudie Judge at the heart of the defence with Conor Kerr and Sean Mallon held firm to snuff out any potential danger from Newington.

Conor McAnallen and Ciao Lobo in defensive midfield also covered plenty of ground in linking up with their colleagues both breaking up attacks and starting their own and the home side were worth their half time lead.

The 2nd half started in much the same fashion but in a change to recent performances when they were up against more aggressive and more physical sides the Armagh side to a man stood up and indeed refused to buckle under pressure, although, early in the half, Lobo, who had been injured in a poor tackle in the first half, had to come off to be replaced by Ethan Bates.

As Newington tried to get on level terms McAnallen put in several great interceptions and City were now relishing the battle of wills in the middle of the park and Wilson, who received a subtle headed flick on from Courtney, was taken down by a bad challenge although the free awarded was cleared upfield. Shortly after this McInearney had to leave the field having taken a few hefty tackles and was replaced by Adam Pedlow, but by this stage City looked the more likely to score a goal.

The home side gained several corners down the left flank and this is where the second goal came from. After Wilson forced one, Corrigan sent in a superb delivery towards the goal and Bates was on hand to force the ball home putting City two goals ahead in the 75th minute.

Stung by this setback Newington applied serious pressure but the Armagh defenders stood tall and yielded no ground with the only shot on target a well struck long range effort which Devine dived to his right to divert for a corner which was routinely dealt with.

Courtney then made way for Rory Duffy adding fresh legs to the proceedings and Armagh saw the game out to its conclusion to take their first win of the league after previously having drawn the last two games with other results for the teams nearest them going their way.

This was the best team performance by City this season and the team showed a strong steely mentality as they went about the task of securing three points with every player in the starting 11 plus the three substitutes complementing each other to achieve this, but unfortunately the scheduling means that it will be four weeks to the day before they play again and this loss of momentum will not be helpful.

Efforts by the committee to bring a league game forward have been unsuccessful and the only chance of getting any football will be if a friendly with someone from outside the league can be arranged, but at the moment this is not on the horizon, however any developments will be advised in the local press and facebook.