Armagh qualify with second half blitz 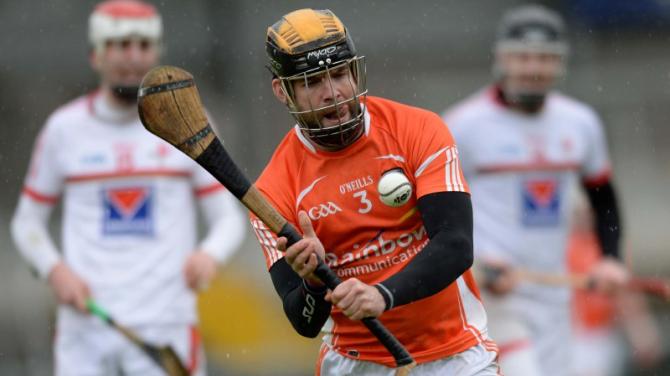 ARMAGH produced a stunning second half display at Pearse Park, Longford, on Saturday to a book a place in the Nicky Rackard Cup semi-finals, writes Joe McManus.

Hurling out of their skin in the final 20 minutes, Padraig O’ Connor’s young charges swept a Leinster opposition aside that had the better of the opening exchanges.

Armagh replaced their goalkeeper Fintan MacConchoille, with Simon Doherty at half-time and the regular custodian’s three points contributed immeasurably to the dramatic swing around.

Middletown’s Dean Gaffney who notched up 0-16 in the drawn game against Warwickshire.once again top scored hitting 0-13, twelve from frees.

The Orchard also had a goal disallowed close to half-time on the ‘square ball’ ruling and Eoin McGuinness had a goal shot come off the post, early in the second half, when Longford’s lead had been cut to the minimum (0-13 to 0-12).

David Buckley accounted for most of the Longford scores, mainly frees.

Buckley opened the scoring in the first minute and his side were soon 0-5 to 0-1 up, Odhran Curry pointing for the visitors.

Despite the poor start, Armagh held their nerve and by the 21st minute trailed by double scores (0-8 to 0-4), Dean Gaffney converting two frees and Eoin McGuinness with a super effort from play.

Whilst they outscored the hosts 0-4 to 0-3 over the second quarter, Armagh just could not get their noses in front. Dean Gaffney scored all four from dead all strikes, leaving the half-time score 0-11 to 0-8.

On the restart, Danny Magee pulled another one back but Buckley replied with two, keeping Longford ahead (0-13 - 0-9).

This was early in the half and who would have believed that Longford would only register another solitary point.

The Armagh onslaught was signalled by a Shaun Toal white flag and in this rapid scoring period, points from Magee and Gaffney left only the minimum between the sides.

Armagh had found their rhythm, Shaun Toal’s 44th minute point made it all square and two minutes later Gaffney with another free had the Orchard ahead for the first time.

It was a lead never to be relinquished.Gaffney, this time from play, eased Armagh two ahead, and whilst Longford responded, leaving it a one point game once more, they were not to score again.

Armagh took over the driving seat and three more Gaffney points changed the scoreboard to 0-18 to 0-14 with 57 minutes gone.

It was all Armagh, midfielder Stevie Renaghan split the posts from distance and Gaffney widened the gap to six.

Over the next few minutes Simon Doherty put his own stamp on the proceedings with three excellent scores and Danny Magee with his third helping rounded off an incredible second half performance.

Armagh’s comeback was really initiated just before half-time and once they got the bit between their teeth in the second period, there was no stopping them.