Orchardmen heading for the Qualifiers after Ulster exit 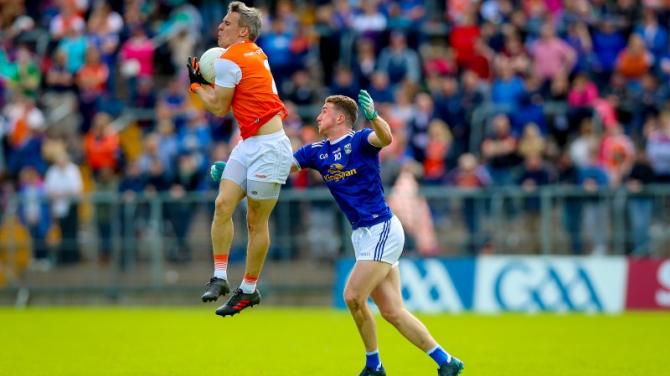 ARMAGH will make their third appearance in four weeks at Clones when they take on Monaghan after losing to Cavan in Sunday's Ulster Championship replay.

Armagh manager Kieran McGeeney quite rightly pointed to the chances his side created and missed and had half of those gone over or under the bar then it could have been a different result.

But not many teams will win a game by conceding 23 points and Armagh made mistakes by leaving players isolated in battles they were losing.

For the first time in a while, the team that finished the game didn't impact the way we have come to expect and while it was an enthralling shoot-out, Armagh can take lessons from the defeat and be positive against a Monaghan team that didn't look too sharp on Sunday either.

The Armagh boss was proud of his players and said the missed chances were his sides' downfall.

“I am proud of the fellas we really went at it but when you play a high pressed game it leaves you open at the back and when you miss four or five goal chances then it is going to be tough,” said McGeeney.

“Cavan took their scores and that is the difference.”

“I think we needed to bag a goal because we are good at getting them. I think the lads know themselves they missed chances and that can affect you, sometimes you don’t pull the trigger when you should or you’re a split second too slow.

“Even after a bad start, Rian and Jamie really came into it and we pushed on but it was an up and down game and then at the end they were able to knock over more scores. It is tough but, in fairness, they had their shooting boots on.

“It is a high pressed game and it was going to be open and there was going to be chances and you just have to take them. The difference between the two teams was that they scored great scores from unreal angles whereas we missed the simple ones.

“We had nought from five chances inside 14-metres, so that is going to cost you. I am proud of the fellas, they did what we asked, they opened them up but we just have got to be more ruthless in front of the nets.”

Armagh did come roaring out of the blocks but they just couldn't buy a score. In the first half they kicked five wides, struck the post and had two goal chances snuffed out. In the first 15 minutes, which they bossed, Armagh trailed 0-1 to 0-2 and then Cavan pulled away to lead 0-09 to 0-02, which forced the Orchard from looking casual in front of the posts to trying to force the issue.

Rian O'Neill got Armagh off the mark with a converted free and some great pressing created an opening for Jamie Clarke to bag a goal but he snapped his shot narrowly wide.

What should have been a dream start began to unravel as Charlie Vernon, Jemar Hall, Aidan Nugent and Rian O'Neill all kicked wide, O'Neill also hit the post as Cavan's lively Dara McVeety, Gearoid McKiernan and Conor Moynagh found the target.

Cavan had tapped over nine points before O'Neill grabbed his and Armagh's first point from play on 24 minutes. And five minutes later the change came when Campbell replaced Nugent and Aaron McKay came on for Vernon, who had struggled with McKeirnan at full-back.

Clarke's confidence looked gone when he hestitated firing over a point but he then went on to produce a great performance. Campbell was fouled twice and Clarke and O'Neill converted the resultant frees, then Clarke and Niall Grimley linked up for another point.

Armagh had reduced the gap to 0-08 to 0-11 at the break but with two sweepers in the Cavan team and no sweeper for the Orchard side the men in orange were scratching their heads as to how they were behind.

The game continued in a shoot-out. McVeety was winning his battle against Forkhill's diligent defender Paddy Burns, but strangely there was no switch to try using Shields, James Morgan or Paul Hughes on Cavan's talisman.

Cavan extended their tally to 13 points before Armagh responded with an O'Neill free, he added another and then Jamie tapped over too and, after a super midfield fetch by Jarly Og Burns, Clarke grabbed another point to leave only a point between the teams.

The game returned to a straight shoot-out but Cavan were getting scores too easy and they pulled away again. Substitute Rory Grugan and Campbell tagged on scores and Clarke added another to again pull Armagh back into the contest. With an hour played, Armagh trailed 0-16 to 0-17.

It was set-up for a grandstand finish, but it was the Blues that blew Armagh away, outscoring the Orchard six points to one.

That one point came from Shields who received a perfect pass from Clarke and his shot sizzled over the bar, when the Orchard wished for a goal. Had it have gone in, only a point would have separated the sides, but Armagh looked spent as they had gone to the well too many times to get back into a game time after time.

Brendan Donaghy will be back to face Monaghan and Oisin O'Neill looks to be raring to go and with these two on the pitch in the closing stages of the game, then Armagh have a great chance and McGeeney feels that the nature of the backdoor suits his side.

“There is probably not as much fear in it because it is last chance and it tends to suit our football because we tend to play that way,” said McGeeney.

“It is like anything else, sometime you need a kick-start and if you can get that then you can get on a roll and if we can get to that we might get closer to the super eights.

“They [Cavan] scored more than us but they didn’t have any goal chances whereas we had five, so it is hard to take when you don’t take those. They are a good team and I would say we are up there with them but we didn’t take our scores today.”

McGeeney is in his fifth year of a five-year plan and he feels there can be a bright future for the team but he isn't writing this season off just yet and has urged his players to rise to the challenge in the Qualifiers.

“I do think we have a young team, our main players such as Rian and Jarly Og and even the likes of Rory and Aidan, they are still only 26- 27 and they are among the oldest players, we have a lot of good players and I think the future is bright for them.