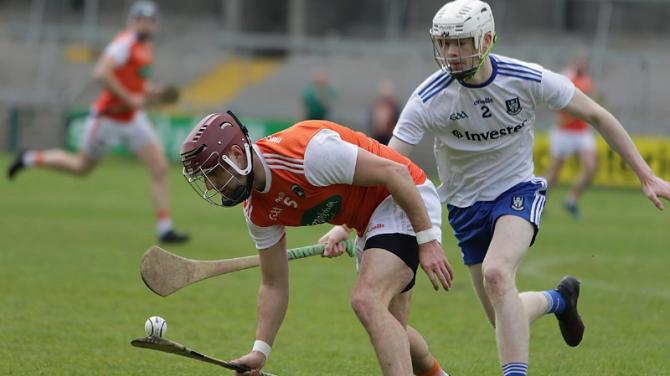 They will take on Sligo with the winners being elevated to the Christy Ring Cup next season.

Armagh has experienced mixed fortunes in the competition since its inception back in 2005, winning two finals and losing three.

Two years later they were back at headquarters taking on Louth in the final and on this occasion (2012) their victory was much more comprehensive (3-20 to 1-15).

Since that they have lost three finals, beaten by Mayo,Roscommon and Derry.

At the round robin stage, Armagh were in Group 1 with Monaghan, Warwickshire and Longford. They defeated Monaghan at the Athletic Grounds but only managed a draw against Warwickshire in London. Armagh thought they had the game won when Danny Magee rippled the Exiles net with practically the last piece of the action. However, there was still time left for their opponents to stage an immediate attack and equalise with a goal of their own. To rub salt in the wounds, the goal was scored by a former Armagh Cuchulainn’s player.

Armagh only needed a point from the Longford game to qualify for the semi-final, a game which they won down in Longford.

Their semi-final opponents turned out to be neighbours Tyrone,runners up in Group 2. The Red Hands had beaten them earlier in the year in the NHL Division 3A. But there was to be no repeat, Armagh finishing strongly in a tense and exciting battle, to emerge 2-19 to 1-20 victors.

Sligo in the round robin stages were in Group 2 with Tyrone, Mayo and Louth. And as Group 2 winners, they met the runners-up in Group 1, Warrickshire whom the defeated 2-21 to 2-17 to book their place in this final.

After losing the Division 3A hurling final to Roscommon (0-14 to 0-11), Armagh were left to pick up the pieces and prepare for the Nicky Rackard, which manager Padraig O’ Connor vowed they would do.

Sligo also lost a league final, beaten in the Division 3B decider by Longford, having comfortably defeated the same opponents in the final round robin game. They were beaten by two points in extra time. Gerard O’ Kelly-Lynch struck 1-7 for the Yeats County with Kevin Gilmartin also notching two goals. These are two players Armagh will have to keep a tight rein on. It has been a hugely positive season for Sligo and they will be delighted with the strides they have made.

Armagh will be aware they have already lost two finals to Connacht opposition - Roscommon and Mayo and will not want to lose a third.

It’s really a new look Armagh team, management have been working hard along the lines of development over the past few seasons and would appear to have a settled and purposeful side that lacks nothing in terms of grit, determination and work rate.

It could be argued that Armagh depend largely on the striking skills of free taker Dean Gaffney, who totted up the grand total of 39 points from the games against Warwickshire, Longford and Tyrone. But they are far from a one-man band.

Odhran Curry and Paul Gaffney are forever in the thick of the action in the middle third while up front Danny Magee, with his eye for goal, Shaun Toal, Eoin McGuinness, Dylan McKenna, Stephen Renaghan and Paddy McGrane constitute a hot handful for any defence.

There would appear to be very little between these two final contestants and it’s really all down to whichever side puts it together best on the day. Armagh have a tradition in the competition, being no strangers to Croke Park, which should stand to them in good stead. They have been unfortunate to lose a number of finals, so they are due a rub of the green. If battling qualities were suffice to get them over the line,Armagh would have few worries but it’s scores that count, so it’s imperative for the Orchard representatives to keep the scoreboard busy in their favour.