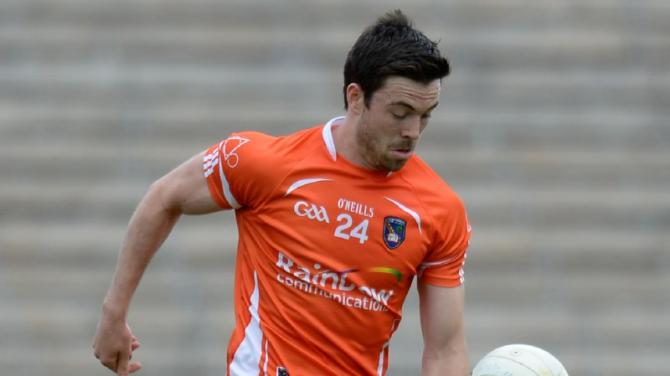 WHILST Armagh manager Kieran McGeeney ponders over his future as Orchard boss, he should find it reassuring that the County is standing firmly behind him, writes Joe McManus.

Even many of his arch-critics, those who disagreed with his methods and questioned his managerial ability are beginning to change their tune, having started to see the fuller picture.

The fact that former captain Aidan Forker has openly stated that he would be “gutted” should Geezer walk away is clearly an endorsement of some significance, no doubt reflecting the overall thinking within the camp.

The Maghery man’s appeal for McGeeney to stay on is laced with heartfelt sincerity.

After the narrow defeat by Mayo the Armagh manager who has been at the helm for the past five years said he had “101 reasons”for walking away but would take time to consider his future.

“I would be absolutely gutted if Kieran decided to step away or if anything happened that Kieran wouldn’t be in place,” said Forker who has had a brilliant season.

“I feel we’re on a graph that’s on the upward curve and I feel that a lot of it is down to Kieran.”

Just when it appeared that McGeeney was beginning to make headway with Kildare having built a team that had everything bar luck, he was sacked by a single County Board vote which caused uproar among the players and large contingents of support that had every faith in him. Kildare haven’t exactly been setting the heather ablaze since his exit, in fact they have taken a massive downturn.

So are their lessons to be learned? Armagh need to be careful that they don’t fall into the same trap. Through time and patience McGeeney has built a panel capable of taking their commendable 2019 season a step further, perhaps Division 1 football next year plus a first Ulster Final appearance since 2008. Should he walk away at this juncture, just like Kildare, Armagh’s prospects could well take a nosedive.

Armagh is a passionate county, but apart from the naughties their success rate is nothing to write home about. We are a small county and tradition shows that it’s only every 20 years that a team can be built capable of striking for major honours. This year has proven that Armagh could be well down that road.

Unless it is something solely personal I can’t see McGeeney not remaining in charge.

Even before the championship began he had already received the backing of the Armagh County Board and though the county panel is now disbanded there is no indication that all will not return plus a number of exciting new young kids on the bock.

Geezer has certainly the full support of the players he has been working with in recent years and with the position relating to disgruntled fans starting to take a marked U-turn, everything seemed to spell out “McGeeney stays”!

An anonymous newspaper letter purporting to come from a former Armagh player has not gone down well within the county. Many GAA greats from other counties have also voiced their disgust. Kerry legend Kieran Donaghy said;”An absolute joke. Kieran has done an amazing job with this group, they were an inch away from beating a Mayo team full of class and experience. The forwards are flying and Armagh are on the rise. I presume this is a fella Geezer just didn’t fancy.”

And former Galway great Padraic Joyce commented: “It is the most ridiculous article I ever read.”