Armagh blow Cavan away in Breffni 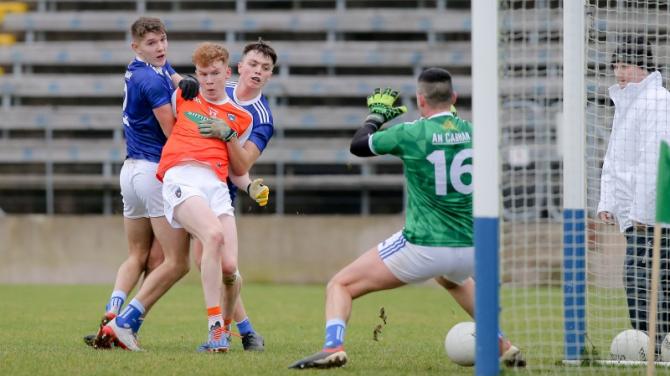 ARMAGH got their season off to the perfect start with a convincing victory away to Cavan on Sunday.

The game was as good as over early in the second half when the visitors opened up a 12 point lead.

Both counties paraded experimental sides with the Armagh debutants much more impressive, Clan Eireann’s Conor Turbitt in particular, who topped scored with 2-2.

His majors either side off the break left Armagh in a commanding position.

Rian O’Neill, who scored 0-6, was presented with the man of the match award.

Perhaps it is a trifle worrying that Armagh failed score for 30 minutes in the second half after Oisin O’Neill had kicked them into a 2-16 to 1-7 advantage. Yet the issue was never in doubt.

Armagh led by seven at the break and they won by seven, Cavan matching them on the scoreboard in the second period, 0-6 to 1-3.

It was a rare Armagh victory on Breffni soil and one which should inject confidence for the forthcoming national league fixture between the sides at the Athletic Grounds in January.

Five of the starting Armagh forwards got on the scoresheet which is encouraging.

With the game wrapped up Armagh manager Kieran McGeeney turned to his bench introducing a number of substitutes including Crossmaglen’s James Morgan who has been sidelined a lot through injury. There were also run outs for debutants Caolan McConville (Killeavy) and Mark Toal (Grange).

Both teams had purple patches in an entertaining opening half, Cavan hitting five points on the bounce to regain them the lead after Martin Reilly’s 10th minute penalty strike had slipped them narrowly ahead. But the visitors replied emphatically with seven scores without reply including Conor Turbitt’s first goal and with hindsight the job was completed.

It was very much a team effort though the contributions of the O’Neill brothers, Aidan Nugent and Conor Turbitt deserve special mention.

The defence performed steadily throughout keeping Cavan scoreless for significant periods in each half. The half-back line of Mark Shields, Gregory McCabe and Killeavy debutant Conor O’Neill constituted a strong line whilst behind them Brendan Donaghy and Aidan Forker put their vast experience to good use.

Armagh played with the wind in the first half and brought a very useful seven-point lead in with them at the interval.

McGeeney’s side’s made full use of the elements and kicked a succession of high-quality scores from long distance and tight angles. They kicked a wide from their very first attack and did not register another thereafter in an impressive first half performance..

Central to their victory was a full-forward Rian O’Neill who was in exceptional form. He opened the scoring with a 50-metre free before Cavan debutant Conor Smith, who was lively throughout, cancelled that one out with a left-footed snapshot.

Oisin O’Neill with a huge effort from the right wing and brother Rian (free) made it 0-3 to 0-1 before Cavan were thrown a lifeline.

Martin Reilly, who operated close to goal for the most part, gathered a Benjamin Kelly pass and played a superb ball to Stephen Smith, whose shot on goal was saved.

Monaghan referee Niall McKenna awarded Cavan a penalty which looked soft; Reilly stepped up and buried it in the bottom corner.

But Armagh responded positively with four in a row, Aidan Nugent (2), Rian O’ Neill and Jason Duffy to make it 0-7 to 1-1.

Cavan hit back with their best spell. A good score from Conor Madden, an excellent effort under pressure from Reilly , and an offensive mark well finished by Conor Smith and two more well taken points in quick succession from Madden and Bryan Magee, which saw the hosts move 1-6 to 0-7 in front on 22 minutes.

A classy point from Stefan Campbell got Armagh going again and they would dominate the remainder of the half. Oisin O’Neill booted over another point and then when a shot dropped short, debutant Conor Turbitt fielded well and slotted low under the Cavan keeper Ray Galligan.

Spectacular points from Aidan Forker, Rian O’Neill (2), Nugent and Turbitt saw the Orchard ease clear, with Ryan Connolly’s 44-metre free from the ground the sole response that the Breffni men could muster before the short whistle.

On the resumption Armagh immediately put the game to bed. Rian O’Neill slotted over a free after 50 seconds and then Campbell played in Turbitt who found the roof of the net with an unstoppable finish to make it 2-15 to 1-7.

From there on, the intensity dropped.The free-flowing football of the first half was replaced by scrappy and at times ill-tempered play and scores dried up for the most part,

Oisin O’Neill added another before the opposition opened their second half account in the 16th minute when sub Niall Murray hooked over on the run.

Murray quickly added another, a left-footed strike from 45 metres and then a free after a foul on Madden leaving it 2–16 to 1-10 with twelve minutes remaining -but shortly afterwards his impressive cameo came to an end when he picked up a second yellow card..

Martin Reilly won and converted an offensive mark before Conor Turbitt rounded off a good day’s work for himself with a well-taken point.

Deep in injury time, Cavan had the final say when sub Liam Buchanan, stationed at fully-forward, knocked over a point and then Madden sped through and slotted over off the left.

A good day at the office for manager McGeeney and a confidence building result fort his squad who play holders Tyrone on Wednesday week, January 8 at the Athletic Grounds (8pm).