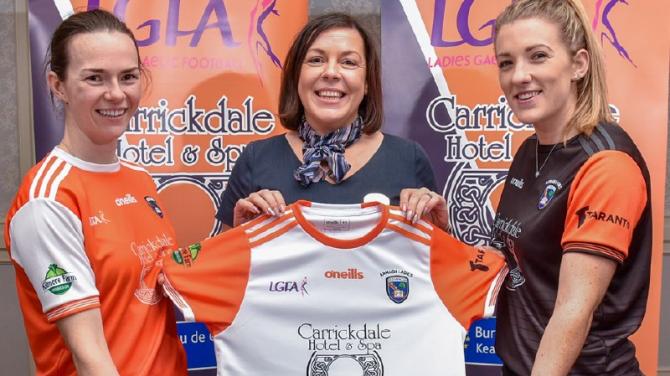 ARMAGH got Ronan Murphy's reign off to the best possible start as five goals set the Orchard outfit on course for an emphatic away win over Clare in Doonbeg on Sunday.

The hosts hit the last three scores of the match but by then Murphy's main focus was on giving girls game-time off the bench as he used eight subs in the final quarter.

Blaithin Mackin's second goal on 50 minutes was Murphy's cue to ring the changes with his side a fantastic 15 points clear of potentially dangerous opponents who had high hopes of taking a significant scalp.

This opening National League game of the season had looked like a tricky trip for the orangewomen, who just scraped a victory over Clare in Dromintee last March.

With the NFL's new straight final format, teams must finish in the table's top two this spring to be in the hunt for promotion to the top flight so ambitious Armagh had to hit the ground running.

Murphy hasn't the luxury of a honeymoon period even though Armagh have gone into this campaign without recently retired captain Caoimhe Morgan and their most prolific forward Aimee Mackin.

Over-reliance on double All Star Mackin, sidelined for the entire first phase of this season as she rehabs following major knee surgery, has been a past problem for Armagh.

However their four goals in a 10-minute purple patch in last summer's famous upset of Cork came with the elder Mackin having already left the field with a torn cruciate and, here too, others stepped up.

Clare had twice taken the lead early on with points sandwiching McCoy's fourth minute effort for Armagh but those two quick-fire goals settled any understandable nerves in the visiting ranks.

Full forward Niamh O'Dea, dangerous in the corresponding game last spring, struck back with a 14th minute major but captain Mallon raised two white flags in quick succession midway through the half.

However Armagh didn't score again in the opening period as a couple more points from the home team cut the Orchard side's interval lead to just two points.

It was a different story after the break though as Armagh hit a decisive 3-5 to just a paltry point from the Banner women in an impressive 20-minute period.

Niamh Marley got the first score early on with Mallon adding a goal and a point before Clare got off the mark for the second half, but their hopes of a comeback didn't last long.

The visitors scored 2-3 in a devastating spell starting with a Mackin point and then a goal from Catherine Marley, her first for Armagh.

The youngest of four siblings to follow their dad Noel as county footballers, Catherine had made a major impression against Cork and Mayo last summer after being given an overdue opportunity in the team.

She has the chance to nail down a starting spot this season and getting among the Armagh goals here can only boost the 23-year-old's confidence further.

Mallon brought her tally to 1-4 before her Armagh Harps club captain Fionnuala McKenna marked her return to inter-county football by becoming the Orchard's sixth scorer of the afternoon.

When Mackin netted again a minute later it put Armagh 15 ahead and, although like the opening period, there were no Orchard scores late in the second half, it didn't matter.

Having handed a surprise Orchard debut to one 17-year-old schoolgirl forward from Granemore, Corinna Doyle, Murphy replaced her with another, Edel Hagney, as his first substitution.

Ballyhegan's Grace Ferguson came on for Catherine Marley while Aveen Donaldson-Bellew, fresh from her honeymoon, replaced Tiarna Grimes alongside a scoreless Caroline O'Hanlon in midfield.

Megan McCann from Clann Eireann took over from McKenna and Ballyhegan's Eve Lavery replaced Megan Sheridan of Forkhill, with a further three changes happening in injury-time.

In a section containing Kerry and three Ulster Senior Championship rivals, there will be tougher tests ahead so the Orchard crew won't get carried away but this was a very encouraging first outing.

For various reasons, Armagh have lost six of what were their 18 core players from last season with Morgan joined in absence by former captain Maebh Moriarty, goalkeeper Caroline O'Hare, Niamh Coleman, Colleen McKenna and Rebecca O'Reilly.

There has been a significant influx of fresh faces over the winter and some of those newcomers will hopefully put their hands up for opportunities as the campaign progresses.

However, with Armagh needing to put their best foot forward from the off, Murphy's first starting line-up proved predictable with plenty of experienced players leading the charge.

Clann Eireann's Clodagh McCambridge dropped into Morgan's full back berth in front of Carrickcruppen goalkeeper Anna Carr, flanked by new vice-captain Sarah Marley and 2014 All Star Mairead Tennyson, returning from a year out ahead of her 36th birthday this Saturday.

As expected, Niamh Marley was deployed at centre half back with Sheridan and Grey either side of her and Grimes chosen as triple All Star O'Hanlon's midfield partner.

New skipper Mallon was joined by McKenna, back after taking a year off from Orchard duty to recharge her batteries, and McCoy in a very strong half forward line.

Donaldson might have featured there but instead the last spot went to exciting prospect Doyle alongside Blaithin Mackin and Catherine Marley up front.

Armagh had 30 players togged out on the afternoon even without their four Ulster Schools All Stars Brianna Mathers, Chloe Kelly, Angela Loughran and Ciara Garvey, who had been on interpro duty at Kinnegad the day before.

Converted Dromintee forward Nicole McKenna was Carr's goalkeeping cover in Doonbeg in Mathers and Doyle's absence while the other player yet to make an Armagh appearance was Killeavy's Eimear O'Brien.

Murphy's matchday squad on Sunday showed nine variations from that which ended last season under Lorraine McCaffrey and Fionnuala McAtamney, though Mathers will be back next time out.

Their replacements in the 30 for Doonbeg, where US President Donald Trump has a golf resort, were Tennyson, Fionnuala McKenna, Grey, Doyle, Hagney, Clarke, Nicole McKenna, O'Brien and Moya Feehan from Shane O'Neills.

Armagh now host their manager Murphy's native Tyrone, who will want to bounce back from a 2-14 to 2-6 opening day defeat away to newly-promoted Meath, at Silverbridge this Sunday before further trips to take on Kerry and Wexford.

Former Armagh manager James Daly's Cavan agonisingly lost 3-10 to 4-8 at home to Kerry in spite of a dramatic comeback while recently relegated Monaghan showed their intent by hammering Wexford 6-23 to 2-6 in their own backyard.