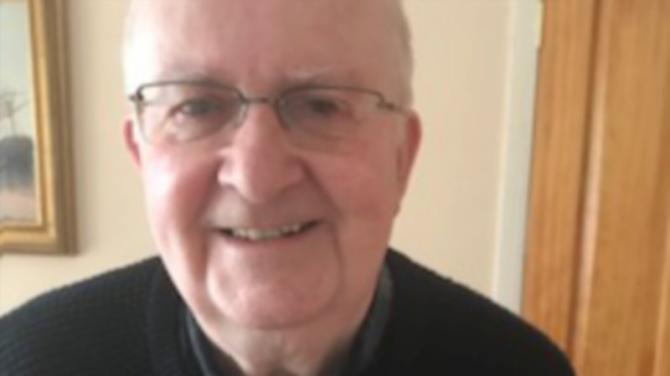 ARMAGH Harps stalwart Brendan McGurgan is to be awarded the prestigious Hall of Fame accolade.

His induction takes place as the city club stages its Senior Presentation Night this Saturday, February 29.

The event, to be held in the Harps Social Club, will see the Senior Reserve County champions receive their medals.

The special recognition will be a highlight of the night when the club recognises and pays tribute to Brendan, a man whose tireless work and dedication has been instrumental in bringing the Harps to where they are today.

The following citation reveals why Brendan McGurgan is a very worthy recipient of the 2020 Hall of Fame award:

“Brendan was born in 1946 in the townland of Lislea, moved to Milford where he spent his formative years to the mid ‘60s, then moved to the city outskirts at Legarhill in the early 1970s. At this stage Brendan was teaching in St Malachy’s Primary School in Chapel Lane, with some colleagues who would have a significant bearing on his future relationship with Harps; namely Phil McGinn (RIP) and Patsy Nugent, both of whom would go on to chair the club. Ironically both Brendan and his good friend Pasty transferred to the new St Patrick’s Primary School in the early 70s, literally a stone’s throw from Harps heartbeat, Abbey Park.

“Brendan and Patsy developed and promoted Gaelic football in the school and their commitment and dedication bore fruit when, in 1978, they were rewarded with the school winning the Mid-Armagh Primary Schools Championship, beating hot favourites C.B.S. Greenpark by a single point. The hard work, diligence and coaching offered by Brendan and his colleagues at school level was a welcome bonus for Harps. St Patrick’s Primary became, and still is to this day, a key feeder school for the club. Members of the successful St Patrick’s teams, including Brendan’s two sons Conor and Niall, progressed to Harps U12s and beyond.

“In 1982, Brendan was approached by a Harps great (Brendan’s description!) Phil McGinn - his teaching colleague from St Malachy’s Primary School - and asked if he would consider becoming involved in a coaching capacity with the Under 12s. Brendan readily volunteered and thus began his long and successful coaching, and soon to be administrative association, with Armagh Harps.

“Of course, when anyone volunteers, their worth is quickly assessed and their role rapidly expands. Managing the U12s swiftly developed into assisting from time to time with the U10s and U14s. Brendan fondly remembers these days and the assistance and indeed craic with his fellow coaches and helpers, the late Paddy Kelly, Joe Mackle, Pat McStravick and Bobby Gamble along with Pat McKenna, and his own brother Eamon. The highlight of those years was the U12s victory in the 1988 Mid Armagh championship final over a good Middletown side in Madden.

“Brendan’s interest in youth football continued and he was delighted when the club won the Feile na nOg in 1990 defeating Killeavy in a second replay by six points. The cup was presented to Harps captain, Brendan’s son Conor. The team then went on to represent Armagh in the All Ireland Feile na nOg finals in Galway. Brendan readily assisted with the fundraising effort which collected £1,150 to cover expenses. The boys played three games and gained valuable experience. On the Sunday Brendan proudly joined the team in the parade of participating clubs, through the streets of Galway to Pearse Stadium, where they were welcomed by various dignitaries including the then Mayor Michael D Higgins, now President of Ireland.

“Brendan warmly remembers the momentous years when the club's Senior team reached three county finals, winning two. He recounts the excitement and euphoria of ’89 - Harps’ first County title in 31 years - and recalls with pride the unforgettable celebrations in the Athletic Grounds coupled with the rejoicing in the Social Club that night. Ask him about the cavalcade! All of that was repeated in 1991 when Harps beat Maghery in the County final by the minimum margin. Brendan was a member of the video team for those finals along with commentator Paul Hart and cameraman, the late Oliver Toal.

“In addition to proving to be a more than capable underage coach, Brendan was an integral part of the Armagh community. He volunteered for parish duties and was a Credit Union Board Member. These attributes would only lead to one thing - Brendan was approached to consider becoming a Committee member. Ask a busy man! Being the gentleman he was, and relishing the opportunity to contribute to the welfare of his club, Brendan accepted and was elected to the Committee in 1985.

“Brendan witnessed and contributed to considerable change within the club during the ‘80s and ’90s and embraced the club’s transformation with a business-like management style.

“Brendan’s achievements are too numerous to mention but through his diligence and steadfastness and that of his Committee colleagues, the foundation stone for the future advancement of the club we enjoy today was laid. This progress made by Brendan and colleagues came about in the context of an extremely difficult environment - politically, economically and socially.

“While Brendan went on to hold the important positions of Assistant Secretary, Registrar, PRO and Youth Co-ordinator, no task was too big, or too menial, for him to devote his time and energies to. Brendan excelled as a PRO using every opportunity at his disposal to promote his beloved club. His production of the monthly newssheet, match reports to the local press, input into our superb club history, helping with our Centenary Exhibition and Celebratory Dinner Dance in 1988, and ensuring participation of our youth in St Patrick’s Day Parades, all contrived to increase the club’s popularity. Match day announcements in Abbey Park, annual Mass arrangements and match videos with Paul Hart as commentator kept him busy. He was an ever-present helper on the Lotto Committee and a regular member on our teams on the Quiz and Scor circuit, resulting in a number of successes.

“Brendan was also an able and willing fundraiser and a diligent member of the Abbey Park Finance Committee, meeting weekly for almost a decade in the 1990s. He was involved in the ‘Dressing Rooms Draw’ from 1992 to 1994, the ‘20/20 Draw’ and the ‘Ten Year Membership’ fundraiser, and knocked many doors to gain the financial support to provide us with the playing facilities we called home for over 20 years. He recalls fondly the construction of the changing rooms, the stand, the floodlighting and training pitch, and with a tear in his eye recounts many incidences when he witnessed the unstinting work and support of many committed club volunteers who are sadly no longer with us. Brendan reminisces about the special atmosphere in the packed Social Club as he introduced Jarlath Burns to make the various draws in the Grand Draw, a hugely successful night for the club.

“Brendan’s membership of the Harps Committee lasted approximately two decades and the legacy of his reign is evident today. He has played a key role in the development and success of the club over an extended period and to this day he is a supporter that the club can rely upon. He derived huge enjoyment from our Senior team’s success in winning the County championship title in 2017 and wishes all our Harps teams every success this year and the years ahead.”