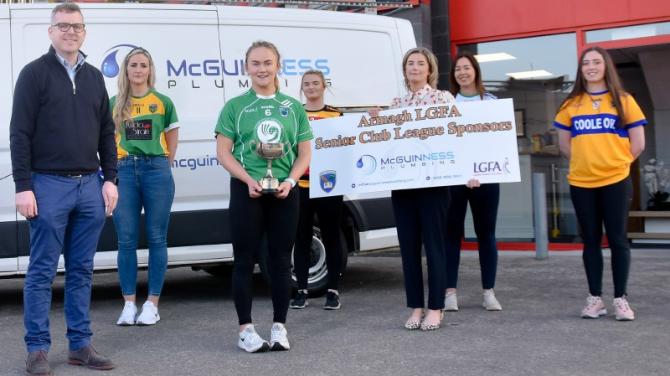 THERE is still no start date for the new domestic season in gaelic football but Newry firm McGuinness Plumbing have been unveiled as the new title sponsors of Armagh LGFA’s adult leagues, writes Richard Bullick.

The backing has been welcomed by Orchard Chairperson Sinead Reel, for whom this is another important piece in an impressive sponsorship jigsaw with commercial partners now in place for all the county teams and domestic competitions.

“We are in strange times and the support from businesses near and far has been overwhelming, especially in the current climate,” said Reel of a company which describes itself as a ‘leading mechanical contractor in Ireland’ and is involved in significant construction projects north and south.

“McGuinness Plumbing have a long history of supporting charities and various GAA teams. Most of our staff have some involvement with the GAA at various levels, with our Managing Director Thomas McGuinness being a keen Armagh supporter.

“So we are thrilled to be partnering with Armagh LGFA at this time. Ladies football in Armagh is currently at an outstanding level and we are delighted to help support club football,” said a company spokesperson.

Although 2020 was a condensed season due to the Covid-19 pandemic, it proved very competitive and extremely enjoyable, with Shane O’Neills emerging as Armagh league champions for the first time ever.

Crossmaglen secured a return to the top flight by winning the Division Two title, Ballyhegan emerged top of the pile in the third division and the amalgamated Craobh Ciaran team, representing the Derrynoose and Middletown clubs, won the basement section.

A new coronavirus surge in the second half of September saw the final few fixtures called off so it is understood that there will be no enforced relegation with an extra team simply added to the division above in each case.

There had been an intriguing three-way tussle at the bottom of Division One involving Grange, Silverbridge and newcomers Dromahill, a combined team representing Dromintee and Forkhill for the first time.

Outgoing league title holders Armagh Harps, whose main focus was on their ultimiately successful bid to secure the Senior Championship for the first time this century, won only two of the four fixtures they fulfilled before forfeiting their last two matches.

So the league honours were fought over by Lurgan giants Clann Eireann and Camlough neighbours Shane O’Neills and Carrickcruppen, with the head-to-head criteria ultimately proving crucial.

The away win for Shane O’Neills at Clann Eireann a few weeks earlier ensured Seamus McParland’s team took the title even though they had an inferior scoring difference to their rivals after the sides finished level on points.

Shanes claimed the top prize with a home victory in the Camlough derby against a Cruppen side which could also have finished level on points with Clann Eireann had they won that game and then their match in hand against Dromahill.

However, that wouldn’t have sufficed for Michael Heeney’s women as they had lost their opening game of the campaign against Clann Eireann in mid-July, the same evening Shanes suffered their only defeat away to Harps.

The league got great coverage last season, especially in this newspaper, and now McGuinness Plumbing can look forward to a high profile from being the competition’s title sponsors in 2021.

The new partnership with Armagh LGFA was launched last Tuesday night at the company’s premises on the Warrenpoint Road in Newry with a significant number of representatives from clubs in the south of the county in attendance.