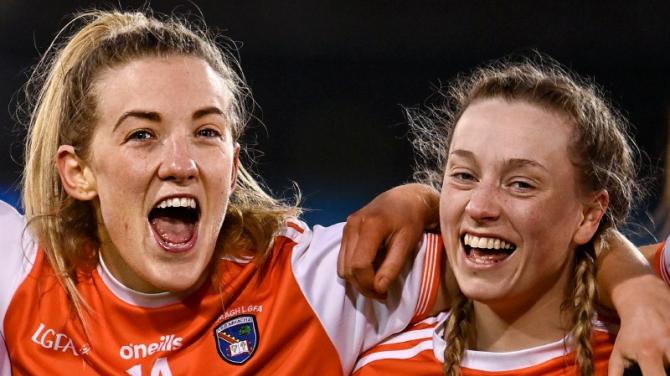 AHEAD of the county team’s return to collective training at the start of next week, Armagh ladies gaelic star Aoife McCoy is backing inspirational skipper Kelly Mallon to lead the orangewomen to All Ireland glory this year.

Dromintee dynamo McCoy believes fellow forward Mallon’s leadership on and off the field will be a significant factor as the Orchard outfit attempt to build upon last autumn’s encouraging campaign which culminated in Armagh being crowned Ulster champions.

“I think Kelly’s captaincy played a big part in our success last autumn and that she has brought us on a lot as a group. Having her as captain is a fantastic asset. She brings so much to the role and is incredibly committed to the team and all her players.

“Kelly is so supportive of the younger girls but, even as an experienced player, she’s someone who I really, really look up to. Overall, she’s a great role model and I’m very proud to play with her and have her as my captain,” enthuses respected senior pro Aoife.

Armagh reached the All Ireland semi-finals last autumn, where they put up a great fight before falling just short against a star-studded Dublin team who went on to make it four titles in a row, and McCoy insists the Orchard crew can make the big breakthrough this season.

McCoy, a hat-trick hero in the group game against Tyrone, and Mallon were denied first All Star nominations of their careers by the LGFA controversially scrapping the tradition, but they have their eyes firmly fixed on the sport’s top prize, the Brendan Martin Cup.

“Four All Irelands in a row is a massive achievement by Dublin, but I don’t think there’s a huge gap between them and a number of other teams, including ourselves, who have the talent and ambition to get to the top,” insists Aoife.

“We did well last autumn, and it was great to finish on a high with winning the Ulster Championship but I do think we could have gone a step further by beating Dublin in that semi-final.

“We got off to a slow start and were well behind after 10-15 minutes so were chasing the game. We got back level but then the sinbin hurt us. It’s hard enough against Dublin without having one player less!

“The match went the way it did on the day, but I think we showed we have the ability to beat them. If we’d taken more of our chances and a few decisions had gone our way, the outcome might have been different.

“It was a very competitive match, we fought hard and played good football like in the previous rounds and can take confidence from that. Dublin are a fantastic team and very professional outfit but, after last November, we certainly believe we can beat them.

“I think the potential of this team is massive, but up until now we haven’t been consistent enough so that’s something we definitely need to improve upon. We’ve beaten big teams, then gone and lost a game you’d expect us to win.

“We’ve got a lot of younger girls coming through and pushing for positions, we have other experienced players returning to the panel and there’s going to be fierce competition for places which will make everyone raise their game.

“Last year was Ronan Murphy’s first as manager and now we’ve a new coach (Shane McCormack from Kildare) coming in who will bring fresh ideas. Last autumn has given us a good base to build upon but there’s a lot to improve upon too. We’re far from perfect.

“We just need to keep the head down and work hard but have a confidence and belief that we can go that one step further. I absolutely believe this squad has the potential to win an All Ireland, so it’s up to us to do everything we can to achieve that,” she says.

Like everyone else, she is delighted at the prospect of returning to team training, which is permitted from next Monday for county sides in all gaelic codes, though the committed McCoy has done what she can on her own over recent months.

“I can’t wait for it to start up again. Training alone is something I’m still not used to, but you have to keep at it or you’ll pay the price later. For me, it’s probably been about discipline even more than motivation,” she told the Cork-based GAA Statsman podcast last week.

“In terms of lockdowns last year and now, I’m always striving to be better because everyone can improve. I’ve less travelling to do so can use the extra time to prepare meals better and get more sleep for example.

“All those small things can help contribute to performance so I’ve tried to use the lockdowns to better myself. You don’t always feel like it but just discipline yourself to do what you know is needed and doing your training also helps provide a bit of structure in strange times.”

Although the order of fixtures has yet to be announced, as Armagh get back together for the first time since Christmas, they at least have clarity regarding the first phase of the season following official confirmation last week of how the National League will work.

Each of the four divisions will be split into two sections of four teams on a geographical basis, meaning Armagh are set for three Ulster derby battles with Tyrone, Cavan and Monaghan on consecutive weekends from May 23.

Cross-over semi-finals will follow right away, with the winners meeting in divisional deciders a fortnight later on June 27 when whoever emerges from the all-Ulster group will likely end up taking on Kerry for a place in next season’s Division One.

Kerry, who had won all of their first five fixtures when last season’s NFL was abandoned because of the pandemic, should come through the southern section along with Meath at the expense of unfancied Clare and lowly Wexford.