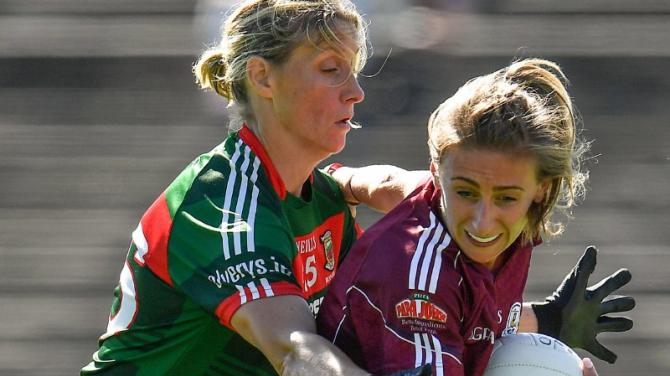 ARMAGH Harps star Sinead Burke has been paid a glowing tribute from her now former county team-mate Aine McDonagh after recently calling time on a fantastic 14-year career with Galway.

Speaking to The 42 website last week in her other capacity as a basketballer, McDonagh recalled with admiration how well double All Star defender Burke dealt with the most prolific forward in the history of ladies gaelic, Cora Staunton, in a provincial showpiece.

“The first year that I was on the panel, we played Mayo in the Connacht final. Sinead was marking Cora Staunton and obviously everyone knows how amazing Cora Staunton is, an absolute legend of our sport,” reflected McDonagh.

“From the second that I saw Sinead Burke play, I was in absolute awe of her. She’s still, to this day, the one person that I’m like ‘please do not come near me’ playing! She’s so good, and she goes unnoticed sometimes, the work that she does and the way that she plays. Ah, she’s an absolute joy to watch.

“I have to say I was very gutted to hear that Sinead was leaving. When I came in first (to the Galway panel), aged 18, she was so welcoming and always pulling me in, saying ‘if you ever need anything, just let me know’. She’d give me lifts to training and everything.

“I was really sad seeing her leave and, to be honest, someone has extremely big shoes to fill because she’s a real character. She really will be sorely missed on and off the field,” enthused an admiring McDonagh.