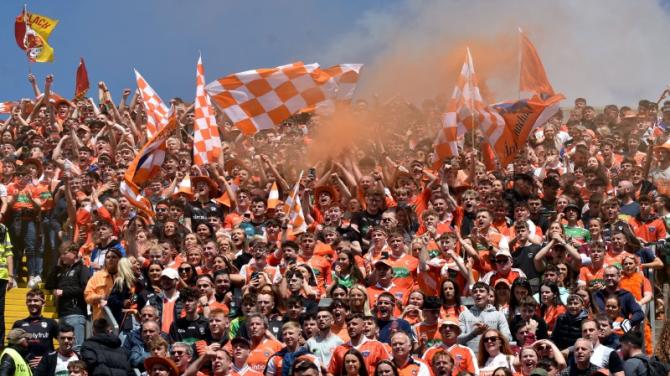 BEFORE Armagh kicked a ball this season most supporters would have settled for retention of Division 1 league status and a decent run in the championship and both achieved with a grand amount of aplomb.

The Croke Park championship All-Ireland quarter final exit on Sunday in a penalty shoot-out was heart-breaking made all the more gut-wrenching by the fact that Armagh had the winning of the game in the second half of extra time.

Galway looked home in the proverbial boat ahead by six points at the end of normal time but in the eight minutes of additional time never-say-die Armagh turned this sensational encounter around. Late goals from Aidan Nugent and Conor Turbitt and a superlative equalising free kicked by Rian O’ Neill forced extra time.

In the second period of extra-time Rory Grugan punched a goal to put Armagh two points up only for the Tribesmen to respond with their own three-pointer. With just a minute remaining substitute Jemar Hall had Armagh back in front only for Galway to draw level. And with the final piece of the action another Armagh substitute Niall Rowland had wonderful chance to win it but his effort went across the mouth of the goal and wide.

And so it was down to penalties. Stefan Campbell was first up for Armagh and missed. Whilst Rian O’Neill was on target, Conor Turbitt’s effort hit the post and that was that Galway going on to win 4-1.

It was the first penalty shot out in a SFC game in Croke Park and a most unsatisfactory conclusion with neither side deserving to lose after such a pulsating epic, by far the best championship game this season.

After a surprisingly tame showing against Donegal in the first round of the Ulster championship supporters’ confidence dropped dramatically.

Armagh management and players had six weeks before the Qualifers to figure out what exactly went wrong. It was time well spent. Defeating All-Ireland champions Tyrone and classically avenging that earlier championship defeat by Donegal had the entire county buzzing again with football fever.

Excitement reached euphoric levels when Armagh drew Galway in the quarter-final avoiding the big guns Kerry and Dublin. And with the winners of Derry and Clare providing the opposition at the semi-final stage the Orchard faithful viewed this as the best opportunity for the county to reach its first All-Ireland since 2003. The county became awash with colour. The good old days of the naughties were being reinvented.

Armagh supporters travelled to Croke Park in their thousands in the belief that this could be their year. And with just 15 minutes gone, their team were in cruise control ahead 0-4 to 0-1. As Armagh seemed to slacken off the pace the Connacht champions were able to get a grip on proceedings to draw level at the break. They kept their new found momentum going and opened up a four point lead. Armagh had it back to two when their centre back Greg McCabe was harshly red-carded. Galway capitalise on this and built up a winning lead or so it seemed. Looking every inch a beaten docket Armagh rallied incredibly to force extra time.

The penalty shoot out proved disastrous. With hindsight perhaps Rian O’Neill should have stepped up to take the first one. Stefan Campbell who was limping badly at the end of extra time didn’t look confident.

The fact that Armagh reached this stage of the competition without injured players Oisin O’Neill, Tiernan Kelly, the Mackin brothers Connaire and Ciaran and Niall Grimley was an achievement in itself. It was great to see the Mackin’s back in action again, both introduced as replacements in Sunday’s rip-roaring encounter.

Had Armagh pulled it off it they would have booked an All-Ireland semi-final spot for the first time in 17 years. As it stands they have yet to beat Galway in the championship, having now lost all four encounters.

Armagh took a gamble by replacing regular goalkeeper Blaine Hughes with experienced outfield player Ethan Rafferty towards the end of the year. The Grange man became a dominant figure and a most colourful one at that. He was very much central to the team’s resurgence with his imposing figure within his own parallelogram and daring outfield excursions, taking and setting up scores. He had absolutely no chance with any of the penalties which were all clinically dispatched. Apart from a few this is a very young Armagh panel so perhaps the best has yet to come. From Division 3, manager Kieran McGeeney has turned them into one of the top teams in the country. Armagh fans whilst disappointed with the manner of Sunday’s defeat came about will keenly await the arrival of the 2023 season. There is obviously still work to be done but things are surely heading in the right direction. Armagh can certainly look back on a blossoming season.