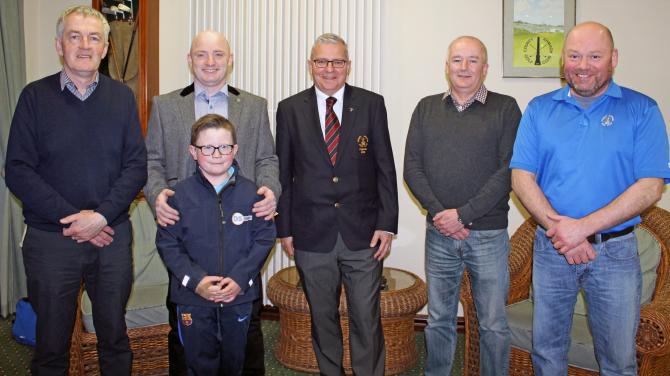 THE persistent rainfall – which carried on from where the preceding week's hefty snowfall left off – didn't exactly hint at the arrival of spring-like conditions at County Armagh Golf Club.

Nevertheless, both the reintroduction of an 18-hole course and the sight of a sponsor's name on the weekend fixture list did at least indicate that the start of the full competitive season isn't too far away.

The Four-Ball Eclectic on Saturday 10 March was kindly supported by DS Refrigeration Ltd and saw one particularly deadly quartet keep their cool to leave their rivals feeling the chill.

Jonathan McKnight, Derick Hynes, Stephen Catterall and David Leeman have been no strangers to individual awards in recent years.

Here, they pooled their not insignificant resources to form a potent unit that took the honours by virtue of a substantial haul of 54 points.

Meanwhile, the tricky trio of Gary McAleavey, Gerry Doyle and Brendan Lynch made light of their one-man disadvantage to record the same 52-point total and take up occupancy in the bronze-medal position.

A full 24 hours was probably needed just to dry out and boost spirits, but County Armagh's doughty competitors were ready to do battle again in a Club Stableford event on 11 March.

Emerging triumphant from said Sunday duel was Paddy Darragh, who turned in a magnificent 43-point performance to earn victory by four clear strokes and signify that his game's in rude health going into the 2018 campaign.

In Darragh's wake, a plethora of players posted 39 points and were separated on breaks of tie.

Heading up this posse was that man Stephen Catterall, doing the damage once more to secure second position overall.

And all three categories were also won on that score, with Ryan McVeigh, Desmond Kinsella and Philip Devlin each coming out on top in their respective handicap brackets.