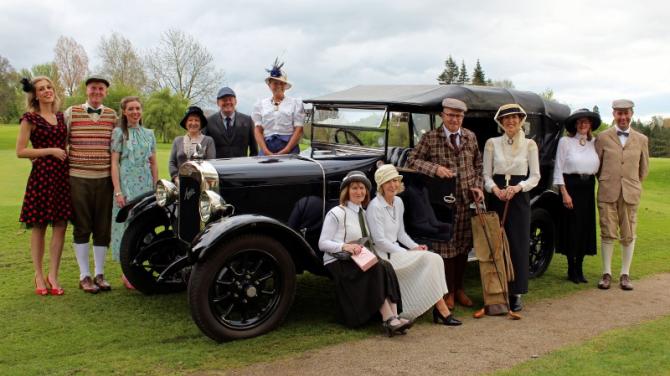 SET in the magnificent Georgian palace demesne of Archbishop Robinson and featuring panoramic views of the historic Armagh city and its surrounding countryside, County Armagh Golf Club is one of the most picturesque golfing locations in Ireland.

County Armagh Golf Club celebrates its 125th anniversary in 2018, and it promises to be a memorable 12 months for a club that combines a colourful history with a great love of the game and an admirable community spirit.

With almost 800 members across all categories, County Armagh is very much a 21st century golf club.

However, the club is also one of the oldest in Ireland, having been formed in 1893 under the auspices of the Armagh Archery and Lawn Tennis Club. In that year, it was generously granted use of the demesne land, rent free, by Mr George de la Prev. Beresford.

When the ground, which spans some 350 acres, was sold in 1916 to the Diocesan Council for a very reasonable sum, the club was granted an annual tenancy at a nominal rental rate.

The late 50s onwards then marked the most progressive period in the story of the club. This can be attributed largely to the vision and leadership of two men, namely PG Toner and JE Maxwell. They had seen the pace of golf’s development and realised that, if County Armagh wished to take its place among the championship courses of the country, it must move with the times.

A feasibility study to acquire space for an 18-hole course was undertaken, with Ballyards, the Race Course and Castledillon Estate all considered. Eventually, due to the sympathetic support of Archdeacon the Rev JRM Crooks representing the Diocesan Trustees, additional land was acquired in the demesne to extend the course from nine to 18 holes, with security of tenure granted by a 40-year lease.

The design of the new 18 holes was entrusted to Don Patterson, the then professional at Warrenpoint, and Alan Smith, a course architect. Towards the end of 1972, the contract for building the course was awarded to JG Duff and Co for £26,000. A further £12,000 was later added to bring an automatic water-sprinkling system to the furthest reaches of the course.

A blessing of the course by Archdeacon Crooks and the Administrator of the Catholic Cathedral, the Rev Malachy Coyle, preceded the first drive. Club Captain Harold O’Rourke then addressed the assembled crowd before taking on the most intimidating golf shot of his life. The spot where his ball landed is now marked with a granite plinth to commemorate the occasion.

Partnering Harold on the first tee were Vice Captain Michael Lyons and, fittingly, the aforementioned Pat Toner and Jim Maxwell. Also writing their names into the club’s history books that day were Charles Vernon Snr and Eithne O’Hare, winners of the inaugural 18-hole competitions.

Since that momentous opening, landscaping has matured the course, major alterations have taken place, and further improvements have been made to many greens and tees.

Today, County Armagh Golf course is widely considered as one of the best parkland courses in the country, with every hole comprising a different layout that requires a variety of shots to challenge and delight every golfer, whatever their handicap. It provides an intriguing test of skill, as has been evidenced when the club has hosted major amateur and professional golf championships.

For Club Captain, Colm Shannon, 2018 is a particularly special year.

“It is a massive honour to be the club's Captain in the year that we celebrate our 125th anniversary,” he commented.

“I first joined back in the early 70s when I was 11 or 12 years old and this was a 9-hole course. It was a great club then and, thanks to the efforts of the members and Captains over the years, both men and women, it is still a great club.”

Outlining aspects of club life that will be of particular significance in 2018, Colm highlighted the commencement of some course improvements under the committed stewardship of Greens Convenor, Davy Baird. This includes work on the 16th green and plans for improved course drainage. The clubhouse bar area is also to receive a major facelift, with refurbishment scheduled for the autumn.

“County Armagh Golf Club can look forward to a brilliant 2018, as it marks its 125th anniversary,” added Colm.

“The gala ball in the Armagh City Hotel on Saturday 27 October will be an especially exciting climax. It will be an opportunity for members and businesses that have supported the club over the years to join us in celebration. I look forward to seeing many old faces at this event and, indeed, I extend an invitation to all past members, friends and family to visit County Armagh Golf Club at any time.”

With ladies membership topping 130 and juvenile membership on the increase, the club has a huge social footprint in the city and indeed further afield. But the quest for new members is very much taking place in the locality.

“We aim to be the best club in the county”, says Captain Colm. “That is the goal, not just in terms of our teams but from the point of view of the social life of the club and the legacy of the many fine people who have represented us over the years.”

Admittedly the lack of success of County Armagh Golf Club teams has been noticeable in recent years, although winning the Jack Craig Memorial Foursomes in 2017 has stirred a new enthusiasm for silverware.

It was 2010 that County Armagh had last secured a ‘major’ — the Ulster Four-Ball Trophy. And before that, it was 2016, when the juveniles lifted the Ronan Rafferty Cup.

County Armagh’s ladies, meanwhile, have enjoyed various triumphs over the years. In 2016, the ladies’ Minor Cup and Challenge Cup teams were crowned Ulster champions, with the Minor Cup team going on to be runners-up in the All-Ireland Final. Other notable victories at Ulster level in recent years include the Junior Cup and Junior Foursomes in 2013 and the Challenge Cup, which has been won three times since 2012.

The junior girls have also brought prestige to the club, winning the Ulster U19 matchplay championships in 2005 and 2007 and becoming All-Ireland winners in 2006. They were also Ulster winners in Foursomes competitions in 2004 and 2005.

However, we have to look back to the 1920s for international glory, with the first Lady Captain, Miss Maisie Hirsch, winning the Ladies’ Swiss Open in 1923 and 1927.

In 2018, the ladies will be once again field eight teams that will play with their usual determination and skill.

“We hope to perform well in this significant year for the club,” said Lady Captain Elizabeth Mawhinney. “But win or lose, we know that our teams will earn the respect of their opponents for their sporting attitude and friendly approach.”

Reflecting on the 125th anniversary, Elizabeth added: “Women have played an important and meaningful role in County Armagh Golf Club for many years. Our Ladies’ Branch is widely renowned as vibrant and welcoming. Golf on the fairways is taken seriously, but enjoyment and the fostering of good relationships and lifelong friendships are just as vital.

“Proof of this can be seen at our social events and very popular ladies’ outings, which have taken us all over Ireland and even as far as the home of golf at St Andrews.”

Elizabeth continued, “Last year, we increased our numbers through the Get Into Golf initiative, and we are keen to encourage more new ladies and junior girls to join us.

“This year, along with our usual fixtures, we are looking forward to participating in some very special celebratory events.

“We are also approaching a period of change as the Golfing Union of Ireland and the Irish Ladies Golf Union each consider dissolving and establishing one governing body for golf in Ireland.

“County Armagh Golf Club is an inclusive club where all members feel valued, so we are confident that we can retain what is good, tried, tested and traditional from the last 125 years, whilst embracing new opportunities.

“By working together to promote and enhance the club, we can ensure that we safeguard it for generations to come.

“It is a case of building on the past as we prepare for the future. That way, our prestigious and historic club will remain relevant and innovative for the next 125 years!”