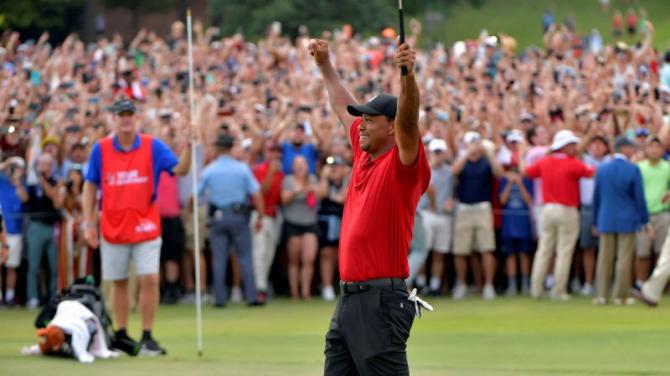 PORTRUSH and the north coast is set for a major financial windfall - thanks to Tiger Woods' first tournament victory in over five years at the weekend.

That's according to one of those charged with overseeing next summer's return of The Open Championship to Royal Portrush.

John Bamber, Chairman of the Royal Portrush Golf Club Open Championship Organising Committee, describes the 42-year-old 14 times major champion as a 'one man economy' who has the potential to elevate July's tournament to new heights.

“It's well known the impact Tiger has on the US economy where it's reported his influence is worth as much as $1bn,” said John.

“The statistics are staggering when Tiger plays well: fans buy more tickets, bigger numbers watch on television - which drives up advertising revenue - while people stay longer in bars to watch.

“His return to the top of the sport couldn't come at a better time for us, ten months out from The Open Championship.

“Tiger has continually improved over the course of the year. The way he's playing now - and the way he saw off the field to win the Tour Championship in Atlanta – will make him one of the favourites to add to his majors at Royal Portrush.

“The interest, not only in the golf club but in the whole of Northern Ireland, will be vastly increased because of his latest victory,” he added.

“His return to winning ways means everything. It wasn't that long ago we were hoping he might compete; now he's among the leading contenders.”

Woods' win has been hailed as one of the greatest sporting comebacks of all time, overcoming personal demons and injury problems to enhance his reputation as a sporting icon.

He was swamped by delirious fans on the 18th green, sparking unprecedented scenes and underlining his importance to the game.

“I keep thinking that we've had all our good fortune in the past ten years but I just don't know, it's like the gift that just keeps on giving,” continued John.

“At the start of this year the hopes were that he might come here and maybe make the cut. Now he’s a very real contender.

“It makes for an interesting Open Championship and I can’t wait for Tiger to be announced on that first tee next July.”