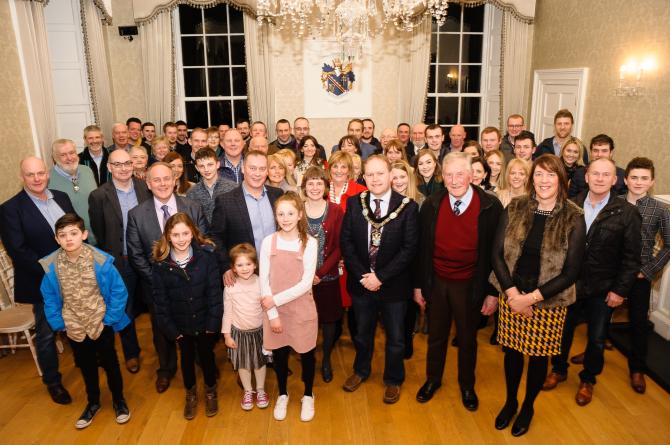 Lord Mayor Gareth Wilson and Lady Mayoress Allison Wilson pictured along with Alderman Freda Donnelly and the organisers of the annual Livingstone Tractor Run which raised £53,000 on December 31

THIS year’s Livingstone Tractor Run has raised an incredible £53,000.

The annual event which took place on Saturday December 31 attracted over 850 tractors from all over the country with the proceeds going to the Northern Ireland Children’s Hospice and the Southern Area Hospice.

Last week Lord Mayor of Armagh City, Banbridge & Craigavon Borough Council DUP Alderman Gareth Wilson has hosted the Livingstone Tractor Run organisers at the Palace to recognise the tremendous achievements of the group in raising thousands of pounds for charity.

“The Livingstone family and scores of helpers organise the run each year and this year's event raised in excess of £53,000 attracting over 850 tractors. Fund raising was also greatly helped with the generous sponsorship of local man Ben Sergeant who also attended the special reception,” said Mr Wilson.

“I just wanted to convey on behalf of the people of the Borough our heartfelt thanks for all that the Livingstone family and their hard working team do each year in organising this massive event and raising so much for two excellent charities."

He added, "Alderman Freda Donnelly suggested to me that I host the team and I was only too happy to get the wheels in motion and welcome this amazing group of people to the Palace. As I said in my remarks on the night, no family or individual knows when they may need the services of either the Children's Hospice or the Southern Area Hospice.

“The totals raised over the years by the Tractor Run due the generosity of the public, is testament to the work of these two charities and it is another example of the great spirit of giving that exists in this Borough."

He concluded, "I want to congratulate the Livingstone Family and their team and wish them every best wish as they look towards the 2018 event and I know that once again the farming community will come out in force to support this most worthy of endeavours."