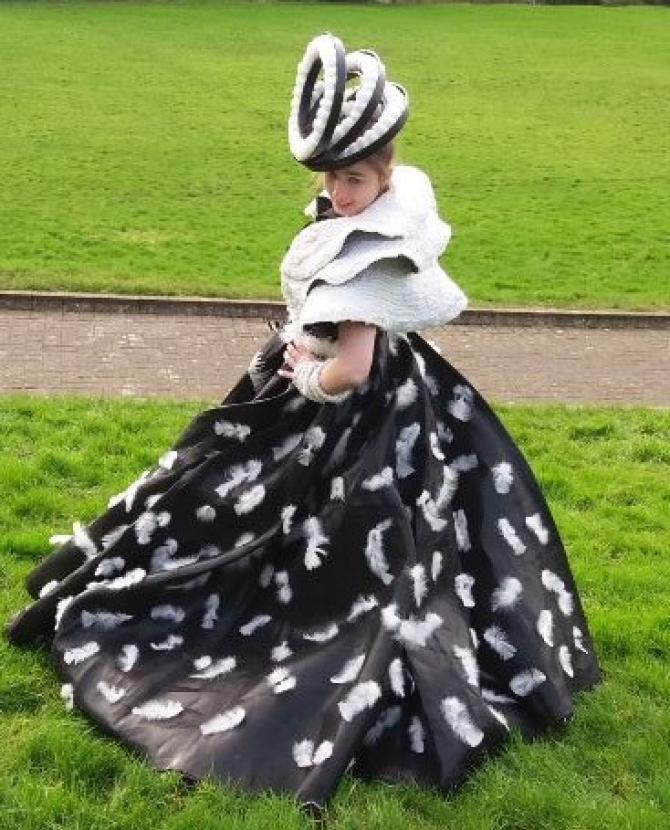 Rachel in her dress, Serenity

AN Armagh student has used her precious memories of her late brother to design and make a dress which has won her a place in the final of an all-Ireland competition.

City of Armagh High School pupil, Rachel Irwin has made it to the final of Junk Kouture for the third year in a row and her dress has been inspired by the memory of her brother John who died almost two years ago.

Designing and making the dress has taken five months of solid work but for Rachel it was also time she used to feel close to John which has helped her in the grieving process.

“A lot of the design has been inspired by John,” said Rachel. “When I was entering my first Junk Kouture competition he was so supportive with suggestions like using turkey feathers and used fertilier bags.

“My first dress was called Wind Beneath my Wings and I used John’s suggestion of the turkey feathers and then last year my dress was called Farmyard Fashion when I used the fertiler bags to sew into a dress.

“This year’s dress encorporates three Christmas wreaths from John’s grave as the head-piece, a 13ft trampoline mat as John loved to use our trampoline at home and of course some turkey feathers.

“There is also a Robin embrodiered into the dress as there is a saying that whenever a Robin appears lost loved ones are near.

“The dress also has a number of layers and this is to signify the different layers of grief.

“Designing and making the dress has taken five months but during that time I was able to think about John and it also helped me take my mind off other things. It was a therapeutic process and let me express my grief in an artistic way.”

Rachel’s proud mum, Diane says when she first saw her daughter wearing the dress she was moved to tears.

“When Rachel was practising for the regional finals I was in tears,” said Diane. “Knowing the work which has gone into making the dress and knowing the meaning of a lot of the different elements evokes very strong feelings for me.”

Voting has now opened for this year’s Junk Kouture final and Rachel is calling on local people to get behind her. Vote for

The final of Junk Kouture will take place at Dublin’s 3Arena on April 19.