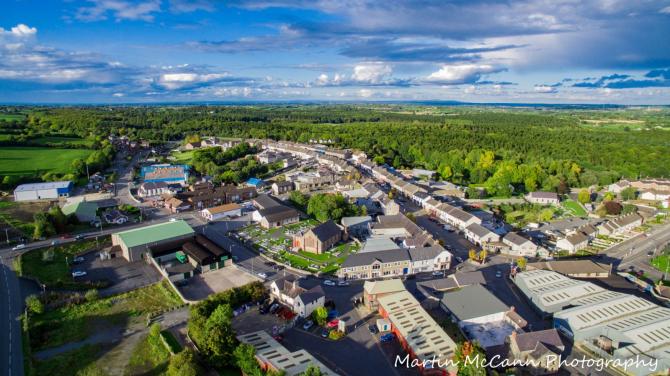 Aerial picture of Markethill and Gosford Forest Park. The park is set for a major redevelopment. Picture courtesy of Martin McCann Photography

COUNCIL plans to transform Gosford Forest Park in Markethill into a five-star family-focussed holiday destination were revealed this week.

The £5 million plan came before Monday night’s meeting of ABC Council’s Leisure and Community Services Committee and includes the development of a state-of-the-art visitor centre at a cost of £2.1 million.

Notably there is no provision for a reduction in the current car-parking charge of £5 for each car or £50 for the annual pass. Work will also begin soon at addressing the issue of motorists parking on the hard shoulder outside the main gates to the park.
In April 2016 Outdoor Recreation NI were employed by the council to draw-up a masterplan for the redevelopment of the park.

In total ORNI shortlisted 17 options for full assessment, one of which was the development of log cabins for tourists although this option did not make the preferred final plan. ORNI also employed Cogent Management Consulting to complete an economic appraisal of the preferred option – this was carried out in November 2017.

The preferred option makes no provision for the development of the current facilities in the park’s camping areas, however experts believe that the additional attractions will significantly boost visitor numbers to Gosford which in turn will bring an economic boost to the area. Last year there were 7,574 camping and caravanning visits to Gosford.

Once the development has been completed and is up-and-running it is envisaged that it will bring in over a quarter of a million pounds annually. This figure is obviously just an estimate and will depend significantly on parking revenues and visitor numbers.

In terms of visitors Gosford usually attracts around 62,000 people per year. It is hoped the redevelopment will boost that figure by over 93,000 additional visitors. Council chiefs want to attract almost 20,000 out-of-state visitors per year which will contribute around £309,000 to the local economy. Currently there are around 38,000 visitors making the trip from outside the council area each year to Gosford and it is hoped this figure can be boosted by an additional 56,000 people which would in turn give the local economy a boost of £890,000.

The plans will cost the council a total of £5,146,433 with the council expected to pay £4,218.357. The remaining balance will come from outside funders and applications are understood to be at an advanced stage.

Speaking last year when an initial wish-list of possible attractions were being looked at Alderman Jim Speers described Gosford as a potential jewel in the crown for the council’s tourism offering.

A driving force behind the redevelopment plans Mr Speers said Gosford has the potential to attract huge amounts of visitors from Northern Ireland, the Republic and further afield. “It’s an exciting time for Gosford, the park is already a fabulous attraction which will only get better,” he said last year.

The plans were presented to the committee on Monday with members urged to endorse the funding package of £4.218,357. However at the time of going to press it’s unclear if councillors voted in favour of adopting these preferred options. Update in next week’s Gazette.