Our hearts are broken 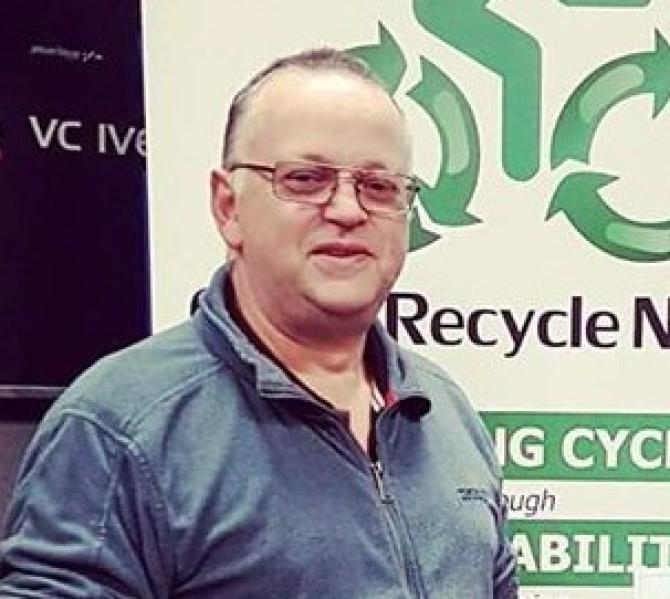 THE wife of a Tandragee cyclist who was found dead close to his home two weeks ago is urging people, especially men, to have their health checked.
Wendy Helliwell says she doesn’t want any other family to go through the same grief and pain as they are.
A post-morten revealed that David Helliwell (55) died of an undiagnosed heart complaint, which has very few symptoms but can apparently be identified by a blood test.
Mr Helliwell, a father-of-three, was found on the Drumnamether Road on May 31 around 7.30pm after going out for a cycle.
It was inititally unclear if he had been involved in an accident and police, along with Mrs Helliwell, had made appeals for information.
The couple had been due to celebrate their 25th wedding anniversary next month and had plans to renew their vows.
A keen cyclist, Mr Helliwell worked at  the Meadows in Richhill, caring for people with learning difficulties, and cycled to work every day, a round trip of 12-13 miles.

Said Mrs Helliwell: “He was a typical 55-year-old man – spreading in the waistline, losing his hair, slowing down a tad – but he would regularly cycle 20 to 30 miles at a time.
“There were no symptoms that he was unwell. He had been a little tired in recent weeks but it had been hot and we just put it down to that and the normal tiredness you get from working. He wasn’t breathless or anything like that.”
Mrs Helliwell said that on the evening of his death her husband had not long left their house on the Markethill Road when she heard sirens in the distance. “We were out in the garden … and we watched the direction they were going in. We weren’t worried, we carried on with what we were doing.
“When I got out of the shower there were two police officers there to tell me that David was dead.
“I have a 20-year-old son, an 18-year-old son and a 16-year-old daughter and they are devastated. It breaks my heart.”
She added, “I would say to men to attend a Well Man clinic, the way we women go the Well Woman clinic. Don’t be proud, just go.”
She said her husband rarely went to the doctor, the last time being about five years ago.
Mrs Helliwell praised the police for the way in which they handled the tragedy and kept her informed, describing them as “brilliant”.
She said she had also taken comfort from the love and support shown to the family. “I couldn’t ask for better friends and neighbours. I have a stack of cards, some from people we met 10 or 20 years ago and remembered us,” she said.
“My brother-in-law flew in for the funeral and he was really struck by the feeling of community..
“People were also very generous with donations in lieu of flowers and I have two nice amounts to give to each of the organisations.”
The groups to benefit are Cycle Recycle, Newry, and NI Chest, Heart and Stroke Association.
Mr Helliwell was a volunteer with Cycle Recycle, which encourages people to cycle by making it affordable, and became very good friends with Gerard Hughes, who runs the group.
On the group’s Facebook page, Gerard wrote: “Dave you are a total gentleman and I will miss the craic we had and our sneaky frys (that Wendy wasn't allowed to know about). You will be forever in my thoughts and prayers.”
Mrs Helliwell said she would be donating her husband’s bikes, and others he was doing up, to Cycle Recycle.
Mr Helliwell, who was originally from Derby, had lived in Tandragee with his family for the past 21 years.
The funeral service was held last Wednesday at the family home. In the eulogy, which Mrs Helliwell wrote and delivered, she recalled her husband as a terrific family man and a “country man” who loved the outdoors and fishing.
She recalled how, when the children were growing up, they would all go camping and cook sausages on the riverbank, and he would often encourage her “not to be grown-up all the time”.
“He was spiritual and believed the whole world was God...He was also a great man for funny one-liners,” she said.
Presbyterian minister the Rev Nigel Reid conducted the remainder of the service and cremation took place in Cavan where Mr Helliwell’s brother-in-law performed the committal.
Mr Helliwell is survived by his wife, children Michael, Tom and Katie, mum Brenda, stepdad Ray and family circle.