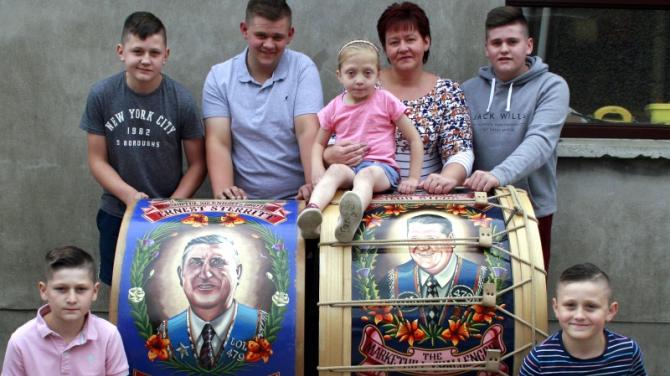 A MARKETHILL widow was in court on Friday to appeal an order by Armagh City, Banbridge and Craigavon Borough Council which restricts when and for how long her sons can play their beloved Lambeg drums.

On August 7 Kelley Sterritt received notice from the council demanding that the playing of Lambeg drums be restricted at her Forest View home to just one hour per week. The council also set out the days and times when it would be acceptable for her sons to play.

A barrister acting on behalf of the council told Armagh Court on Friday that the matter had arisen after the local authority had received a complaint about the noise of the drums from a neighbour of the Sterritt family.

The case has been adjourned until next month in order for the council to provide Mrs Sterritt’s legal team with their evidence in the matter. At that stage a date could be fixed for a full hearing. However, on Friday District Judge Paul Copeland urged both sides to work to find a “non contentious resolution” to the matter.

Mrs Sterritt’s solicitor Lewis Singleton told the court that Lambeg drumming and the making and preparing of Lambeg drums had taken place at the Sterritt family home for over 60 years. The tradition stretches back for three generations with Mrs Sterritt’s sons being introduced to the drumming culture by their late father Richard who passed away in 2016.

Mr Singleton said there has been no change in recent times to the amount or intensity of drumming at the Sterritt home and questioned what has changed for the council to bring about this application. He also stressed to the court that Mrs Sterritt was willing to work towards an accommodation in the matter.

Now the appeal has been lodged the Sterritt family is free to play Lambeg drums at times of their choosing until a final outcome in the case has been decided.

Speaking to the Ulster Gazette last month Mrs Sterritt said: “My husband Richard died in 2016 and while he was alive there was never a word said but since his death the council has now tried to prevent my sons from playing. Richard taught the boys how to play the drums and it is something very important to them to keep his memory alive.”