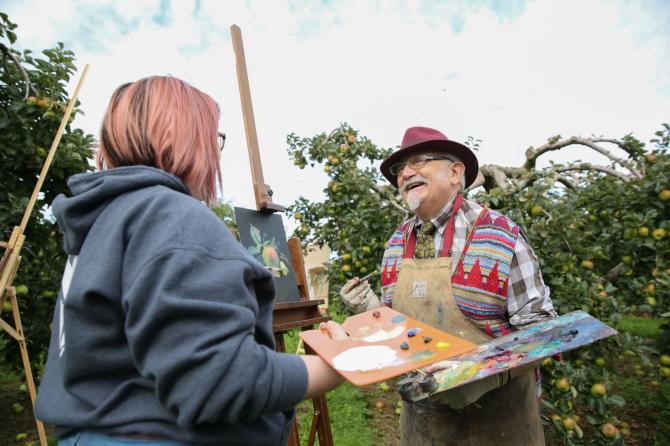 Armagh once again confirmed its position as the epicentre of epicurean delights in Northern Ireland as thousands of foodies, families, film fans, foragers and more enjoyed the fourth annual Food & Cider Festival this weekend.

An unrivalled four-days of sell-out events showcased the world class provenance and quality of local produce at 20 different venues across Armagh city and the surrounding orchard countryside.

Recently voted the fourth top Foodie Destination in Ireland by the Restaurants Association of Ireland, and the only Northern Ireland representation in the Top Five, the undisputed Food Heartland put on a fantastic show, welcoming food lovers from far and wide.

“This borough has so much to offer when it comes to world-class local food and drink products, access to learning about them, events to celebrate them and chefs who know how to do them justice.

“Our Food & Cider Festival is a perfect example of how the leading chefs and artisan food producers from across the area are coming together to provide an exciting private and public-sector collaboration which continues to attract local, national and international media and visitor interest.”

The biggest yet, the 2018 Festival welcomed visitors from across Ireland, the UK, Europe and beyond to enjoy truly unforgettable occasions in stunning venues including a 17th century meeting house or luxury tepees at the 18th century Crannagael in Ardress.

Nearly a dozen of the leading chefs and restaurants from across the borough brought their creativity and culinary skills to the Festival schedule to create mouth-watering menus, including 4 Vicars’, Uluru and the Armagh City Hotel, Groucho’s of Richhill, Quail’s at the FE McWilliam Gallery and the Yellow Door Deli of Portadown.

The delights of Northern Ireland’s Food Heartland were enjoyed as both Banbridge and Armagh city hosted artisan food markets which were huge successes, with local restaurants serving delicious street food at Solitude Park and the Shambles Yard as the crowds enjoyed live local entertainment.