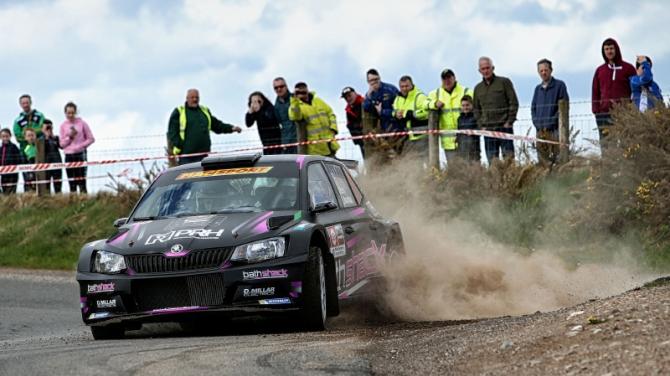 DESI Henry reckons a strong result in Donegal this weekend can reignite his bid to lift the Irish Tarmac title.

The Skoda Fabia R5 driver bounced back from the disappointment of retiring on April’s Easter Stages Rally with a solid performance in West Cork before finishing the Rally of the Lakes in Killarney with Liam Moynihan on the podium.

Those results moved Henry up to fifth in the Championship standings with one dropped score already played. Those above him have yet to lose points through a non-finish.

“If we can get first or second place points in Donegal it will definitely bring us back into the running again,” he said.

“It’s hard to go through an entire season made up of six long rallies without some bad luck. Hopefully our’s is behind us now and we can push on.

“I haven’t been to Donegal in maybe nine or ten years but I’m really looking forward to the challenge.

“We go there in good shape after our performances in Killarney and our win on the Tour of the Sperrins. We could maybe have done with another rally in the run up to Donegal but we will aim to hold a test instead. We won’t change anything on the car, just shake it down.”

Compared to many R5 drivers in the Irish Tarmac Championship, Henry’s knowledge of the stages is limited. However, he says changes to this year’s route coupled with detailed pace notes should allow him to narrow the gap to the likes of Robert Barrable, Jonny Greer, Sam and Josh Moffett.

“People said to me the Sperrins Rally was my home event - but I never drove those stages before,” he said. “I put my pace down to the notes and being able to put my trust in them.

“That is where we are quite strong and it allows us to adapt quickly. Other crews will have more experience having done Donegal a few times already but there are areas where we are stronger, so I am sure we won’t be too far away if we look after the car and keep our focus.

“At three days and three hundred kilometres it’s a long, hard rally,” added Henry, “but the Skoda Fabia is still a fresh car and it’s very well prepared so it should be able to stick the demands OK.”