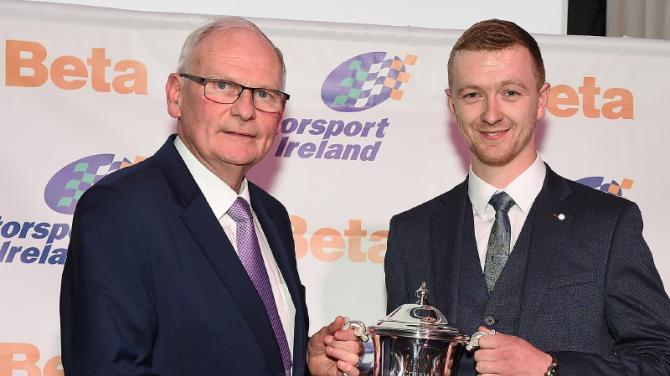 A KEADY rally driver says he was “stunned” after being crowned Motorsport Ireland's 'Young Driver of the Year'.

Twenty-four-year-old James Wilson collects a prize package which includes support to the value of €50,000 for next year's season.

Tuesday night's gala do at the Mansion House in Dublin was the highlight of a very successful year.

James was announced as the winner of the Billy Coleman Award to cap a season to remember.

The rising star of the rally scene was one of three from Northern Ireland chasing the award, among them his friend and neighbour Jason Black.

James reflects on the moment – from being shortlisted to coming out on top.

“There was quite a build up to it with the interviews, selection process and when we made it into the final three, it got really exciting,” he reflects.

“At the awards in the Mansion House in Dublin, seeing all the faces there and awaiting the announcement it started to dawn just how prestigious the award is.

“When I was announced as the winner, it felt like the blood just drained from me.

“I was stunned and was just ecstatic!”

James faced stiff competition during the selection process for the award as he fended off a number of other great young drivers in what has been described as one of the closest decisions for the judges.

Says James: “They were very worthy nominees and at least with the Motorsport Ireland awards it’s not all about the winner, as they benefit from entry incentives and support which they deserve.”

James was nominated for his performances in January and February of this year and went on to further successes throughout the season.

He was the 2018 Valvoline Motorsport Ireland National Forest Junior Rally Champion and also secured a podium finish in the Junior British Rally Championship on the Ypres Rally in Belgium.

He said: “The standards that they and the other nominees set during the course of this year show that the future of motorsport in Ireland is very bright indeed.

“The depth of talent among our young drivers is continuously growing and, alongside our partners in Sport Ireland, Motorsport Ireland is committed to supporting and developing drivers and providing them with every opportunity to succeed at the highest level.”

It is going to be an exciting 2019 for the Wilson team, the car of choice again being a Peugeot 208R2.

An assault on the Motorsport UK British Junior British Rally Championship - as well as another attack at the Valvoline Irish Forest Championship to defend the Junior title - has been planned.

For 2020, the team are planning to compete in France in the Peugeot 208 Rally Cup which has been beneficial to others climbing the motorsport ladder.

Adds James: “It’s been a tremendous year, and not without its ups and downs of course. The team has been superb. My co-driver Gavin Doherty has done a superb job, and now he’s been accepted into the Motorsport UK Academy, which shows just how determined Gavin has been to succeed also.

“The service crew that have kept me in the rally at times have been invaluable as indeed have a few sponsors, including Road Tankers, Armagh, Philip White Tyres, James Wilson Garage Services, TEC Industrial and MVT Transport.”

Now the hard work begins again as preparations and planning are in full swing for the fast approaching season, which begins in January with the first round of the Irish Forestry Championship.