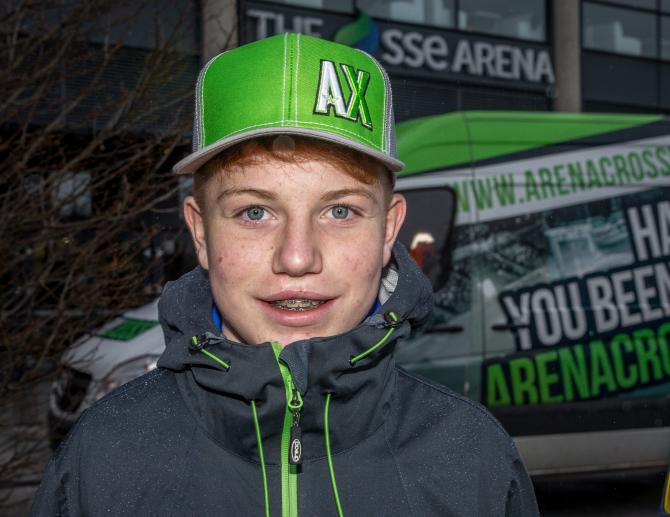 The Arenacross Tour is a three-hour, highly-charged and fast-paced night of non-stop action, that will keep the whole family entertained, and hollering for more!

The 2019 Tour will open at The SSE Arena, Belfast, on Friday the 18th, and return on Saturday the 19th of January for two-nights of ultra-competitive motocross racing, with world-class and homegrown talent battling their hearts out. Above the arena floor – some 60-foot high actually – a bunch of the craziest Freestyle motocross athletes will thrill and delight the crowd with their incredible skills as they whip and flip both man and machine through a series of unbelievable tricks.

Arenacross isn’t just indoor motocross though, it’s an entire night of choreographed entertainment that includes a great sound track, pyro, lasers and live screen back-stage action. AX fans can expect bigger and better from the 2019 Tour as they can win bikes, catch some giveaways, bet on riders, grab an autograph, get to meet the stars, walk the course and go back stage too.

The double-header at The SSE Arena will be unique in that it is the only stop of the Tour to cater for a huge number of local riders. To this end, it will host the All-Ireland Cup on both Friday and Saturday evening. The Cup will see the best motocross racers, from the leading Irish Motocross Championships, go head-to-head in bar-bashing fashion, in a series of short and sharp races to crown the inaugural 2019 All-Ireland Arenacross Champion.

There’ll be plenty more for a partisan crowd to cheer, as Martin Barr, from Ballyclare, arguably one of the fastest motocross racers to come out of Northern Ireland, will contest the full six-round 250cc Pro Lites championship, as will 23-year-old Glenn McCormick from Larne.

On the youth front, 14-year-old Drew McCreanor from County Armagh was one rider, from among one hundred young hopefuls, lucky enough to be selected for the first-ever Team Green Supermini Cup. He will join 11 other youngsters in their quest to be crowned the 2019 champ, and will be relying on the support of the Belfast superfans to lift him all the way to the podium. Belfast is also unique in that it will make history when twin racers from Ballymena take to the Arenacross dirt. Ten-year-old brothers Cole and Robbie McCullough will be bursting with pride when they put their mini 65cc machines through their paces - it’s a safe bet that there’ll barely be a dry eye in the audience when they get introduced to the crowd.

There are great ticket options available with fantastic savings on Friday evening tickets, and substantial additional discounts for a weekend pass. Family tickets start from just £60.00, for two adults and two children, and kids can go for a little as £12! Banish those post-Christmas blues and extend the festive season with a huge shot of family fun and entertainment.

Meanwhile Jonathan Rea, the 2015, 2016, 2017 and 2018 World Superbike Champion, the winningest racer in Superbike history, is lending his considerable support to the 2019 Arenacross Tour in Belfast.

The Northern Irishman - the first rider ever to win four World Superbike titles in succession – rejuvenated motorcycle racing when he took the runners-up slot in the 2017 BBC Sports Personality of the Year. In that same year, his notable success was recognised at the highest level when he was appointed Member of the Order of the British Empire (MBE), in the 2017 Birthday Honours, for services to motorcycle racing.

In terms of Arenacross, Rea is backing the Tour’s Arenacross for Schools innovative initiative in the week leading up to the opening round at Belfast. Wednesday the 16th of January 2019 will see 200 primary school pupils attend an interactive field-day at The SSE Arena and adjoining W5 Science and Discovery Centre.

The purpose of the day is to take children safely through the stages of the creation of a world-class event such as Arenacross. On the day in question, thousands of tons of dirt will be delivered into the venue, in readiness for the construction and production crew to work their magic in turning a pristine concert and ballroom dancing amphitheatre into a full-on dirt-filled race track.

The youngsters will discover the backroom secrets of staging an event of such magnitude. They’ll get to witness the considerable manual and technical labour involved, talk to the digger drivers, sound and light technicians, as well as meeting several racers, FMX athletes, and Arenacross supporters. Rea will speak to the assembled schoolchildren, and share insights into his aspirational journey, he’ll be joined by other Northern Irish big-hitters such as British and World motocross contenders Graeme Irwin and Martin Barr together with a bevy of local racing talent. The children and their parents will then be given the opportunity to attend the weekend’s event itself.

For the latest news and to secure the best seats, or book an Arenacross Racenight VIP Experience, go to www.arenacrossuk.com