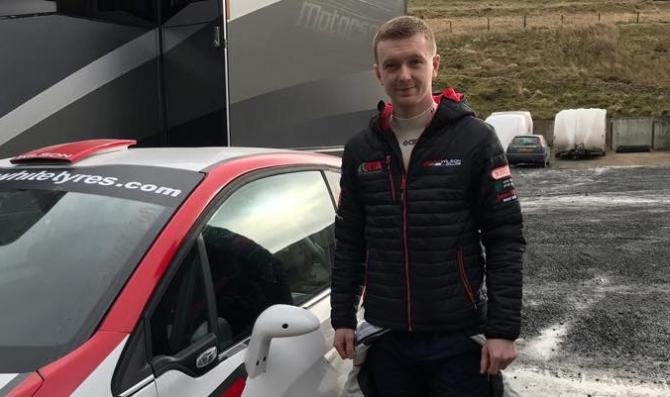 This Saturday’s Cambrian Rally starting in the Welsh town of Llandudno is the start of the serious stuff for the Motorsport Ireland Billy Coleman Award winner James Wilson.

Round one of the British Rally Championship plunges the competitors deep into the Welsh forests, and into the darkness for the final three stages which could provide the sting in the tail!

“It’s going to be some event!” said James who was already in Wales testing his Peugeot 208 R2. “The competition is really fierce in the Junior British Championship. The other 208 R2’s driven by William Creighton, Josh McErlean and Marty Gallagher will be ones to watch and of course James Williams and Jordan Hone who both are very fast in their  Opel Adam R2’s.”

The County Armagh engineer is feeling ready however for the Cambrian challenge following a fine second R2 home on the opening Valvoline Motorsport Ireland Forestry round in Carrick on Suir, where he also kicked off the new partnership with Monaghan co-driver Arthur Kierans. “I am really looking forward to starting the Cambrian. The Irish forestry round was an excellent event to settle in with Arthur and with Philip Case Rally Sport who are now running the car.

"We came away from that rally with a few ideas, and today in Wales we have worked on that, and I feel that I’ve made some improvements. I made some suspension changes and I’m really starting to learn how these changes work, how it alters the car, and today I feel happier than ever with the 208 on gravel. In fact it the first time I have really got to test before a rally and coupled with having a bit more time on the run up the rally to get to the gym, so it’s all helping us focus on the recce on Friday and the rally on Saturday.”

Being crowned the Motorsport Ireland Young Rally Driver of the year and the Billy Coleman Award winner has brought not just the financial assistance of the big prize, but a world of opportunities for James, not least a drive in a Hyundai i20 R5 at the recent Billy Coleman Award Development Day. “ That was a great day and the R5 felt magic, amazing to get it sliding about and it felt in a way relatively easy to drive.

"Really thanks to Sean McHugh’s work, Sport Ireland and of course Motorsport Ireland the added value and experience to date has been mind blowing!
On that day we also had pace-note advice, nutrition advice and a sponsorship and PR seminar. It really is a special time to be a young driver as there is so much to offer and with the announcement of the Motorsport Ireland Rally Academy, there is a serious investment in resources for young rally talent. To have John Coyne’s considerable contribution was also very fitting, and of course like my grandad (James snr) and granny (Hilary) he was a Talbot Sunbeam exponent in the 80’s even clinching the Irish Tarmac title!”

It doesn’t end there as after months of negotiations Raymond Moore the director of the Peugeot Sport UK & Ireland distribution announced a prize fund of £24,0000 stg for the 208 R2 Junior runners in the BRC. If James was to finish top 208 on Saturday it’s an extra £2500 prize, £1000 for second and £500 if he was third, thanks to the support of Peugeot UK and Total.

It all helps to shoulder the significant costs of rallying as does the valuable support of the teams sponsors including TEC Industrial, MVT Transport, Road Tankers-Armagh, Philip White Tyres and James Wilson Garage Services.

Now the countdown is nearly over as the race against the clock begins on the Saturday’s special stages, as James/ Arthur and the Peugeot 208 take on the best. The fight for the coveted British Junior rally crown is on!