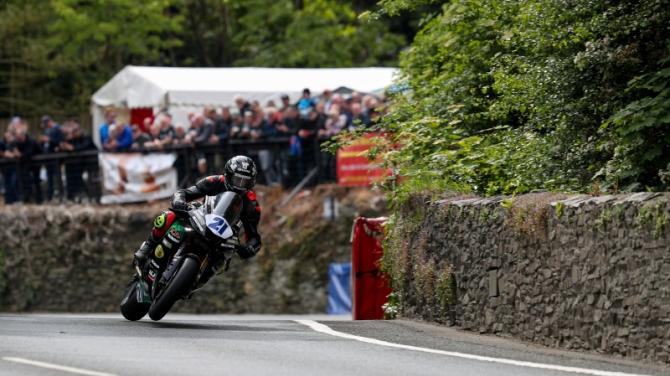 NO stranger to the road racing scene at a national level, Joe Loughlin felt it was time to tackle what is said to be the ultimate test of man and machine, the Isle of Man TT races, writes Philip Magowan.

The first of the Blayney boys’ races would be the Monster Energy 600cc Supersport Race 1, and after a very impressive qualifying session, Joe would be one of only three newcomers to top the 120mph bracket, with a best average speed of 120.419mph during Thursday’s session.

So the first race tap on the shoulder came for Joe, who set off 21st, but unfortunately he would see a DNF for this one, as the Mark Coverdale / ILR Yamaha R6, would buckle a front wheel under him, and bring his first race to an early end, missing near disaster over the mountain section.

An equally, if not more impressive qualifying session aboard the Supertwin, lapping a 116.317mph average, and coming fresh off the back of a North West 200 Supertwin race 2 victory, things were looking great.

A decent start from Joe would leave him 16th as he crossed the line to complete the first lap, with a 112.073mph from a standing start.

Fate would also throw a spanner in the works for this one, as it was another DNF, this time aboard the Team ILR/Mark Coverdale Paton S1-R. The race was won by Peter Hickman, who was trading tenths of seconds with Michael Dunlop, before the fan favourite Ballymoney rider would also retire on mechanical difficulties.

So it was a final crack of the whip for Joe as the TT ebbed closer to it’s close, and it came in the form of the Monster Energy 600cc Supersport race 2. Again, setting off 21st Joe would lose a place and drop to 22nd, as did 5 people behind him, to Manxman Nathan Harrison who has his Honda dialled for the mountain course. This would only work to spur Joe on, as he came back to 21st with Lee Johnston dropping out, and finally to 20th by the chequered flag with a 119.315mph lap, earning him a well deserved and much sought after Bronze replica trophy - a great achievement for a newcomer.