Defibrillator becomes a reality for Orangefield 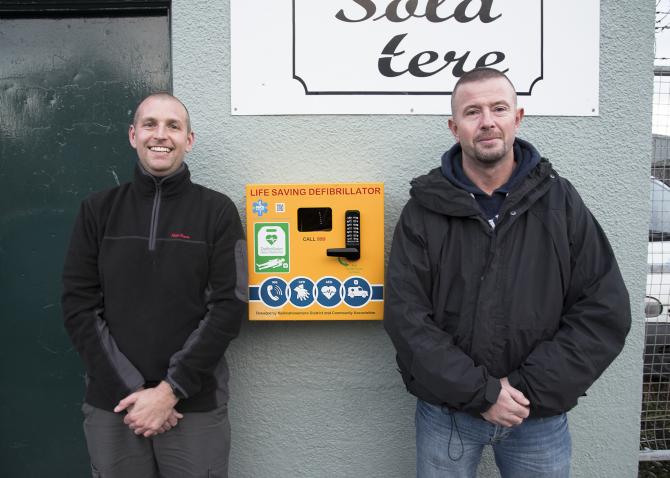 A LIFE-saving defibrillator has been installed in the Orangefield estate in Armagh following a major fundraising campaign.
The Ballinahonemore District and Community Association undertook the challenge during the summer and the important piece of equipment has now been erected outside the Today shop.
Various fundraising intitiatives were held, including a 26 mile run/walk around every Orange hall in the Armagh district to raise funds for the device.
Two local residents Davy Jenkins and Geoff Boyce, also took part in a marathon on the day, which finished with a barbecue, bouncy castle and beetle drive in the hall.
Speaking to the Ulster Gazette, Davy thanked everyone who had generously sponsored himself and Geoff for their marathon and those who helped on the day.
“We have been pleasantly surprised by the community’s response,” he said.
“There was a very good amount of donations and we raised enough to get the defibrillator and the box.
“It means should anybody suspect somebody has had a heart attack, it is the first point of call and they can start resuscitation before an ambulance gets there.
“It is registered with the Northern Ireland Ambulance Service, Also thanks to Shillidays for their help in the placement of the device at the Today shop in Orangefield. Its once you ring 999 and explain where you are, they give you the code for the box.”
Davy revealed that donations were received from various Orange lodges, as well as Shillidays and Deputy Lord Mayor Sam Nicholson.
A collection box was also placed at the Today shop, where the defibrillator has been placed.
Davy said it is hoped a demonstration night will be held in the hall early in the New Year and everyone is welcome to attend.
“We will be putting flyers around the local estate and it will be a demonstration of CPR and use of the defibrillator,” he added.