Hampton Hewitt, Greer Robinson, Brian Lappin, Nigel Matchett, Richard Powell and children pictured with the heiffer which was auctioned on behalf of the customers of WK Powell & Son

A   KEADY man whose young daughter suffers from a heart condition has said he has been left staggered after a fundraising event smashed his target of £50,000.
Richard Powell came up with the idea to boost a campaign by the Children’s Heartbeat Trust to install an echocardiogram machine at the new Children’s Heart Centre, which is currently being developed at the Royal Belfast Hospital for Sick Children.
He teamed up with livestock marts in Markethill and Ballymena to help raise £50,000 between them for the vital piece of medical equipment.
But at last week’s Christmas Show and Sale at Markethill Mart an incredible £52,000 was raised  – exceeding the optimistic target Richard had hoped to raise from both events combined.
“I have been left blown away by people’s generosity, I really can’t thank people enough,” said Richard.
“It is incredible to think we have exceeded the target we set for both events and the Children’s Heartbeat Trust are so pleased – it is the single biggest donation they have ever received.
“On the night itself I was stunned by how much money people were preparing to pay for the auction items. They were just so generous and it is these people who deserve full credit for raising this fantastic amount.” 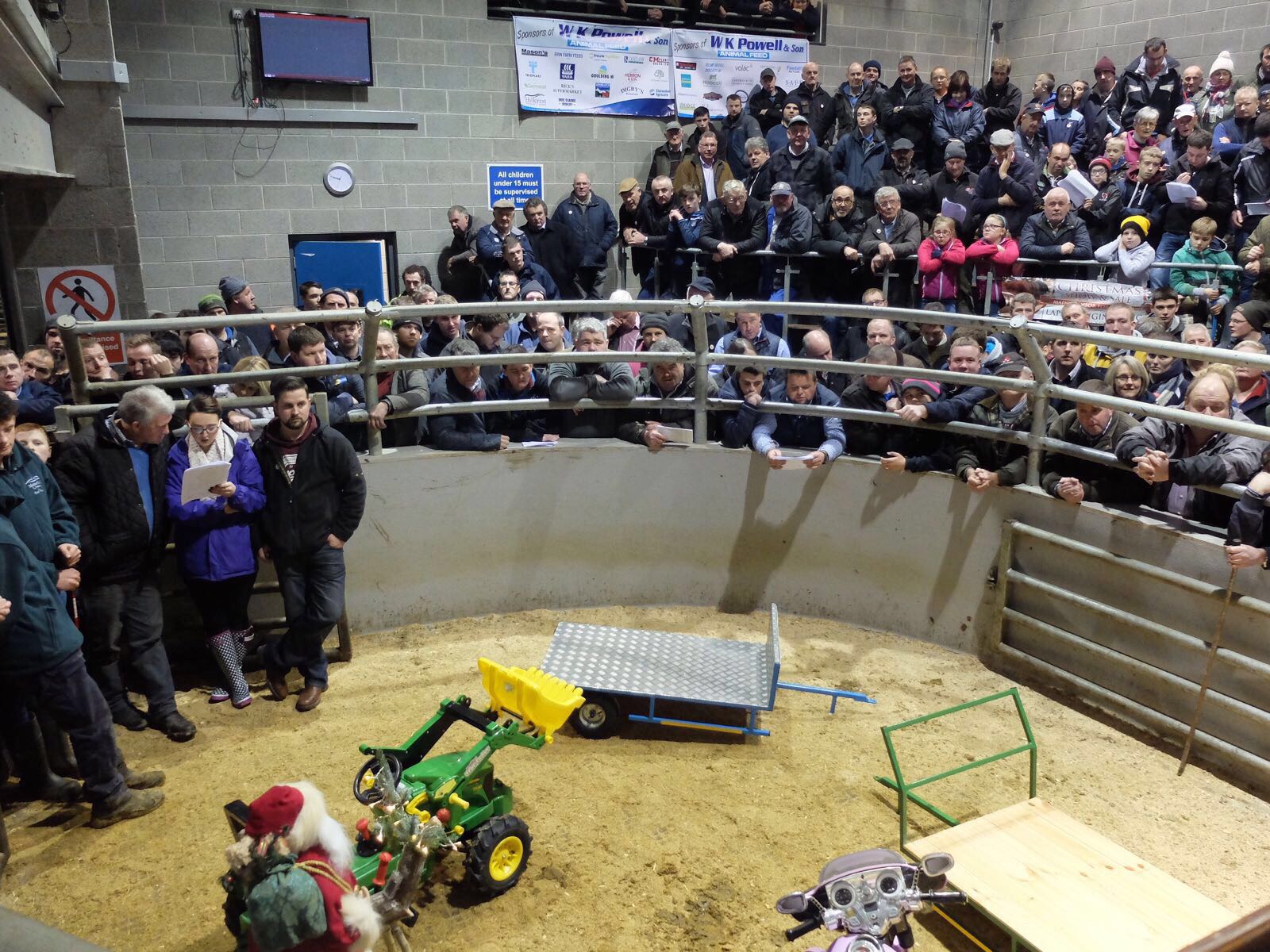 Richard’s daughter, Grace, now eight years old, underwent surgical procedures at just three and six months of age after being diagnosed with congential heart disease (CHD). Grace then had major heart surgery at the age of five.
Over the past six years, Richard – through his family business, WK Powell & Son – has helped raise funds for the trust by holding charity cattle auctions. This year, however, he wanted to do more and so teamed up with Markethill Livestock Sales for their annual Christmas Show and Sale, which took place on Thursday, November 23, where beef cattle, prime lambs and an auction of donated items took place.
Richard donated the first auction prize, on behalf of all who have supported his family business in Keady by generously donating a Charolais heifer. On the night the heifer raised £3,600.  He also donated a heifer for a second charity auction in Ballymena.
“The Children’s Heartbeat Trust has given our family so much support and help since Grace was born, and throughout her surgeries and treatment,” he explained. “We’ve helped raise funds each year through the sale of various cattle but on hearing about the development of the new Children’s Heart Centre, we wanted to do that bit more.
“I approached Hampton at Markethill Mart with the idea of holding an auction to raise additional funds for the charity. Hampton came back with the suggestion of teaming with Shaun from Ballymena Mart to raise the target of £50,000. I would sincerely like to thank Hampton for his full input and backing; and to Shaun for teaming up with us to raise the fund needs for this vital piece of equipment.
“Adrian Cassidy, a friend has also got behind our fundraising by running the Dublin Marathon to raise funds towards our target. I’m grateful for the generous support received to date and with everyone’s input.”
The Children’s Heartbeat Trust been involved in the development of the Children’s Heart Centre – which will provide specialised care for young people living with heart disease – since it’s conception, and says that the funding of this new piece of equipment is “crucial in ensuring that heart children are receiving the best quality treatment possible”.
Speaking on the Children’s Heartbeat Trust’s Facebook page a spokesperson said the charity was humbled by people’s generosity
“What can we say? Markethill Livestock & Farm Sales was just amazing. We are still in shock and extremely humbled by the generosity and support shown by everyone who attended.
“An incredible £52,000 was raised in one night alone! No, that isn't a typo - £52,000. This the highest donation we have ever received from a single fundraising night.
We cannot thank everyone enough involved for their kindness and generosity. From everyone who attended, bought stock, donated stock and auction items, purchased and donated raffle prizes and to all the staff at Markethill who even donated their wages on the night!
“This money will purchase a new portable echocardiogram machine - a vital piece of equipment for the Children's Heart Centre in Belfast.”
Meanwhile. Hampton Hewitt from Markethill Livestock Market, said: “Our annual charity Christmas Show and Sale has been going for four years and is becoming more and more popular. When Richard approached me with the idea of helping Children’s Heartbeat Trust purchase equipment for the Children’s Heart Centre, the answer was clear. Knowing that it will help hundreds of local children like Grace, makes it an important cause for us.
“We know how generous the farming community is with donating livestock, equipment and feed for the auction, but to make it bigger this year we have teamed up with Ballymena Livestock Market.”