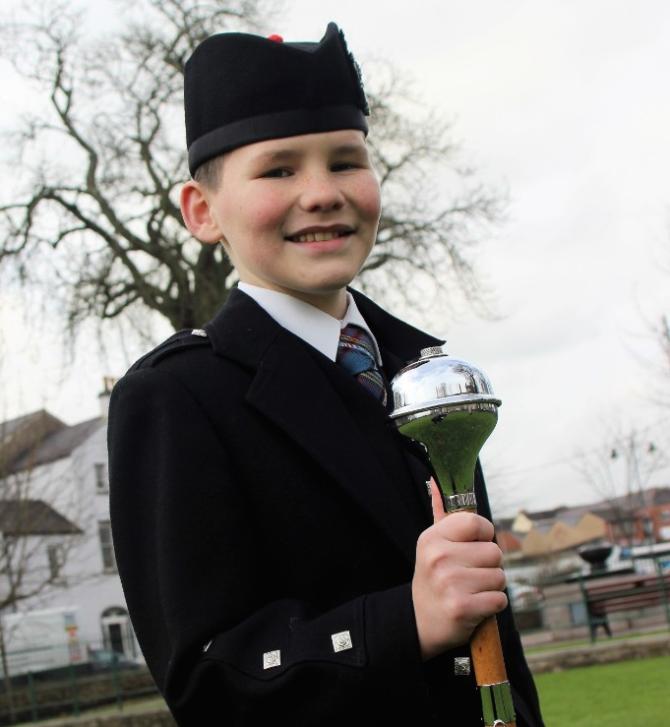 AT  just 11 years old, a boy from Armagh has became the All-Ireland Champion of Champions Novice Junior Drum Major, after taking five consecutive titles, and is now on his way to a prestigious competition in New Zealand.

Louis Anderson, from the small rural community of Knappagh is the son of proud mum and dad Andrea and Mark, and younger brother of Dylan and Beth.

The Royal School Armagh pupil has taken the competition circuit by storm and with expert tutoring and personal devotion, has achieved the ultimate All-Ireland Champion of Champions title – a major triumph for Louis given his young age.

His first major win was Mid-Ulster, followed by Craigavon & District and then North West.

These titles took him through to become Ulster Champion and finally All Ireland Champion.

Collectively these wins placed Louis at the very top of the league.

With these impressive titles under his belt, Louis was selected to take part in a superior competition in New Zealand.

On February 24 Louis travels to Auckland where the City of Sails Pipe Band host the New Zealand championships.

It’s quite a challenge as Louis won’t know the music or even the tempo he will perform to, and part of his training involves adjusting the speed of his routine and allowing for various weather conditions.

Watching him go through his routine is fascinating. It’s a combination of military precision and expert handling of the mace, which appears to come with remarkable ease. Once he starts, Louis dances the mace around his shoulders, spins and casts it between both hands then flicks it into the air, catching it without even looking.

Having provided a demonstration in what seemed fairly fast time, Louis then speeded up, carrying out the same routine with equally meticulous flair.

Louis is a member of Crozier Memorial Pipe Band from Killylea, in which his sixteen-year old brother Dylan is a piper.

Back in 2008, the band asked Louis’ sister Beth (14) if she would like to become junior drum major, but she was involving in dancing and happy to hand over to her younger brother.

Mum Andrea said, “Brian Wilson from the Crozier Memorial Pipe Band and County Armagh Drum Major Andrea McKeown took Louis under their wings. They have been tremendous mentors to Louis and we are very grateful for all they have done and continue to do,

Louis said, “I really enjoyed it. It’s hard work and you have to be very disciplined to keep practising and remembering routines, but I love it. I practice every day. At competitions it’s a mixture of being excited and nervous, but it’s always great fun. I’d love to see more younger children take up drum majoring. I’ve got to travel a lot and make new friends.”

Dad Mark said, “Louis never needs to be reminded to practice. I’m often coming in from work in the evening and he’s out on the front lawn in full flow.”

He also attends the Ulster Scots Piping and Drumming School in Cookstown on Saturday mornings for theory and practical music training.

As an Anderson, Louis wears his clan tartan for performing, which led to him being spotted at a competition in Enniskillen by a pipe band from County Wexford, who have the same tartan as their uniform.

New Ross Pipe Band asked Louis to lead them onto the field as guest drum major for the competition, and he is now an honorary member.

Away from being a drum major, music remains at the forefront of Louis’ life. He plays the piano, sings and enjoys musical theatre.

For now though, Armagh’s own Champion of Champions is firmly focused on the forthcoming competition in New Zealand.
He said, “I’m really excited. I’ll do my very best make everyone very proud. I’m happy my mum and dad will be coming with me, as well as my mentor, Brian Wilson. A big thank you from mum, dad and me to everyone for their kind support and encouragement.”