'Focus on repairs and pothole problem will solve itself' 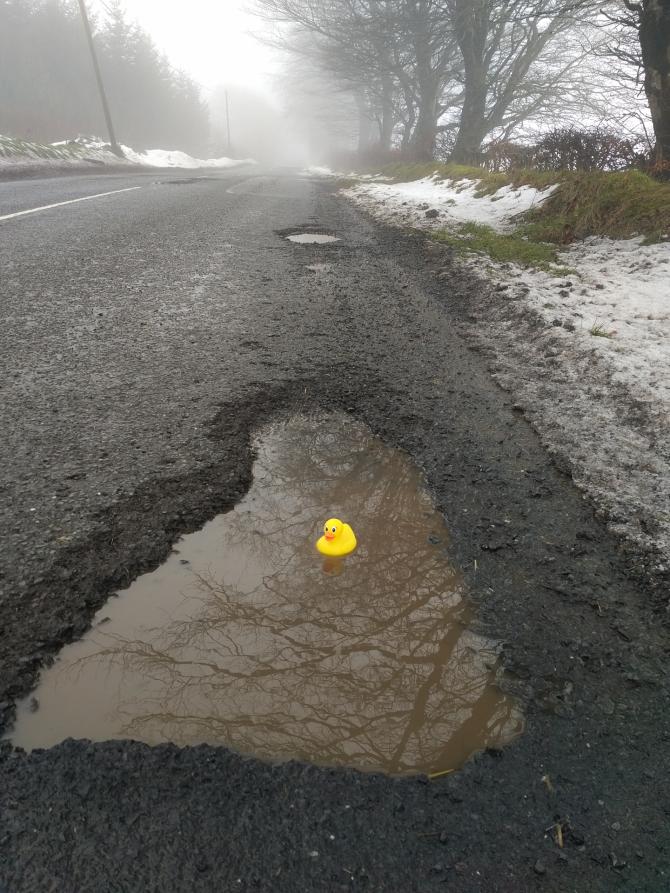 FIX  the potholes and there would be no need for compensation pay-outs.

That’s the empathic message from local politicians as they say that drivers across the wider Armagh area are continuing to report potholes in significant numbers.

An ongoing problem for some years now, last week’s heavy snowfall has only further compounded the scale of the problem, as following the thaw, many potholes have subsequently increased in size.

Almost £500,000 has been paid out in compensation payments to motorists across Northern Ireland whose vehicles were damaged by potholes and other road defects in the past two years.

The figures, from the Department for Infrastructure (DfI) which were released under a Freedom of Information Act request by BBC, confirm that between 1 January, 2016 and 30 November, 2017, a total of 1,935 vehicle damage claims were processed.

Last year it was also reported that Armagh City, Banbridge and Craigavon Borough Council had the highest number of potholes in the whole of the province, with 18,173 defects reported. And there is no sign that reports are reducing, according to Newry and Armagh DUP MLA, William Irwin , who said he has been “inundated” with phone calls from constituents across the area, with one large pothole on the Annareagh Road, outside Richhill, in particular posing a headache for motorists.

“This really is getting people angry and frustrated and you can see why when a significant pothole is left unrepaired for weeks and drivers are damaging their vehicles as a result of hitting it. Where the hole is located on the Annareagh Road, it is almost impossible to avoid if a vehicle is approaching from the opposite direction,” he explained.

Revealing that he has been made aware that a number of vehicle damage compensation claims have been submitted to Transport NI in relation to this specific pothole, Mr Irwin continued; “The fact the hole remains unrepaired and is continuing to damage vehicles means that the cost of a simple repair is a pittance compared to the thousands of pounds in vehicle damage that has been and will continue to be done until TransportNI [DfI] fix it. This is an absolute waste of money and resources and I would question how this can be allowed to happen.

“I have raised these concerns with Transport NI at a senior level and it is simply not good enough that such a significant defect has not been fixed and is posing a risk to motorists that should not be the case.”

Meanwhile, Sinn Féin Councillor Darren McNally revealed that he had 20 potholes to report in the space of just one morning. “From Middletown to Keady and that’s just the number that have been repeated to me,” he added. “Keady in particular is badly affected with potholes, and not just the roads outside the town, but also Keady town itself. There are potholes that have been reported on a number of occasions and have stayed that way for months now. There’s one that is a couple yards long and a couple yards wide that has gotten worse over the past two weeks.”

Adding that it was time that the DfI prioritised pothole repairs, he said the situation was particularly frustrating for car owners. “DfI is sending out workers to fix potholes by judging them on their depth and size, and fixing only the worst ones, while maybe one that’s a yard away remains unrepaired. I understand that they’ve been flat out recently due to the weather, and they’ve done a great job with that, but pothole repairs should be prioritised.”

Councillor McNally’s comments were echoed by SDLP Councillor Thomas O’Hanlon, who described the situation as “beyond a joke”. “Roads are in a terrible state and not minor roads, main trunk roads as well,” he said. “ In recent weeks and months, I have been inundated with complaints from local residents and people are getting extremely frustrated that nothing seems to be happening to repair them despite constantly reporting them to the appropriate authorities.

“People’s cars are being damaged costing thousands of pounds and even though people are putting in claims to the Department of Infrastructure I don’t know if all of them will be successful in getting their money back. The department say they only repair potholes over four inches deep. That’s an appalling approach to take. In recent days we have had everything from snow and frost to flooding and this has only exposed the real condition of many roads. Drains are blocked adding to the flooding, potholes which couldn’t event be described as minor last week are massive this week. It really is getting beyond control and is no laughing matter.”

Addressing the amount paid in compensation, Councillor O’Hanlon added; “Imagine the repairs that could be done to the local road network if this money was made available to the local team to repair roads. I know the guys work hard, but they are starved of resources. In September the department warned money for repairs was set to run out and its obvious it has. I can’t think of one pothole that has been repaired in that time. Someone needs to get a grasp of this situation pretty quick. Its easier to list the roads that don’t need repaired, if I was to start listing every road that I have been approached about and passed through to Roads Service for repair I’d be here to Christmas.”

The state of local roads has prompted Deputy Lord Mayor, UUP Councillor Sam Nicholson to describe them as “appalling”. “The roads in and around Armagh are in a horrendous state”, he explained. “The potholes are huge and on some roads they are more like craters with no sign of yellow markings.

“While I accept that serious damage was caused by the enduring freeze which we encountered over the last few weeks and the continuing nightly sub-zero temperatures, it should not be used to conceal the fact that much of the work just has been simply not prioritised by the department.

“I have been contacted by a large number of constituents who are concerned both by the continuing lack of remedial work and the possibility of damaging their vehicles on one of the pot holes in the innumerable roads throughout the borough.

“In the past I hit a very bad pothole myself and caused hundreds of pounds of damage to my car. Had the necessary repair work been carried out to the roads in a timely and proactive way this would have eliminated this issue for me. Having spoken to others I know I am not alone in this experience.”

Citing the Newry, Monaghan Road and Newtownhamilton roads as particularly badly affected, the Deputy Mayor stressed the issue remained untackled due to the ongoing political stalemate at Stormont. “Having spoken to officials within the department it is clear that infrastructure is clearly under serious financial pressures as a result of having no minister in place for over twelve months due to the current DUP and Sinn Féin impasse,” he claimed. “Consequently all departments seem to be in meltdown, including DfI which clearly does not have the necessary budget to provide the necessary response to maintaining our roads.

“This shouldn't be happening in a modern city and yet no one is accountable because there is no government minister. I urge the Permanent Secretary to act immediately before the situation worsens, otherwise it may be time to consider giving these powers back to councils which have a record of delivery.”

In response a spokesperson for DfI stressed that public safety remains a “priority” for the department. “There is a balance to be struck between building new roads and public transport provision and maintaining what we already have,” they said. “The Department of Finance recently published a briefing paper which outlines the impact of a number of future budget scenarios and we would welcome comments. Any decisions on budget allocation will be for a future Minister for Infrastructure.

“Public safety remains a key priority for the Department and despite a challenging budgetary situation, the Department has this year delivered a significant programme of resurfacing and surface dressing and continues to carry out a programme of routine maintenance, including pothole repairs and street lighting repairs, to meet all essential public safety requirements.”