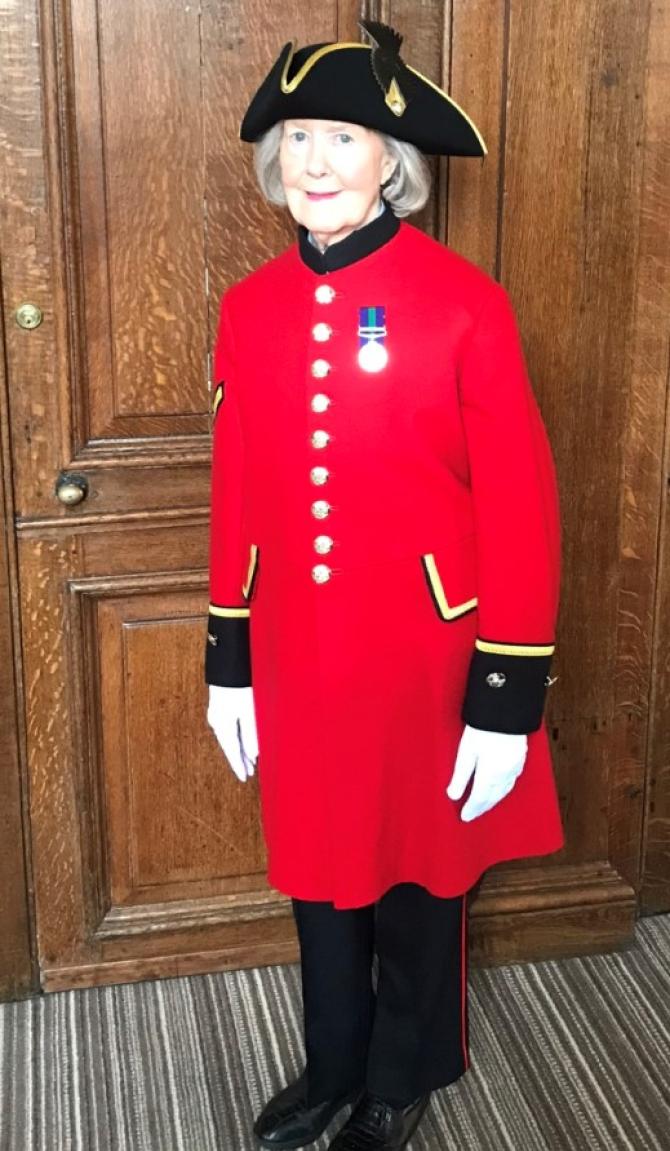 Mary Guidera wearing the famous 'Scarlets' of the Chelsea Pensioners

AN Armagh woman has become the first lady from Northern Ireland to join the world famous ranks of the Chelsea Pensioners.

Mary Guidera left her Victoria Grove home last month for her new life in London where she now lives in a community made up of over 300 army veterans.

The Royal Hospital Chelsea is the home of the iconic Chelsea Pensioners, who are all retired soldiers of the British Army. Since 1962 the hospital has offered care and comradeship for veterans in recognition of their loyal service.

Today some 300 army veterans, 14 of which are female, call the Royal Hospital Chelsea home, including those who have served in Korea, the Falkland Islands, Cyprus, Northern Ireland and World War II. Others may not have served in campaigns, but all understand what it means to be a soldier and the potential sacrifice that it entails.

Mary was born in Armagh and began her army career with the Royal Signals as a communications operator during the Malayan conflict which began in the late 1940s.

Approximately 10 years later Mary left the Royal Signals but her life with the military was far from over. On returning to Armagh she met her future husband Paddy, who was serving with the Royal Irish Fusiliers. The pair met during a function at Gough Barracks in the city.

Paddy’s army career took him around the world and his loving wife was always by his side. In 1981 the Guideras returned to Armagh when Paddy was attached to HQNI in Lisburn. Fittingly his final posting was in Armagh as Quartermaster of 5th Battalion, The Royal Irish Rangers.

Mary had been living alone back in her native Armagh while her son and his family had set up home in London.

“My mother was becoming concerned about travelling over to London to visit,” said Mary’s son. “We said wouldn’t it be great if you could join the Chelsea Pensioner’s but didn’t really think much more of it.

“But thanks to help from the Irish Guards and the Royal Irish Regiment we were able to get mum a place at the Royal Hospital.

“It is lovely having her in London but more than that it has given her a new lease of life and she is really enjoying the experience of being a Chelsea Pensioner.

“She has joined the choir and they are busy each weekend singing at various churches around London.”

The event has taken place almost every year since the founding of the Royal Hospital in 1681 and this year’s ceremony will take place on June 8.

When Mary set off for London last month she did so with the best wishes of her many friends in the city. On December 4 the Royal British Legion held a party in her honour and Mary and her family would like to thank everyone at the Legion for their kindness especially, Terry and Joanne Chin, David Hammerton and Mike Murphy.