Tractor run organisers defrauded out of £1,200 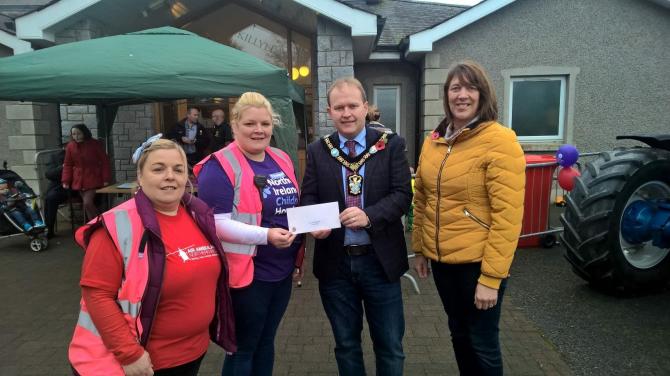 THE local community has rallied behind the organisers of the Killylea Tractor Run after online fraudsters conned the group out of a £1,200 donation to Air Ambulance NI.

The incident occurred recently when the group responded to what they thought was an legitimate email. Unfortunately it was the work of online scammers, which initially left Air Ambulance out of pocket.

The funds were part of £3,600 raised last October and to be divided up equally between Air Ambulance, NI Children’s Hospice and Children’s Heartbeat Trust.

Susan Bloomer, secretary and treasurer of the Killylea Tractor Run committee, said that she “felt sick” when she and her sister, Joanne Hale, committee chairperson, discovered the online bank transfer request – stating the charity was urgently need of the funds –  had instead been the work of fraudsters.

“It’s disgusting. This time last week I just felt sick,” she explained. “The police are now involved as well as the bank, a fraud team… so hopefully we can get it back, but it will take a while.

“The email looked legit, clearly they had been aware of the history of the emails between us and Air Ambulance.”

A PSNI spokesperson has subsequently confirmed an investigation is currently underway and inquiries are “ongoing”. Since the incident emerged, however, the community has donated in excess of £1,200 – with single donations of £600 and £400 made by local business people. “The community has been brilliant. The generosity of the public has been incredible and the money is still coming in. It just shows how you can experience the best of humanity after those who do evil things like that,” explained Susan.

Susan added that if police do manage to recoup the stolen funds, it will also go to Air Ambulance NI as originally intended.
The community’s response has been praised by Alderman Freda Donnelly who said; “It’s great to see the generosity of the public supporting charitable organisations in times of adversity. These email scams are not easy to detect, as they are quite sophisticated. It is always advisable if possible to check with a phone call or set up a password that is registered with the charity or the utility firm, before any funds are released, or if in doubt phone the PSNI on the 101 number.”

The fraudsters, meanwhile, have been branded “heinous and heartless thieves with no moral compass”, by Lord Mayor, Alderman Gareth Wilson, whose chosen charity is Air Ambulance NI. “A lot of hard work went in planning and organising the tractor run charity event, which is now in its fourth year,” he said. “I have nothing but contempt for those who diverted much needed donations away from these legitimate charities.

“While this scam has had a devastating effect on all those involved - event organisers, charities and the public who donated – we should not let these unscrupulous individuals deter us from holding future fundraising events or overshadow the good work that has been undertaken to date to keep these charities afloat – so that they can continue to deliver vital services to those in need.”

Meanwhile, the crime was described as “sinister, cold, calculated and callous” by Newry and Armagh MLA, William Irwim who added; “It really is a total shame and disgrace that the very dedicated and hardworking team behind the Killylea Tractor Run have had this awful crime visited upon them. I attended the event on the day and the public supported it so well raising such a great amount for charity.”

Deputy Lord Mayor, Councillor Sam Nicholson, stressed that he hoped the incident would not deter the public from engaging in fundraising events. “I have nothing but disdain for the perpetrators and I hope the PSNI will successfully bring them to justice so they will face the full force of the law,” he said. “However, as a charity organiser myself I hope these immoral individuals will not discourage any future charity fundraising events because all charities do great work and deliver services to many in need in our communities so they deserve our continued support.”