A new low as thieves target Cathedral in daylight robbery 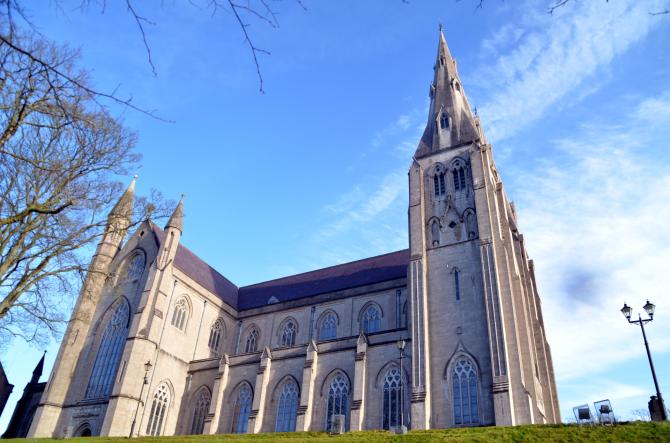 ST Patrick’s RC Cathedral in Armagh has been targeted by thieves.

The PSNI has confirmed to the Ulster Gazette that the Cathedral was one of a large number of properties across Northern Ireland which have had valuable decorative door handles and door knockers stolen recently.

It’s understood a man was caught on CCTV removing several door handles from the Cathedral in broad daylight.

Police started seeing a pattern develop as around 60 reports of stolen handles and knockers started coming in from Belfast, Lisburn, Dungannon, Portadown, Armagh and Newry in recent weeks. However it wasn’t until one of the crime victims discovered her lost items for sale on the internet that detectives were able to trace their suspect.

Officers were able to trace a name and address for a person they wanted to speak to in relation to the thefts and at 7am last Tuesday they raided a house in the city. From there they received information which directed them to another address in Portadown and when they called there they discovered a substantial haul of valuable door knockers, bells, artwork and door handles. There were also several thousand pounds in cash found in the property.

The man discovered at the house was arrested and is currently on police bail pending further inquiries.

“These thefts have really upset a lot of people, in many cases these items were family heirlooms and often irreplaceable. We are making it a priority to get these items returned to their rightful owners as soon as possible.

“The thefts have felt very personal to the victims, often these knockers/handles have been in their family for generations.

“This is a very complex case due to the large number of incidents right across the Province and due to the internet aspect as well. We have our Economic Crime Bureau assisting local officers and I would ask the public to be patient and allow us to complete these inquiries.

“If you have had an item similar to the ones described stolen then please get in touch with us and we will return it to you.

Likewise if you have bought an item like this via an auction site on the internet then also get in touch with us – you are not in trouble as you could not have known you were buying stolen items, however it will be a different matter once you have been informed your purchase was in fact stolen and you don’t come forward to police.”

Inspector Quinn was full of praise for the public in how they worked with police which eventually led to the recovery of the stolen items.

“This investigation is a great example of how the police and community can work together,” he said.

“The public came to us with very credible information and we immediately put a team in place to get to the bottom of this. In terms of policing our community, we are all in this together and I am very pleased, firstly that the public had the confidence to work with us and secondly that we have been able to recover such a large amount of stolen items.

“I have always said that when we get good information we will put the necessary resources into whatever the issue may be and this case is proof that the partnership between the police and the community works.”