Melvin donates his kidney to the man who transformed his life 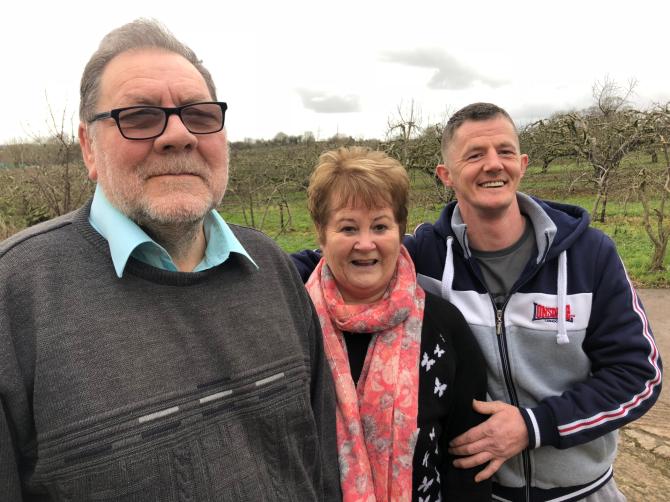 A member of the Greenaway family...Melvin (far right) pictured with Pastor John Greenaway and his wife, Doreen.

At the time John was enduring kidney failure, spending much of his daily waking hours hooked up to a dialysis machine. A man of deep Christian faith, John - who runs the River of Life Healing Centre and Church in the Moy area with his family - turned to the Lord for guidance.

“At the centre we pray for the sick and see a lot of miracles and when I developed kidney failure I obviously prayed for myself and other people prayed for me. I’ve seen many, many people healed, thousands and I was praying myself and I wasn’t seeing really much happening, so I said to God one day in my prayers; ‘Lord, I’m not going to tell you how to heal me, but I’m just asking you to heal me and do it how you want’.”

The prospect of his health improving initially seemed remote, when at first he was informed by a consultant that he was an unsuitable candidate for a kidney transplant due to his age and the supposed state of his heart health. Yet following further appointments at the Royal Hospital, however, the 74-year-old was told that he did indeed have a “heart of a young person” and could in fact, undergo a transplant operation.

Now given the go-ahead, finding a suitable donor remained the only obstacle, as he attended further appointments to discuss the procedure. “The consultant said to me, ‘Well you obviously want a transplant, can you give me a good reason why you want a transplant?' The one good reason I could give him is that I wanted a better life because each night I was tied up to a machine."

Close family members and friends volunteered to be live donors, but for various reasons it didn't pan out, yet throughout it all, John says that he placed his faith in God, remaining positive that one day his prayers would be answered. And for John that day was to be when he unexpectedly met Melvin, who was at first, a complete stranger but one he had opened up his home to. But it wasn’t just John’s prayers that were answered that day, it was also to a defining moment for Melvin, who was going through a difficult period in his life at the time. “I was going through a hard time,” explains Melvin. “I had ended up on the streets and I went to the Housing Executive and they put me into a hostel in Armagh.”

On his fourth day in the city he paid a visit to the Faith Mission Bookshop in Dobbin Street to buy a new Bible when he happened to get into conversation with a store assistant, who mentioned John and his family’s River of Life Healing Centre, which has offered support and help to those suffering from drug and alcohol problems. His decision to go proved to a pivotal turning point for Melvin; “I was living on the streets and never had known the love of a family environment,” he recalls. “I was smoking at nine and I’d left the house at 14... I find it hard to accept help.”

At the centre he found not only help but love from John and his wife, Doreen and their grown-up children, so when the opportunity arose for Melvin to help John, there was absolutely no doubt in his mind. “John has helped so many people in his life over the years, there was no question in my mind, it was case of ‘cut me open’,” he recalls.

“It was an easy decision, I didn’t think about all of the procedures involved… this man was tubed up in bed. This was someone who has helped thousands of people over the years.”

For John, who has spent years preaching in places across the world, and Melvin, it wasn’t merely coincidence that their paths crossed - it was God’s work. “There’s been no problems right from the day I got the kidney,” reveals John. “My kidney count is at 80, 82 which is one of the best kidney functions they’ve ever had in the City Hospital. The consultant said to me; ‘You’re getting a Rolls Royce kidney’, and I said back that I’ve always wanted a Rolls Royce. I’ve so much love for Melvin… he’s the best gentleman I’ve ever met.

“It’s changed my life, I go on a holiday and I don’t have to take a machine because I’m not dependent on one anymore. My kidney is working perfectly, and I was told that it’s the first five, six months that will tell the tale… well it’ll be a year in March.”
They're full of praise for the consultants and medical staff at Daisy Hill and City Hospital; Dr John Hearty, Tim Brown, Dr James McDade who were all involved in the transplant procedure. “They're a great team,” says John. “The treatment was first-class, a credit to the doctors and nurses. I told them, ‘God gave me the kidney and God gave you the gift to put the kidney in me’. We know that this wasn't a coincidence, that it was the glory of God.”

Doreen, meanwhile, says that she and her husband have gained another son. “We have three sons and a daughter and Melvin is another son. We treat him the same,” he reveals. She’s also keen to stress that if anyone finds themselves in a similar position to John, who was initially told he couldn’t have one due to apparent health issues, they shouldn't give up hope.
Looking back, Melvin - who was discharged from hospital in record time 22 hours following his operation - says that his gesture was minor in comparison to what he’s received in return. “I’m the benefactor,” he explains. “God gave me a home and a family all in one go. I’ve a mum, dad, brothers and a sister... people who care for me.

“I asked God for a family and I got one.”