Part of Poyntzpass moves into South Down under proposals 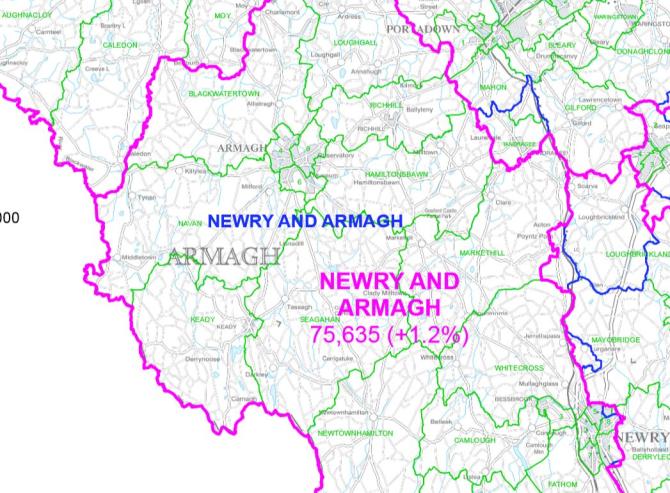 NEWRY  and Armagh is set to lose Tandragee to Upper Bann under revised electoral boundary proposals currently out for public consultation.

The proposal is part of a UK-wide reduction of the number of MP seats from 650 to 600, which equates to one less in Northern Ireland, bringing the number from 18 to 17.

Tandragee is currently part of the Cusher Ward, and a demographic breakdown of the 2001 Census classifies the town’s population as 86.9 per cent Protestant and 10.5 per cent Catholic. In previous local council elections unionist candidates have typically taken the majority of seats in the ward.

Elsewhere under the revised proposals part of Poyntzpass will be incorporated into the South Down constituency. Shifting Tandragee into Upper Bann, however, could arguably result in making Newry and Armagh a more nationalist constituency - a prospect that is almost certain to have a mixed reaction among the main political parties.

Cusher Ward Independent Unionist Councillor Paul Berry, who has previously been a Newry and Armagh MLA, said he overall welcomed the proposal but acknowledged it would have an impact on the unionist vote in future constituency elections.

“On a personal level it would be good for the area to be represented by an Upper Bann MP who takes their seat in Westminster. It’s a positive step to have a MP who will speak for the area.”

This means that he himself will remain a Newry and Armagh constituent, and looking forward, Mr Berry continued; “There is a downside to this, I think that it’s important to acknowledge that this is going to have a considerable impact on unionist representation in future elections.”

The possible political ramifications were also acknowledged by fellow Cusher ward representative, UUP Alderman Jim Speers who said Tandragee had been “a part of the constituency since its inception”. “There’s other ways of squaring the circle without taking Tandragee out of Newry and Armagh,” he said. “Probably from the Boundary Commission’s point of view, it’s probably well thought out. They have to reduce the number to 17.

“As a party we have yet to discuss it but we will be looking at this proposal in close detail and making our recommendation on it.”

That was also the consensus of Newry and Armagh DUP MLA William Irwin who said that his party would “study closely the proposals before responding”.

He explained; “Since the discussion commenced on potentially reducing the number of constituencies across the UK and in Northern Ireland, my party has been critical of proposed changes and the wider ramifications.

“As a party we submitted our views on previous commission proposals and this was in response to widespread concerns on a number of issues. The Commission has now released its most recent report and our party will study closely the proposals before responding.”

Also taking time to consider the revised proposals is Newry and Armagh MLA, Justin McNulty who said; “At a first glace these proposals are in line with what had been previously removed. This will see Poyntzpass, Tandragee, Laurelvale and its rural hinterland move from Newry and Armagh into Upper Bann. The people in these communities naturally look to Newry and Armagh as their Parliamentary and Assembly Constituency.

“The SDLP will take the coming weeks to analyse the details of these proposals and make representations to the Boundaries Commission in due course.”

Meanwhile, Sinn Féin in its response did not specifically address the proposal’s impact at a local level, but instead focused on the overall picture for the province, claiming that it would lead to “significant inequalities” - adding that the latest Boundary Commission’s plans “closely resembles proposals tabled by the DUP” - a claim that has been refuted by the commission.
Under the plans, parliamentary titles Lagan Valley, Strangford and North Antrim would disappear and a new constituency named Causeway would be created out of Ballycastle, Ballymoney and Coleraine.

North Antrim would also be renamed Mid Antrim, talking in parts of the existing constituencies of East Antrim and South Antrim, while a part of Lagan Valley would merge with Strangford and a part of South Down to create Mid Down - a new constituency.

“The Boundary Commission proposals mark a significant shift from the 2016 proposals and confirm our worst fears about the new boundaries,” said Mr Mickey Brady, Newry and Armagh MP.

“The commission has moved away from its own rationale about ‘retaining closer alignment to existing boundaries’ with four constituencies disappearing altogether and it has also abandoned its commitment not to apply Rule 7, a power which is not available to commissioners in Britain and enables them to go beyond the normal constituency totals.

The Sinn Féin MP continued; “In all, the Boundary Commission have made an unusually large number of changes to scores of wards when compared to their original proposals. Clearly they have questions to answer as to how their plan was so radically altered, particularly as many of the new proposals closely mirror a DUP submission to the Commission.

“Given the history of discrimination and gerrymandering of the northern political system we have to ensure that any boundaries accurately reflect the electorate.”

Written representations may be made online at the Commission’s consultation portal, www.bcni2018.uk or by email or letter on or before March 26.

The commission will then consider all representations received during each stage of the consultation process before submitting its final recommendations to the Secretary of State before October 1.