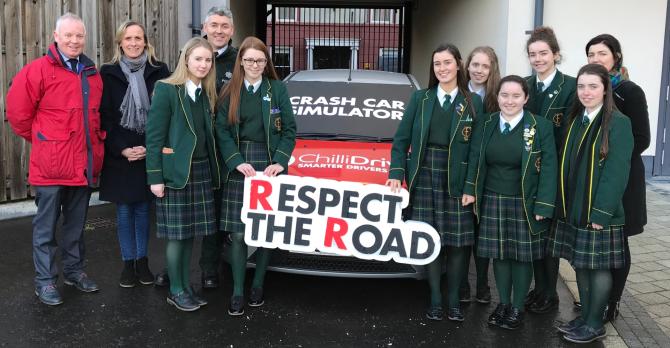 Pupils from St. Catherine’s, Armagh attended a cross-border road safety event at the Armagh offices of the North-South Ministerial Council.

THE  PSNI, An Garda Síochána and the Northern Ireland Fire and Rescue Service were on hand to deliver presentations and demonstrations to over 70 pupils from five schools from Armagh and five from Cavan, Louth and Monaghan.
PSNI Officer Kieran Quinn had a clear message to those in attendance, “Speeding and inattentive driving seems to be the main causation for road traffic incidents. Slow down, take time and if you’re in a vehicle don’t be afraid to shout out the message ‘slow down’ if the car is going too fast.”
Mrs Ruth Hutchenson, who tragically lost her son to a road accident two years ago, was also present as guest speaker and gave a powerful statement on what it means to lose a loved on the road. She implored the pupils to take on board everything they were being told throughout the event.
This event was a key opportunity for Autoline to exhibit their car crash simulator which to date has reached over 25,000 pupils in schools and colleges as part of their wider ‘Respect the Road’ awareness campaign.
The simulator is a specially equipped Ford Focus ST that has been adapted to include in-car screens, speakers, smoke machines and bespoke hydraulics.
The vehicle is used to recreate a real life fatal incident that led to a 17-year old driver being sentenced to prison.
The PSNI recently announced a 7% reduction in road deaths with a total of 63 in 2017 and in their end of year statistics, the Road Safety Authority reported that 158 people lost their lives on roads in Ireland last year, which signified a 15% drop from the 186 lives lost in 2016.
PSNI statistics for the the Armagh City, Banbridge & Craigavon Council area show a 40% decrease in road deaths in 2017 compared to the previous year. There were 6 fatalities, 3 of which were people under 25 years old.
Suzanne Curtis, Autoline Insurance Group’s Marketing Manager, said:
“With our ‘Respect the Road’ campaign we are trying to reach as many young drivers as possible so that we can educate them on the dangers faced on our roads and to put in place a mentality of awareness and responsibility that will stand by them for years to come.
“While we are happy the statistics show a decline in road deaths in 2017 both north and south of the border, we see any death as one too many and we hope our work in the area of road safety, particularly with young drivers, can help reduce these statistics even further.”