Single stretch of Armagh road had a total of '51 defeats' 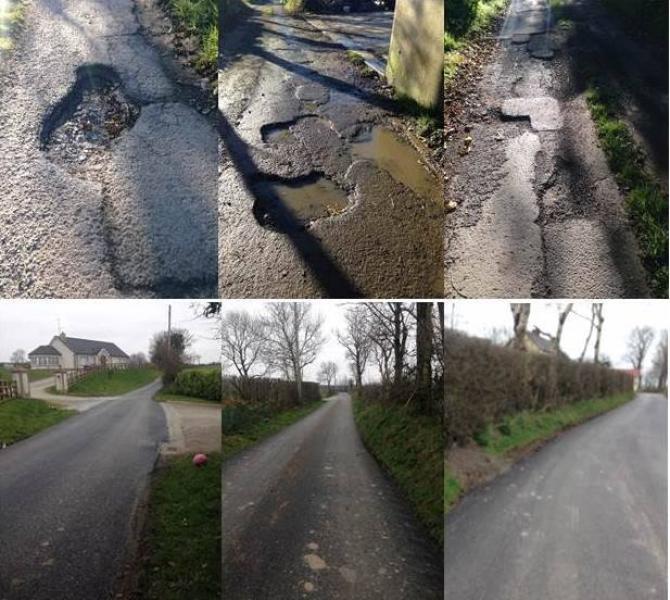 The crumbling state of the area's roads.

ONE of the main routes used by motorists in Armagh had 51 surface defects recorded by the Department for Infrastructure (DfI) last year.

The road in question is the main Armagh to Portadown road, between the Drumman Heights roundabout to the Corcreevy Road - according to DfI figures.

Another stretch of road that recorded highly in 2017 lies on the A28 Markethill to Newry road, which had over 40 defects spanning over roughly a mile long.

Elsewhere the DfI noted 26 surface defects on the Killylea Road - another popular route for motorists - between Elm Park Road and Navan Fort Road, with a further 11 recorded between the Ballycrummy Road and the slip road.

In Armagh City itself a significant number of road defects were also logged by DfI with 23 between Upper English Street and Callan Street and 25 located on a stretch of the Callan Bridge Road. One of the single highest figures recorded was 31 defects along the Mall East, between College Hill and Gaol Square. However, parts of the Mall have undergone work in recent months as part of a major resurfacing programme.

Meanwhile towns and villages outside Armagh have also recorded significant figures. A stretch of the Bessbrook Road - located between Mountnorris and Markethill - had 35 defects, while a stretch of the Newtownhamilton Road in Lisnadill had 30. A stretch of the Monaghan Road on the outskirts of Madden, meanwhile, had 24.

On the outskirts of Keady, part of the Annvale Road recorded 27 defects while a stretch of the Clady Road close to Mowhan logged 19.

The state of local roads has come under increased scrutiny following a significant number of pothole complaints by motorists amid the recent cold snap, which has compounded the problem. The issue has prompted political representatives to urge the DfI to prioritise funding for surface repairs. In response, the DfI has insisted it has “delivered a significant programme of resurfacing” amid budgetary constraints.

The status quo, however, has prompted South Armagh councillor, David Taylor of the UUP to describe local road infrastructure at “breaking point”. “Day and daily I receive calls from constituents outlining their concerns about the very poor condition of local roads,” he explained. “And there is understandably increasing frustration and deep anger regarding the ongoing lack of investment by the Department for Infrastructure in the roads network.

“Rural residents in particular are bearing the brunt of the very poor condition of local roads and not only is the current state of our roads comprising the safety of motorists, many are also incurring considerable costs as a consequence of necessary repairs required to their vehicles through damage caused by various defects on roads.”

Councillor Taylor emphasised that there was a need for “clear, urgent investment” in order for an improvement in the condition of local roads to occur, as the current situation is “unsustainable”.

“I am extremely concerned at the ongoing deterioration in condition of local roads. There is no doubt that rural roads in particular are in a completely unacceptable condition and the only way I can describe the local roads infrastructure network at present is being at ‘breaking point’,” he stressed.

Local TransportNI staff find themselves in a position at present where they are unable to undertake necessary improvements to roads because of the lack of finance being provided to them centrally by the Department for Infrastructure.

Calling for the DfI to undertake an urgent review of its investment programes, he continued; “The Department for Infrastructure needs to urgently review its position on the lack of investment in the roads infrastructure network and ensure that priority is offered to the provision of essential funds to improve the condition of our local roads.

“I can’t bear to think of the consequences going forward if the current policy of lack of investment continues, such is the unacceptable condition of local roads presently.”

The DfI has previously underlined that any decisions on future budgets lies with a minister, stressing that public safety remains a “priority” for the department. “There is a balance to be struck between building new roads and public transport provision and maintaining what we already have,” said a spokesperson. “The Department of Finance recently published a briefing paper which outlines the impact of a number of future budget scenarios and we would welcome comments. Any decisions on budget allocation will be for a future Minister for Infrastructure.