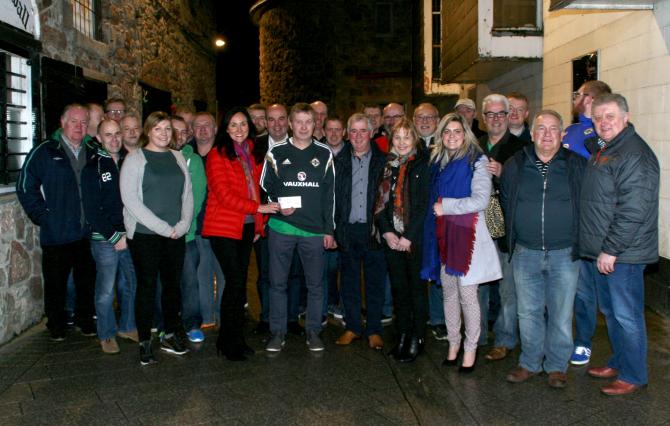 Armagh's Northern Ireland Football Supporters Club along with Joanne Shilliday, Proprietor of the Hole in the Wall Bar presenting a cheque for £2946 to representatives of the NI Air Ambulance.

THE family of Lesley-Ann McCarragher have paid tribute to the local football fans who have raised almost £3000 in her memory.

Last week the City of Armagh Supporters Club presented a cheque for £2946 to the Air Ambulance Northern Ireland in memory of Lesley-Ann who was tragically killed in a hit-and-run incident outside the city in 2016.

Speaking after the club’s Annual General Meeting outgoing chairman, Michael Kerr said: “Making contributions to local charities that mean something to our members has always been one of the cornerstones of the City of Armagh Northern Ireland Supporters Club and to be able to hand over a cheque for £2946 to a worthy cause like Air Ambulance NI gives me tremendous pride as the outgoing club chairman.

“I would hope that our club is able to keep these sort of efforts going in the years ahead and that the McCarragher family can find strength through the support of the community. Their own efforts behind Air Ambulance NI have been absolutely remarkable”

The McCarragher have said they have been touched by the club’s efforts in raising “such a fantastic sum of money for the Air Ambulance NI in memory of Lesley-Ann. She loved football and was both a supporter and player having just joined Mid-Ulster Ladies shortly before her death.”

The main fundraising efforts were the Spirit of 58 film night at the Market Place Theatre, a ticket auction for the Switzerland play-off game and the club’s popular Christmas quiz which was held as always at the Hole in the Wall Bar, the venue that continues to host and support the City of Armagh NISC.

Lesley-Ann’s parents, James and Liz McCarragher were present on the evening while Kerry Anderson and Colleen Milligan attended on behalf of the charity.

Before the presentation was made by club member Brian Monaghan, an uncle of Lesley-Ann, the charity representatives addressed the packed meeting, passing on the gratitude of the family and the charity as well as giving a brief outline of the scale of the fundraising efforts required across Northern Ireland to keep the Air Ambulance in the air.