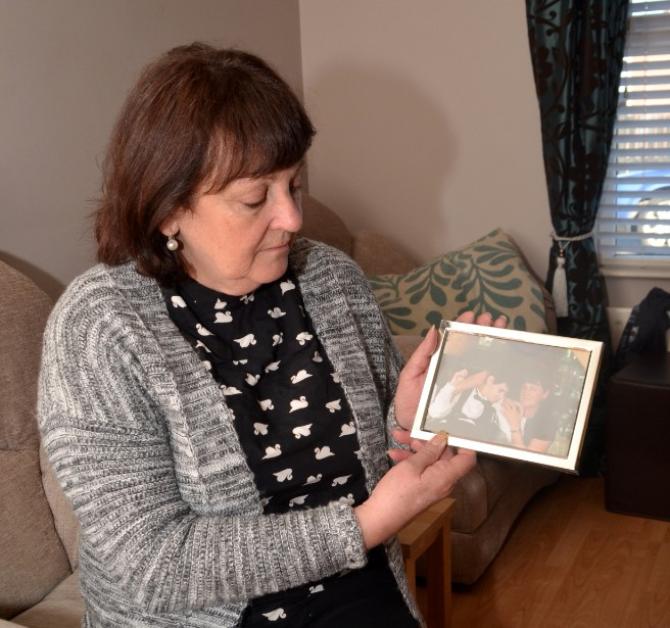 Patricia Wilson, from Keady, holds a picture of her precious son Sean, who passed away in December. She has bravely urged other families to fight for adequate care services and never give up.

THE mother of a young Keady man who died in December has urged the parents of other disabled children to fight for everything and never give up.

Patricia Wilson's son Sean Cripps, who was born with cerebral palsy, passed away on December 22, last year - almost a month after he celebrated his 30th birthday.

Sean, who also suffered from epilepsy, visual impairment and scoliosis, which causes curvature of the spine, defied all medical expectations to reach this age.

For three decades, Sean was given the care he so desperately needed at home by his loving mother, who has two other grown up sons Conor (35) and Liam (27).

As a result of his condition, getting out and about often proved difficult for the family as Sean required a specially adapted wheelchair.

Still grieving for her much loved son, Patricia, from Granemore Park, has offered words of encouragement to other families facing a similar situation.

“Unfortunately you have to fight for every little thing and when you think you’ve got it, sometimes it’s just taken away from you,” the 59-year-old told the Ulster Gazette.

“It’s such a hard, hard thing. You get tired almost constantly and sometimes your fighting spirit takes a knock and you tend to pick yourself up and go again. You really do have to, as you have to do it for your dependent and for yourself.

“If you’re not able to cope and give what your dependent needs, you are unhappy and if you are not happy, it just rebounds on everything.”

Patricia spoke of the importance in providing respite for relatives offering care on an almost full-time basis and recalled how the lack of facilities is “the biggest bugbear for any family”.

“With Sean, there was no doubt he was disabled, but for other families who have their children, often it's not so obvious and it's very, very hard for them to manage.

“People on the street just think somebody is being naughty. It's also about getting help at home as day centres are very hard and difficult to get nowadays.

“I was always lucky with Sean as he was happy with no behavioural problems or challenges, but it's a whole minefield.

“You are not given all the advice you need - it's not until it's a crisis that you find out maybe something was available, but it wasn't offered.

“My advice to others would be never ever feel guilty about it or think you've had enough.

“If you could go to a support group, you can say how you feel and everybody there would know how you feel.”

Over the years, Patricia often found comfort from others experiencing similar situations, through her involvement with the Armagh Carers Group, which meets monthly in the city.

“We meet just once a month for coffee and go away for days and for lunches and Christmas dinners. It’s all very informal, but you do find out things talking to other parents.

“I feel there should be groups and drop in places where you could go in and ask questions about entitlement and what is available, as well as help and support.”

While Sean received respite care at Oaklands in Armagh and Woodlawn in Dungannon, Patricia feels more resources should be available to help families.

“Oaklands is only available five days a week and it has been cut so badly. Sean went there but at the time it was open seven days a week.

“Sean used to go to Woodlawn in Dungannon, but you have a limit of nights and they assess how long you need.

“They say a maximum of 14 nights you can have all together and they are trying to have it now that you get 56 nights a year.
They cut mine about a third and it would have been cut again.

“With those 14 nights, the rest of the family want to go on a two week break, but you can't do it as you need at least 16 or 17 nights for that.

“They could go to private nursing homes, but they couldn't take Sean because he was too complex.

“There is even talk about Woodlawn changing to challenging behaviour, so they are looking other places for complex needs.

“You just feel worn out the whole time. It's all cuts and everything else, but in my eyes it's bad management.

“When Longstone was open, Sean would have used that for respite and then the Trust’s policy was no hospital settings for respite.

“Somewhere like Longstone was perfect for Sean’s needs as they had so many amenities at hand. Nowadays, Woodlawn has to cover such a big area and it is a nightmare.

“I know it's hard at times but you just have to push and push, otherwise they will walk over you.

“For a parent with a disabled child, you are always thinking if you go before them, what will happen to them and that's in your head and you almost hope your child will go before you, otherwise where would they end up and would they be alright?”