'Pawsome' pair are ready to take on Crufts 2018 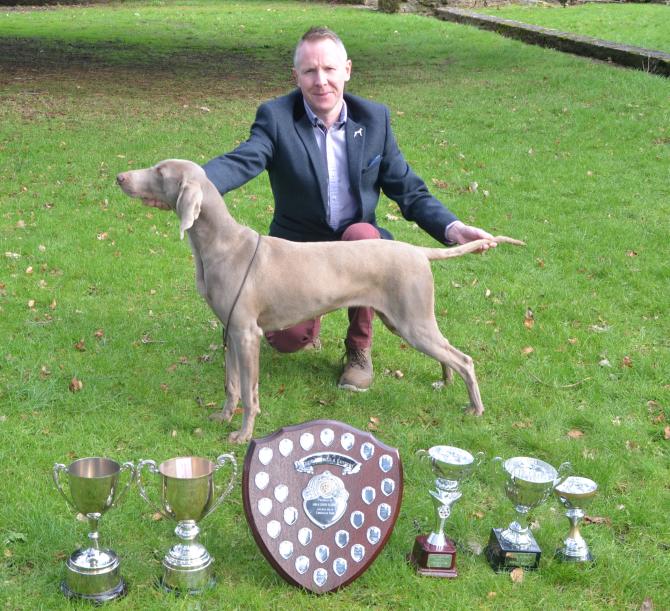 Armagh man Colin Nugent pictured with his Weimaraner dog Diva who will participate in Crufts.

ARMAGH  man Colin Nugent will be heading off to England next month with his beloved dog Diva to participate in Crufts 2018.
The dog enthusiast and his four-legged friend won the qualifying round held in Belfast last year and is delighted to have made it to the final showdown, which will bring together over 21,000 dogs in Birmingham’s NEC arena to compete in a host of categories.

“Diva’s a showdog who we got from a kennel in England from a top breeder. She’s two years old in two months’ time and I’ve been taking her to shows down south and in the north,” explained Colin.

“She’s a Weirmaraner with a grey, silver coat. Weirmaraners are nicknamed the ‘grey ghost’.”

“The breeder had already named her Diva and we didn’t want to change it. She’s a lovely, placid dog, a great family dog as she’s good with people.”

No stranger to winning with a host of awards under his belt, Colin’s acutely aware of how prestigious the name ‘Crufts’ is in dog competition circles at a global level.

“They come from all over to Crufts, they come from everywhere, from America… I’m delighted to have just qualified,” he added.

Diva will be competing in the gundog category, which brings together such breeds as Retrievers, Irish Setters and Pointers, among others.

The first stage of the contest involves the pets performing a lap of the competition arena accompanied on a lead by their owners in the presence of judges and spectators.

Closer inspection of the gundogs, so named due to their effectiveness in retrieving game during hunting shoots, then follows.

“The judge will check to see if the dog is in the right standard and then may ask to run the dog up in a straight line, or do a lap around the arena again, to watch for movement, to see how the dog moves,” he revealed.

With less than a month to go before the final on March 11, Colin has been working hard with Diva since the pair qualified to prepare for Crufts.

“We’ve been doing a bit of practising,” he revealed. “Diva’s won best of breed at championships and at open shows, as well as coming second and third in the All-Ireland Gun Dog Show in the last couple of years.

“She has three green stars, another four and it would make Diva a champion dog.”

Regardless of what happens on the day, however, Diva will always be a star in Colin’s eyes.

“She’s just that type of dog that’ll be at your heel, and follow you everywhere. She’s lovely,” he said.