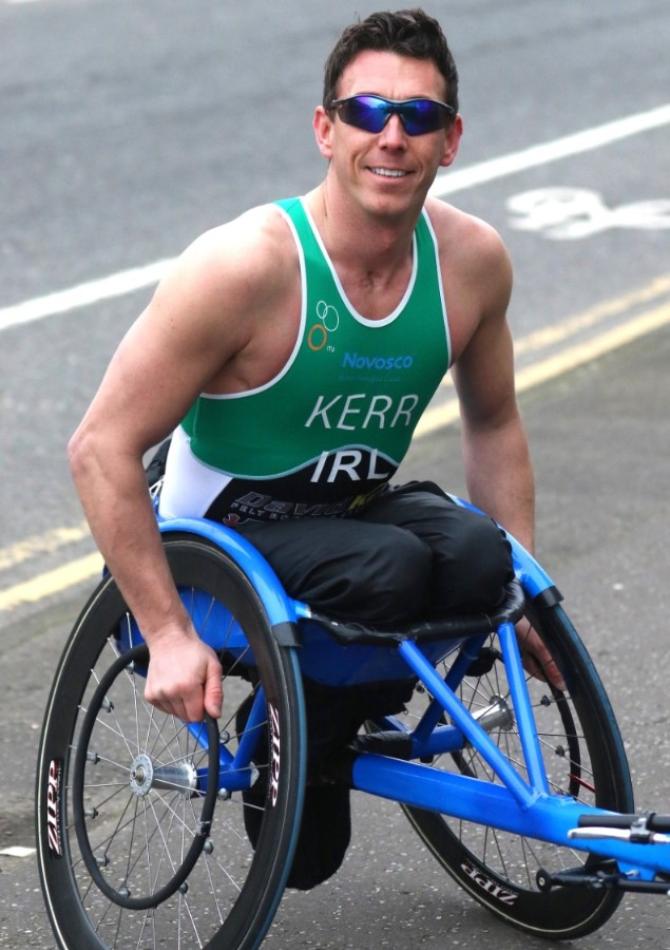 David Kerr who has qualified for the Commonwealth Games in Australia.

A PORTADOWN man paralysed in a motorcycling accident 18 years ago is about to make history after becoming the first paratriathlete from Northern Ireland to qualify for the Commonwealth Games.

David Kerr, who was paralysed from the waist down in May 2000, will travel to Queensland’s Gold Coast on March 26, for the international multi-sports event, which runs from April 4 to 15.

In a truly inspirational story, the 35-year-old will be the only person from Northern Ireland making the journey to Australia, to compete in the triathlon event which will take place on April 7.

Speaking to the Ulster Gazette, David recalled how a lot of hard work has been put in to get this far, but he has described it as “a great experience”.

David, who works in the office of his family’s roofing business, has been dedicating any of his spare time training for the upcoming triathlon event.

Having won the All-Ireland event in Galway in 2017 and coming sixth in the Spanish round of the world championships, as well as fourth in the World Triathlon Final in Rotterdam last September, his ambition now is to qualify for the Olympics in Tokyo in 2020.

“This year coming up, I have to compete in the Commonwealth in April, then at the start of May, I have Spain and end of May, London and then June there is Italy, July, it’s Canada, Florida in September and Portugal in October.

“I did about four European trips last year which was a good experience, but the more you do, the easier it becomes.

“I’m nervous to be competing against the best in the world. Normally in Spain or Europe, you have the middle of the road guys, but most of the bigger guys would be going to Australia or Canada.

“I was a paracyclist for Ireland from 2010 until 2015 and then I took a notion that I wanted to do triathlon.

“I have the one event on the 7th of April and after that it is continued training when I get back for the rest of the year,” added David, who admits his accident was “massively life changing, but in a good way”.

Local musician and road racing champion, RJ Woolsey from Ahorey, has been so moved by David’s story, he has decided to host a special fundraiser and moral support evening ahead of him leaving for the Commonwealth Games.

The RJ Rocks the 80s evening will take place at the Corner House, Derrymacash, on Saturday, March 3 at 8pm.

“It inspires me when I see someone like Davy, especially in their early 30s to start such a project, and after three years of dedication, he has qualified for the Commonwealth Games in Australia next month,” RJ said.

“When I mentioned having a night of moral support for him, he replied ‘Do you think they would come along?’, such is the quietness of the man.

“But I think it’s a great idea because when he is over there along with his partner and personal trainer, Andrea Nash, he will remember the support he has back home too.

“That’s why RJ Rocks the 80s solo act will be playing this Saturday night in the Corner House at 8pm. Anyone who would like to donate a raffle prize etc, can contact both of us via Facebook or telephone RJ on 07598 714039. Davy will be there to tell us his story at the end.

“It’s more of an entertainment get together for moral support than a fundraiser,” added RJ.