‘It’s time to get your act together’

Richhill mother’s plea to politicians as son waits for treatment 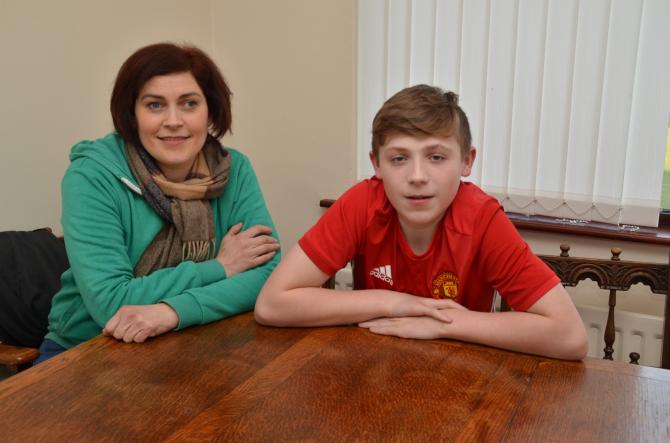 Kathryn McCready pictured with her son Matthew at their home in Richhill. KT180923

“OUR  politicians need to get their act together, end the political impasse and focus on what’s really important, which is getting our health services to work.”

That’s the emotional plea from a former NHS nurse from Richhill who said that she had to persist in ensuring her son got his first appointment to see a specialist spinal consultant at Musgrave Park Hospital in Belfast after she was informed he faced the prospect of a two-year wait.

The potential lengthy delay posed huge problems for Kathryn McCready and her son, Matthew Long (14) who suffers from scoliosis – as a result of complications from being born with a rare bone condition, called conradi-humernann syndrome – which requires a spinal brace in order to correct body misalignment.

Kathryn firmly believes that a 24-month delay in having the brace fitted, could result in Matthew –  who is a student at Clounagh Junior High School in Portadown – undergoing spinal surgery, a procedure she’s keen to avoid as Matthew has undergone 10 surgeries since he was four years old, when he had major limb reconstruction on his left leg.

Relieved that an appointment has now been fixed for a date next month, Kathryn stressed that the experience has left her very frustrated with the current Stormont crisis, prompting her to speak out to highlight the impact of the stalemate on people’s lives.

“There’s a lot further to go in Matthew’s treatment but I know I’m lucky, I think I got this appointment with another doctor within the clinic through sheer persistence in ringing them. I was initially advised to wait for a cancellation, but this is a specialist appointment, and if you’ve have one, you’re not going to miss it. In fact you’d make sure you didn’t,” she told the Ulster Gazette. “With a two-year wait it could be perhaps be that others are just waiting for a letter, unaware of the fact that there’s a backlog.

“I’m not slating the NHS, I was a nurse for 20 years, I’m proud of the NHS and I believe in it. The care Matthew has received at Musgrave Park has been fantastic.

“Waiting times have always been an issue for the NHS, but what’s happening now is down to the Stormont impasse. When I initially told that there was a two-year backlog I asked was it down to funding, and I was told yes. Our politicians may be aware of the overall picture, they may understand what’s going on in the A&E departments, but when it comes to the individual narrative; what’s going on for the one person, who may not be acute but could be living with a chronic condition, they don’t appear to understand it at all.

“Matthew’s condition is serious enough and he’s had so much to deal with already. He’s so tired and he has dull, discomfort all the time and I now there are so many others out there experiencing similar things.”

Her comments come as the latest waiting list statistics published by the Department of Health reveal that a total of 271,553 patients were waiting for a first consultant-led outpatient appointment as of December 31, 2017 – a rise of 10.3% compared to the same period in 2016. Almost 30 per cent of patients (80,651) meanwhile, have waited over a year for their first consultant-led visit, compared to 47,072 (19.1%) a year ago.

The Belfast Trust has since issued an apology, with a spokesperson stressing that the “average waiting time for a scoliosis assessment appointment is under 6 months” “Belfast Trust regrets that any patient has to wait an extended period of time and we continue to work with the HSCB and the Department of Health to reduce waiting times for all patients,” they said.

“We are pleased this patient has received a date for an appointment and like all patients this will be an opportunity to discuss treatment pathway. A patient’s treatment pathway will be dependent on their clinical condition at that time. If any patient is assessed as requiring spinal bracing the waiting time for this is in the region of four to six weeks from initial measurement to final fitting.”

For Kathryn, however, the blame for the situation lies squarely with the absence of a working Executive, and not the NHS. “If I could speak directly to the politicians I would tell them; ‘You need to get your act together’. There needs to be a health budget for the people, one which is at the point of need. I think politicians need to realise that the public’s not blaming the NHS, the public are now so disillusioned with the situation. The politicians have lost a lot of respect in the eyes of the public,” she insisted.

“There’s been no devolved government for over 13 months, and I’m aware that there are plans underway to reduce their pay, but they’ve still been paid during that time. There needs to be accountability.

“The politicians just view health with a ‘blanket’ perspective, they don’t see the individual narrative; they don’t see how it’s affecting cancer services or orthopaedics, but if it was one of their own children I’m sure they’d be interested, and want access to services to be as effective and quick as possible.”

Kathryn added; “It’s frustrating as a parent and you do wonder if politicians knew, really knew, what was going on for people, then they’d be able to end the impasse, and that’s what I want them to do, for the sake of our health services."