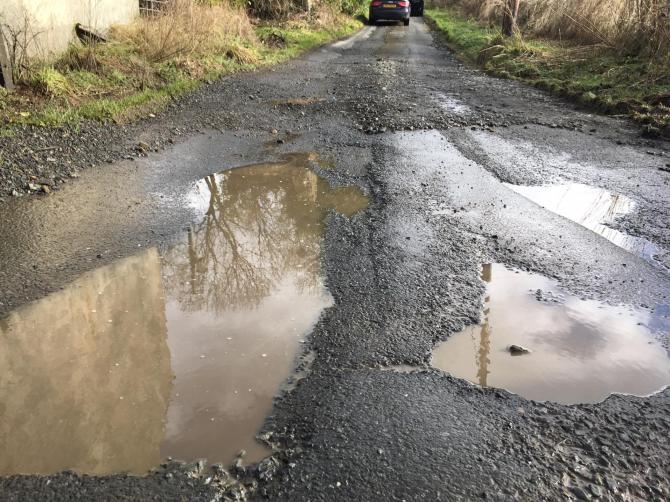 A REPAIR bill for potholes on local roads could run to millions of pounds the longer they are left in a state of disrepair, it has been claimed.

And there have been calls for an “urgent injection” of cash to allow the job to be done.

SDLP Councillor Thomas O’Hanlon has pleaded for the Department of Infrastructure to be given the necessary resources to conduct repairs and maintenance as local roads continue to fall into a worsening state of decay.

“Our road network is literally falling apart before our very eyes and nothing is being done about it,” he said. “Like other elected representatives I am passing through complaints from local residents on a daily basis and it’s simply not good enough that the network is just being abandoned and let crumble away.

“I know the staff in the local section office are exasperated – from admin staff taking calls and answering emails to the guys on the ground trying to do what they can, but something has to be done.

“We need to see an urgent injection of funds into making roads safe and passable.”

Councillor O’Hanlon said some repairs had been carried out over recent weeks.

But, he insisted: “It’s not enough – and what has been repaired is now as bad as ever again.

“To be brutally honest, you might as well be filling the potholes with snow.

“This is not just minor roads, it’s main trunk routes as well.

“The Monaghan Road out of Armagh is like the moon surface, potholes are deep and dangerous. On the Castleblaney Road at Carnagh, the road is falling apart in lumps.

“You can actually see meshing that was put in to try and hold the road fabric together.

“Drainage is so poor it is only adding to the problems. If surface water is not getting away, the water is lying in potholes and this is only making things much, much worse.

“You think you’re driving through a small puddle only to nearly lose the car in a massive pothole.

“Whist I am urging caution to motorists, they should expect more and expect better. We need to see more resources put into repairing local roads now – not next month – but now.

“The longer we leave the network to crumble, the more it is going to cost to repair.”