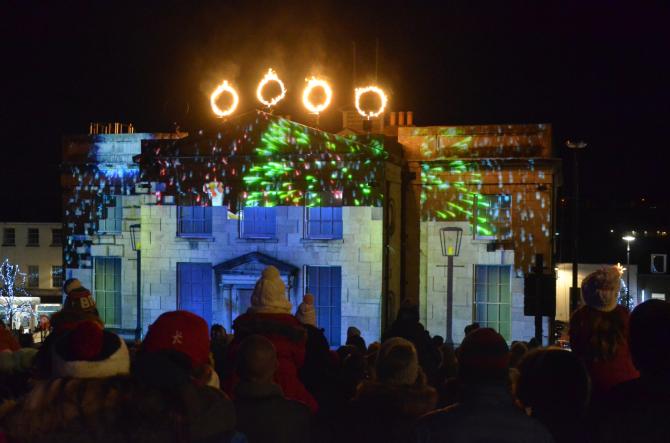 An independent evaluation reveals 12,000 tickets were issued for the light show finale at Georgian Day with 7,700 people then attending.

ALMOST £1 million was spent by visitors to Armagh during Georgian Day - with more than 26,000 people making their way to the city to kickstart the countdown to Christmas.

And there are already plans to extend the seasonal spectacular even further in 2018!

An evaluation of the big day has been carried out and the full results presented to Armagh City, Banbridge and Craigavon Borough Council.

Held at the end of November, the range of events has already been increased.

And, for 2017, the traditional Georgian Day was extended into a Georgian Weekend in a bid to get visitors to stay overnight and increase the revenue generated for city centre businesses and pumped into the local economy.

On the Saturday - Georgian Day itself - a total of 101 stalls were spread across the city centre, selling a mixture of high end artisan craft alongside Food Heartland producers.

The day, of course, culminated in the spectacular light show finale on the rear of the Market House building.

Mock trials returned to Armagh Courthouse, giving visitors an insight into the harsh reality of law and order in the 18th Century, while other new additions included the ‘Coffee and Gossip’ event in the Armagh County Club, a fan-making workshop in the library, sewing workshops in the ‘The Shades of the Past’ lighting experience, where images were projected on to many of the Georgian buildings on the Mall, guided night time tours bringing them to life and educating visitors of the stories behind the Georgian facades.

It cost close to £125,000 to stage events throughout the Saturday and Sunday.

But the feedback has been that it was well worth the effort and cost - with positive reviews and the tills telling their own stories for satisfied business owners.

An independent survey showed that a direct visitor spend was recorded in the region of £997,070.

More than 26,000 people came to Armagh and, of those who took time to complete the follow-up survey, an amazing 100% of respondents said they would “definitely” or “very likely” return for Georgian Day and recommend it to family and friends.
Some 92% rated the overall atmosphere as “extremely good”, with the same percentage also rating the organisation as “extremely good”.

For the light show - a ticketed but free event with four showings on the hour - a total of 12,000 had been allocated in advance, with 7,700 then attending.

Meanwhile, of the paid ticketed events over the weekend, information gleaned from sales showed that six per cent of visitors came from the Republic of Ireland, England, Scotland or Wales.

With such a glowing report card to work from, the wheels are in motion for 2018!

Many popular events will be returning, but there are also plans to develop the event further. These will include the expansion of the ‘Shades of the Past’ lighting experience into other areas of the city.

Contact has also been made with Camerata Kilkenny and David Power to perform ‘The Piper and the Faerie Queen’ at the 2018 Armagh Georgian Festival.

If secured, it would be a fitting performance and particularly appropriate for a Georgian Festival in Armagh, especially with the inclusion of the suite by Telemann - known as the Gulliver Suite - which was inspired by the great Georgian writer Jonathan Swift, who was Dean of St Patrick’s Cathedral in Dublin.

Organisers have also pledged to work with private residences and other Georgian properties not normally open to the public, in the hope of encouraging them to host events to “give visitors truly unique experiences at the festival”.

The council’s economic development and regeneration committee was presented with a paper outlining the successes and plans for 2018, with an application again to be submitted to Tourism NI’s event sponsorship scheme.

“The Georgian Festival is developing each year, creating new, unique and authentic experiences for visitors,” it adds.