Alex and Charlotte face seven other schools in culinary showdown 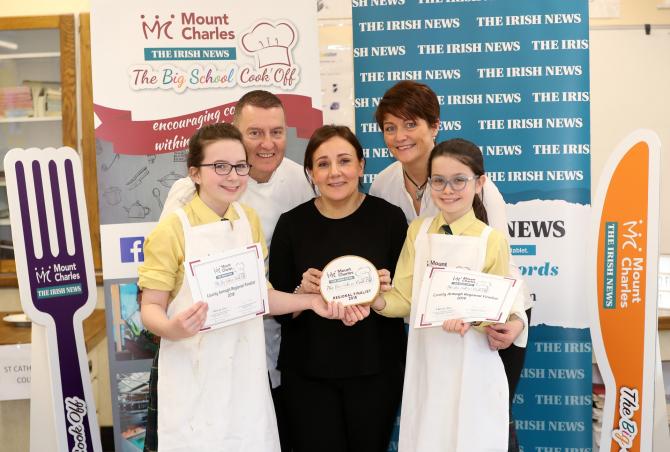 A TEAM of pupils from St Catherine’s College in Armagh have been named regional finalists in the 2018 Mount Charles Big School Cook Off, progressing to the grand finale later this month.

The Cook Off was created to inspire young people to think about healthy eating and food provenance, and to encourage them to consider a future career in the hospitality industry.

Almost 200 entries were shortlisted down to 52 teams of 11-14year-olds, who all participated in regional heats across the country to secure their place in the final of the cookery competition, which will take place at Belfast Metropolitan College, Titanic Quarter Campus, on March 21.

Mrs Marina Feeney, Home Economics teacher at St Catherine’s College, Armagh, expressed their delight at the girls’ success.
“We are just ecstatic to be named a regional winner at the Big School Cook Off,” she said. “The girls worked very hard and put a lot of thought into their dish, and it’s been a steep learning curve to master such a high-skill dish.

“We’re really excited about the grand final and looking forward to showcasing what we can do!”

Caitriona Lennox, Big School Cook Off Ambassador at Mount Charles, commented: “The competition at each of these regional heats was fierce, and the teams that have reached the grand final of the Cook Off should be proud for beating such stiff competition!

“Each team was asked to cook a main course for two people, based on local produce and with a budget of £5 per meal. We had a wonderful variety of dishes, from Tayto-topped fish pie to Killybegs salmon to Gracehill black Pudding, all demonstrating what can be achieved on a tight budget and with just an hour to prepare, cook and serve a dish.

“We’re in the business of catering and I can honestly say we have some future chefs in our midst – the creativity, knowledge and skill on display was fantastic to see. Good luck to all of our budding chefs in the final this March, I’ve no doubt we’re going to see some serious talent on display.”

Each county winning team has won £200 for their school and a masterclass in cookery from Mount Charles Group Development Chef, Simon Toye, previously Executive Chef at the Michelin-starred Deanes restaurant in Belfast.

The overall winning team at the grand final will win £300 for their school, as well as a treat for their family, with a meal at the award-winning George’s of The Market restaurant and family tickets to see the Belfast Giants ice hockey team at the SSE Arena.