'We want a living, breathing Cultúrlann in the heart of Armagh' 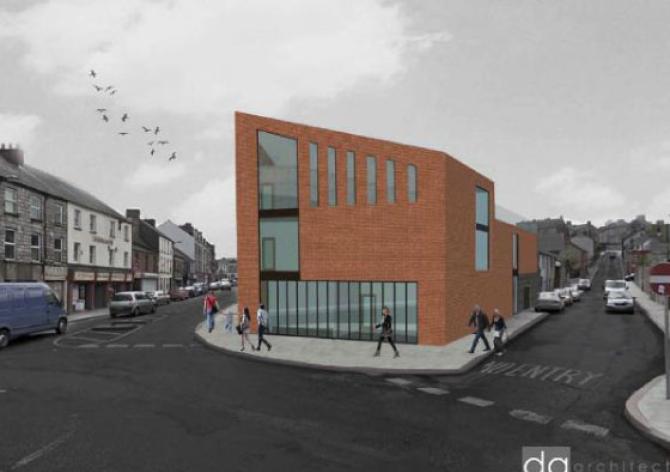 A computer-generated image of how the £2m Cultúrlann will look when it is completed in 2019.

“THERE’S  a confidence now about speaking Irish that wasn’t present 20 years ago, when there was a perception that it was just spoken by academics in small elitist gatherings, far from the prying eyes of the public. There was a snobbery about it…. well fast-forward two decades and the language movement, the campaigns, which have been youth-led, has changed all of that. There is now a generation of young people who are embracing it.”

Those are the words of Gearóid Ó Machail of Cairde Teo, the award-winning Irish Language Social Enterprise group – as he reflects on the resurgence of interest in the language as it coincides with the £2m Cultúrlann project entering into its final stages.

Due to open around March 2019, the Aonach Mhacha Irish Language and Culture Centre will transform the site of the old fire station on Upper English Street into a ‘hub’ where Irish language classes, culture events such as musical performances will take place. It will also provide space for social enterprises, exhibitions and will boast a cafe and a daycare facility.

Cairde Teo has been involved in the project under the collaborative social enterprise group, Aonach Mhacha, which has been the driving force behind the scheme. Ten years ago when plans for a Cultúrlann were first envisioned, revealed Gearóid (who says the idea emerged from a “very organic, grass-roots level” when he received positive feedback from a public meeting he organised) it was a very different cultural landscape for Irish speakers. “Back then I saw it [the Cultúrlann]  as a kind of an oasis, a place for people to come together away from everything else,” he says. “Now I see it with one eye to heritage and another eye looking to the future, looking outwards.”

He attributes the change to not only the renewed interest in people, particularly young people, wanting to learn Irish, but also to the changing demographics of the city itself, with a vast array of different languages now heard on Armagh streets. “Armagh has become a multi-culture, multi-ethnic place. There’s now a multitude of languages that can heard and that’s made people aware of cultural identity,” he explains.

That has been reflected in the ethos of the Cultúrlann, which Gearóid says is open and embracing of people of all cultures and backgrounds. “It’s not merely for Irish speakers. If you’ve ever been to centres in Belfast or Derry you do get visitors, indeed international visitors, who want to hear the language in a social environment. There will be classes in Irish but there will also be classes in Polish, Polish, Bulgarian, Lithuanian and Russian. We want to give that multilingual feel about it, and that all cultures feel at home in it. We were very keen to ensure the building’s design is vibrant,” he adds. “We don’t want a sterile office block, we want a living, breathing centre. We need the community to buy into it from the outset.”

Twelve core tenants are set to move into the centre, including an Irish media production company that will offer training to young people, as well as artisan craft makers – all keen to sign up to the centre’s social-enterprise principles. The centre itself will create between ten to 12 new posts, with the additional social enterprises bringing in their own teams.

Beyond that, he hopes by the transforming the derelict site, the centre will bring a boast to its immediate vicinity, taking in The Shambles as well as bringing wider economic benefits to the surrounding area as well as increasing tourism. “We’re physically renewing the a derelict site and bringing it back into public use. It’s situated in the Callan Bridge Electoral area which is one of the most deprived areas in the borough,” he reveals, referring to official statistics.

“There’s also been a shift in recent years from The Shambles to Market Place and we want to boast the evening economy in The Shambles by increasing footfall, holding concerts and performances, regenerating the area.”

The centre’s audience capacity will be around 100, and Gearóid is keen to bring the Market Place on board to host the centre’s bigger performance events. “We’re not in competition with the Market Place, it’s about complementing it. The events we’re keen to hold are not mainstream like the ones that would run in the Market Place, but they do have dedicated audiences and they will bring people in from outside of Armagh.”

In fact, the centre’s position is ideal for attracting tourists and visitors, adds Gearóid. “It’s right at the gateway of the Armagh’s heritage conservation area. Armagh is billed as the city of St Patrick and we’re situated right between the city’s two Cathedrals. We have the wonderful 18th century architecture of the city and the Irish language adds a lot to that history. It’s the language that was spoken in Armagh 2,000 years ago, and a lot of the focus has been on the wonderful architecture so perhaps Irish, Gaelic has been underdeveloped, but by tapping into that we can attract more visitors to the city.”

The centre, then, will give a “more visible manifestation of the Irish cultural identity,” and will no doubt be a landmark for the city’s young people who attend Irish Medium schools. Recently Armagh witnessed the official launch of its third Irish Medium nursery, Naíscoil na Caille and there are also plans, reveals Gearóid, for the city to get a second Irish Medium primary school in the future. “It’s at a very early stage,” he stresses. “We’re at a public consultation stage and looking at identifying possible sites.”

Looking shorter term, meanwhile, the Cultúrlann’s location is well chosen,  Gearóid explains. “The centre itself is located close to schools, thousands of them - many of whom will be learning Irish - will be passing on their way to the schools every day. So we’d like them to call in and enjoy socialising there.”

He is, therefore, assured that the language’s future lies with the current generation of young people who are now using it beyond the classroom, unlike perhaps, previous generations. “There was a time when if you spoke Irish to a young person on the street who knew the language, and they wouldn’t have spoken back to you out of embarrassment. Now ten years later on the cusp of realisation of the project, we’ve noticed a real confidence in young people. I know that when I’m walking down the street that I’m hailed as much in Irish as in English,” he says.

It’s no surprise, then, that Armagh’s growing reputation for promoting Irish has garnered the attention of supporters far beyond the city and county. “Outside of Belfast and Derry, Armagh really is considered to be the rising star of Irish community language development,” reveals Gearóid.

On a personal level, meanwhile, when the centre does open its doors in around 12 months time, it will be the culmination of long-cherished goal for Gearóid. “I’ve devoted ten years of my life to this project on a voluntary capacity, with it impacting on every aspect of my life. My own children went through Irish Medium education and I felt compelled, or an obligation in some senses, to give them some opportunities in what is the first language of our own family.

“What is satisfying now is that young people have embraced the linguist diversity. Ten years ago you wouldn’t have any other language spoken on the streets of Armagh than English, now there is a multitude of languages being heard,” he says.